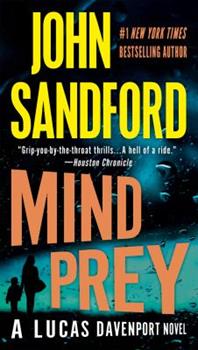 (Book #7 in the Lucas Davenport Series)

Lucas Davenport has met his match-a brilliant, wanton killer who knows more about mind games than Lucas himself. This man is more depraved and intelligent than anybody Lucas has tracked before-and with a female psychiatrist in his trap, he's already one step ahead of Lucas...

Seventh in the Prey series

Published by Thriftbooks.com User , 20 years ago
Lucas Davenport faces a new challenge in Mind Prey. He is not hunting a killer through clues left at a murder scene, but instead is trying to find a kidnapped family, who may still be alive.Davenport's fame helps him out because the killer cannot help but call him and challenge him to a duel of wits. Lucas and his team must unravel clues given by the kidnapper, as well as decide who would profit the most from the families death.If you have read the other Prey books, you will be happy to know that Lucas' love life is still cruising along in one-woman gear. I would also add a warning that, although Sandford does not describe the attacks in detail, the woman who is kidnapped is repeatedly raped and beaten. If that sort of thing disturbs you, you may want to skip this book.Read this book, and keep reading the Prey series.

Published by Thriftbooks.com User , 20 years ago
I have read several Prey books. My favorite until now was Winter Prey, but Mind Prey may be the best one yet. They are pretty close. In Mind Prey, John Mail kidnapes a women and her two daughters. She is a Dr. who has treated John before for mental depresion. Really a nut. He carrries them to a old farm house. There he begins to rape the mother. The youngest daughter is carried away. The mother is told he carried her to a Wal-Mart and let her go, but did he???? Lucus it called in to try and find Mail and the woman and girls. The action is great. The mind games Mail and Lucus play with each other is very good. I loved the ending. Goody, goody. Through out the book Lucus is also trying to find a way to ask Weather to marry him. Does he ever do it???? A very good read if you like scary stories.
Copyright © 2020 Thriftbooks.com Terms of Use | Privacy Policy | Do Not Sell My Personal Information | Accessibility Statement
ThriftBooks® and the ThriftBooks® logo are registered trademarks of Thrift Books Global, LLC