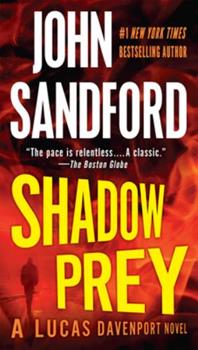 (Book #2 in the Lucas Davenport Series)

A series of ritualistic murders committed across the United States draws Lucas Davenport into an unimaginable conspiracy of revenge in this "classic"( Boston Globe ) thriller in the #1 New York Times bestselling series. A slumlord butchered in Minneapolis...A rising political star executed in Manhattan...A judge slashed to death in Oklahoma City... Each victim has a history of bad behavior, but the only thing the killings have in common is the murder...

Published by Evie , 2 years ago
great quality and love the retro cover

Published by ss , 2 years ago
enough action and surprise for all

Sanford is a master storyteller, with a blazing pace

Published by Thriftbooks.com User , 12 years ago
Synopsis In the early sixties, a brutal crime is committed against "a drunk Indian chick" by two small-town cops, while on duty. Retribution is a long time coming - some 20 years pass before a plan is set in place to avenge the young girl's attack, long enough for one of the guilty cops to become the Director of the FBI. Atoning for his sins will surely make the headlines. A new age Indian uprising is about to take place, well-planned and organized by two aging men and a small band of Indian brothers who have not forgotten what two white men did to an innocent young girl so many years ago. Assassination is the order of the day - death in an acutely Indian way - throats cut by a ceremonial stone knife. A slumlord and a racist probation officer in Minnesota were the first two victims, a welfare officer from Jersey the third. Lucas Davenport returns as the street-wise police detective assigned to investigate the murders, along with New York City Detective Lily Rosenthal. They have little time to waste, as the body count continues to escalate. A promising young politician and a federal judge fall victim to the cold-blooded murderers. Shadow Love, a rogue tribal member of the conspirators, is not in the plans for the new-age uprising. He is a violent psychopath who is far too unpredictable to follow the directions of the tribal elders who are dictating the action. Despite their futile efforts, Love steps in and takes it upon himself to contribute to the body count, and nearly kills Lily in the process. The case suddenly becomes more personal for Lucas, and he acts with extreme prejudice in his revenge, making for an exciting and suspenseful conclusion. * * * My Two Cents Worth In Shadow Prey, John Sanford proves himself a very capable storyteller. The plot is clear, concise and proceeds at blinding speed. The Indian characters are presented as a brutal and determined adversary, with an almost noble cause. The subplot involving the intimate relationship between Lucas and Lily is graphic and aggressive. Lily, with a husband and children back in New York, briefly struggles with her attraction to Lucas, but her guilt is short-lived. Their torrid affair doesn't inhibit the action of the story, and it does provide a brief diversion from the intense drama of the murders. This also presented itself as a major character flaw for Lucas, who has a child by his girlfriend, a fact he is quick to overlook when the opportunity presents itself to be with Lily. I could hardly put this book down. Even with the early introduction of the identity of the killers, I found it captivating. I normally prefer a little mystery in the crime/thriller genre, but it just worked for me. I look forward to reading other books from the Prey series, but I thought this one stood on its own merits as a novel. Paperback 342 pages 3 1/4 hours

Published by Thriftbooks.com User , 14 years ago
Following after Rules of Prey (Lucas Davenport Mysteries), "Shadow Prey" gives us a complex problem to mull over while providing all the action and suspense we could hope for. Murders are taking place - not only in Minneapolis - where the victim's throat is cut and the suspect is Native American. The reader is given the chance to know why these murders are being committed - and the reasoning is strangely compelling, leading one to almost sympathize with the instigators - as well as following the trail with the police. Davenport is often frustrated, as his normal contacts do not include very many Native Americans, and to make things worse, after a near miss he begins to exhibit signs of going through a severe depressive episode, or at the very least post-traumatic stress disorder. As the police follow the trail, bodies begin to pile up and Davenport worries that time is running out for the big finale, whatever that may be. I don't wish to give any more information about the plot than this, so as to avoid spoiling it for anyone. Do yourself a favor and give this wonderful series a chance! This is my second time reading through the Lucas Davenport mysteries, and they do not disappoint the second time around. I heartily recommend these to anyone who likes a good thriller, police procedural or action-oriented mystery.

Published by Thriftbooks.com User , 20 years ago
In his second outing, Lucas Davenport hunts a family of disgruntled Native Americans who have big plans for a political bad guy (who really does deserve to die.) He also meets a new woman, and you may find yourself not liking him very much afterwards. However, by introducing us to the many faults of Davenport, Sandford goes a long way in making him even more real. And, if you keep reading the Prey series (and you should) you will find yourself taking satisfaction in Lucas' maturation process as much as in his hunting down the bad guys.Read this book, and keep reading the Prey series

Published by Thriftbooks.com User , 20 years ago
In this second "Prey" novel, the Crows and their son, Shadow Love, are out to settle an old score with the Director of the FBI for sins he committed years ago. Lucas Davenport, Minneapolis-St. Paul detective and new father, is assigned to work with attractive Lily Rothenberg, an NYPD detective, as they hunt a killer who uses an obsidian knife with special meaning and power to Native Americans. John Sandford creates a powerful, action-packed thriller that deftly combines the two plot lines as he continues to build the strong and complex character of Lucas Davenport in this second Prey novel and sequel to "Rules Of Prey". Highly recommended (especially if you've never read any of Sandford's or John Camp's earlier work).

Published by Thriftbooks.com User , 24 years ago
I enjoyed this book more than the others in the Prey series because I am a Native American, and my last name is Love. The characters may have been homicidal, but they also had pride and character. Lucas Davenport is very intense and a bit homicidal himself. Excellent thriller series, Sandford never weakens, his stories are always strong, intense and complete
Copyright © 2020 Thriftbooks.com Terms of Use | Privacy Policy | Do Not Sell My Personal Information | Accessibility Statement
ThriftBooks® and the ThriftBooks® logo are registered trademarks of Thrift Books Global, LLC