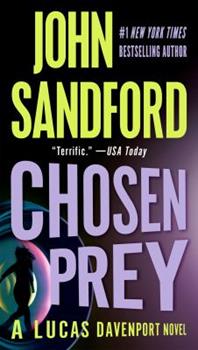 (Book #12 in the Lucas Davenport Series)

He seems like such a nice man. You'd never guess what was going on in his mind... Art history professor James Qatar has a hobby: he takes secret photographs of women to fuel more elaborate fantasies. When he's alone. Behind locked doors. Then one day, he goes a step further and... well, one thing leads to another. Qatar has no choice. He has to kill her. And you know something? He likes it. When Deputy Chief Lucas Davenport takes the case, he assumes...

Published by Thriftbooks.com User , 17 years ago
This is my first book in the "Prey" series and John Sandford had me hooked in the first chapter. James Qatar is killer, a man who likes to seduce women then strangle them. Qatar has other perversions, such as photographing women from afar and turning those photos into pornographic drawings and mailing them to the women anonomously. Qatar's latest potential victim is Ellen Barstad. Qatar seduces her and lays the groundwork for another killing when Barstad surprises him by being a willing sexual partner. Thus their relationship continues. Lucas Davenport and his band of police officer friends enter the scene later, investigating a cold case where the body was finally found. Finding the body causes the police to look closer at the case. Several clues allow Davenport to proceed in the case. The dead woman found had a pornographic drawing of herself in her apartment. Then several other women come forward who have drawings but have no idea where they came from. Then a police chief from Wisconsin comes forward and reveals they may be dealing with a serial killer because his neice may have met the same fate. Chosen Prey's strength is the police investigation. They work hard for their info and at times seem to be getting nowhere. Still they slowly make progress and get closer and closer to Qatar. Sandford doesn't make it seem easy like some other authors tend to do. One complaint I have is, after all of the thorough police investigations, the way in which Qatar's identity is found has nothing to do with police work. Qatar is a quality villian who seems to have covered all his tracks, yet through some convenient finds and plausible twists, justice is done. This series is one I plan to continue to read because besides telling a great story, Sandford doesn't let the personal lives of the characters interfere with the book. Its easy to pick up and follow the lives of Lucas and his fiance Weather.

"Prey" Series Back to Top Form!

Published by Thriftbooks.com User , 20 years ago
The consensus with the last book in the series, "Easy Prey" was that Sandford had burned out with the "Prey" series. "Easy Prey" fell well short of the quality of book readers have come to expect from the "Prey" Series. But Sandford proved us wrong. "Chosen Prey" is equal to, if not better than, the original books in the series. The intensity level and the suspense were excellent -- even though you knew the murderer from Page One -- or perhaps BECAUSE you knew. And Davenport was back to being the Lucas Davenport readers have come to expect and love. For all the fans who have loved the "Prey" series from the start and wished they had waited for the paperback to come out with "Easy Prey," you DON"T want to wait with "Chosen Prey." You'll want to buy it today. And probably read it in one sitting!

Published by Thriftbooks.com User , 20 years ago
All of us Sandford fans deeply look forward each year for early May to come around because that mostly means the release of a new Prey novel! In "Chosen Prey," Minneapolis Detective, Lucas Davenport, along with Marcy Sherrill, Sloan, Del, and Weather (Lucas fiance), return in one of John Sandford's most interesting and exciting Prey novels that he has written. The plot: James Qatar is a prestegious history professor at St. Patrick University in Minneapolis. He has a very secretive life on the side. He enjoys playing kinky sex games with women he barely knows and ends up killing them for pleasure. He also enjoys taking pictures of women and distorting their figures to look like they are participating in grotesque sexual activities. His method of murder: a rope. James Qatar is a very sick individual that has killed over eight women in three states. None of the cops have been able to link him to the murder. When a murdered women turns up in the barren woods, close to home to Lucas Davenport, he vows to find this killer who killed this beautiful woman. After investigating for a while, and with the assistance of and out of state officer, he discovers that three other women have mysteriously disappeared in Wisconsin. All these murders/ disappearances are connected. Can Davenport and the gang get James Qatar before he claims his next victim? The twelfth novel in this amazing series is a definite success!

DAVENPORT...BACK IN A MASTERFUL NOVEL

Published by Thriftbooks.com User , 20 years ago
He desires women, all women, many different types of women. He studies their beauty. He takes pictures of them to create art masterpieces. He takes the pictures one step further...digitaly enhancing them, and turning them into repulsive works of pornography. His desire for women, and his "art" is taken a little further by murder...After his first killing he realized he liked it, and wanted more.When the body of Julie Aronson is found, Lucas Davenport is called to the crime scene. The body has been dead eighteen months, and Davenport does not have a clue, except the photo of the girl when she was alive.When several other women come forward to explain how they were also photographed by a man, for art purposes, only to find their photos have also been altered into filth, Davenport knows he is on the trail of a psycho.As each killing becomes more daring, Davenport and his usual gang of coherts go head-to-head with a monster with one thing on his mind...blood.While 'Chosen Prey' discloses the killer's identity early on, the reader is still plunged head first into a suspenseful ride, with twists and turns to keep the pages turning. As always in a 'Prey' novel, the characterization is rich, and the plot razor sharp.John Sandford has been writing the 'Prey' series for many years, and some of the entries are good, and some are not so good, 'Chosen Prey' is one of the best; the plot races along combining page-turning action, and the emotional drama surrounding it's main characters guaranteed to keep readers up all night.Fans of this series will not be disappointed.

Published by Thriftbooks.com User , 20 years ago
Colleagues respect St. Patrick University associate professor art historian James Qatar for his collective works. This includes one book and several scholarly articles published in highly regarded journals and magazines. Unbeknownst to his peers is that Professor Qater has a second life in which he hunts blondes, has sex with them, and kills them.When an early victim is found, the police link her to photographs that are part of Qater's hobby of creating pornographic works with women he knows but who don't really know him. Being a political appointee, Minneapolis Deputy Chief of Police Lucas Davenport expects to lose his job within six months when the mayor retires. Lucas intends to use his time wisely to catch the killer.John Sandford is one of the top authors of police procedurals due to his three dimensional characters that consistently turn the "Prey" books into great reads. The hero is a flawed individual with a complex and realistic personal life that places demands on him even as he risks everything because he believes in the value of justice for all. CHOSEN PREY is the best of a great series. The audience knows the identity of the killer early on, but watch in fascination as Lucas tries to do likewise while balancing his complex personal life.Harriet Klausner
Copyright © 2020 Thriftbooks.com Terms of Use | Privacy Policy | Do Not Sell My Personal Information | Accessibility Statement
ThriftBooks® and the ThriftBooks® logo are registered trademarks of Thrift Books Global, LLC