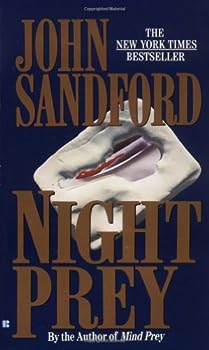 (Book #6 in the Lucas Davenport Series)

A savage psychopath is playing cat and mouse with Lucas Davenport. But both killer and detective find themselves at odds with a female investigator who has intensely personal reasons for catching the... This description may be from another edition of this product.

Published by Thriftbooks.com User , 15 years ago
I'm working my way through John Sandford's Lucas Davenport series, strictly in the order they were published. This is book number 6 and I have to say Sandford is definitely getting better and better. Following 'Winter Prey', the porsche driving, game writing, definitely hard-boiled Davenport continues to evolve as a believable and somtimes not too likeable character. His romantic interest, Weather Karkinnen, has becomes a fixture in Davenport's home. Weather played a major role in the last book, actually saving Davenport's life when a gunshot wound to the throat stopped his breathing. Prior to Weather, Davenport has produced a daughter from a previous relationship with a journo, Jennifer. The reader is left to wonder how Weather came to move to the city, given Sandford had oulined the duty she felt to the small town that had paid her college tuition (in Winter Prey). Weather has now been installed as a surgeon in the big city, we just have to wonder about her lifespan and safety as Davenport's lover. Aside from that, there is also an undercurrent of erotic tension between Davenport and a female reporter in this book. Maybe it's cos I'm a woman, but this aspect of Davenport's nature really irritates me! You want the man to be faithful and here he is spieling about how women with overbites are deliberately hired as news anchors because this facial anomaly reminds men of oral sex! Interesting fact? It got me thinking, which I like in a crime book, but you have to wonder what's going on in Sandford's mind! I guess this is a realistic insight into the secret lives of men as channelled by Lucas Davenport. Us girls can like it or lump it. In 'Night Prey' we have Davenport unwillingly teamed up with a State investigator who has terminal cancer. Connell is obsessed with this case, tracking down a serial rapist and murderer, before she succumbs to her illness. Sandford gives us a dual narrative, interspersing Davenport and his teams' point of view with that of their quarry "Koop". Stanford has really nailed the creep factor with this guy. He is smart, strong, perverted and frightening. The initial scene has him in the bedroom of the woman he is to become obsessed with, during a cat burglary. Something about Sara Jenson triggers Koop to escalate his deviant behavior and to begin literally killing in her name (or initials). He creeps her apartment, stalks and watches her. Stanford has created a nightmare perp in "Night Prey"; Koop is also incredibly savvy about important things like evidence and is determined not to make any errors that will lead Davenport and his team in his direction. This of course makes for great reading and a lot of frustration for Davenport, Connell and the cops that have featured before in the series, Del and Sloan. Stanford has created great characters that move with the times. Lucas' extremely profitable game writing hobby is morphing more towards creating simulations for law enforcement officers. This b

A night with Sandford's "Prey" is a night well spent.

Published by Thriftbooks.com User , 18 years ago
John Sandford's "Prey" series is a delight. I've read four so far and each has been an adventure. Lucas Davenport is a Minnesota cop, with the City of Minneapolis in early "Prey" novels, the State of Minnesota in later ones. The plot is almost beside the point. A corpse is discovered and so on. Sandford's characters are richly detailed and believable. His plots are inventive and not so far out that you have to swallow credulity to keep moving. Fun reads. And what higher compliment can I pay? Jerry

Published by Thriftbooks.com User , 22 years ago
This was the third book from the Davenport series that I have read and easily the best. I liked the feeling of impending doom with the main characters racing against time to catch the killer before he can strike again and before one of the investigators dies of cancer. The eventual solution of this pending collision caught me by surprise. And, in case this wasn't enough, Sandford threw in a locked room murder mystery as a clever subplot. If anyone in Hollywood ever wants to bring a Lucas Davenport thriller to the screen, this would be a good one to start with.

Published by Thriftbooks.com User , 23 years ago
Again a great mystery by John Sandford. His characters are real and credible characters with all their attractions and mistakes. Even the monsters are not those we find in horror novels, but we can read about them in the newspapers every now and then. There are people like this, and Sandford describes them and their motives and pains in an almost clinical way. And again he proves with this book that he is one of masters of suspense. A must for mystery fans.
Trustpilot
Copyright © 2022 Thriftbooks.com Terms of Use | Privacy Policy | Do Not Sell or Share My Personal Information | Accessibility Statement
ThriftBooks® and the ThriftBooks® logo are registered trademarks of Thrift Books Global, LLC