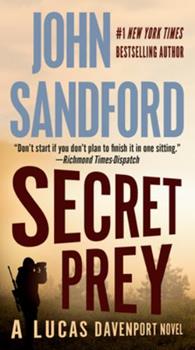 (Book #9 in the Lucas Davenport Series)

A wealthy banker is dead, shot once in the chest during a hunting trip. There are many reasons for him to be killed, and many people who would do the deed. But who did? Lucas Davenport has an idea. But this routine murder investigation is about to turn into something different. A cat-and-mouse game with a killer who does not hesitate to take the fight to Lucas himself. And those he loves... WITH A NEW INTRODUCTION BY THE AUTHOR

Published by Thriftbooks.com User , 16 years ago
In a series of books all based around the same police officer I would've thought that by now the books would've become extremely repetitive and similar. I would think that every book would follow the same format, with different names and methods of killing. However, thus far I have not been disappointed (outside of a very small number of instances). This book takes a totally different approach to Lucas Davenport's case files. This book starts out with the investigation of a single murder. Most of the books so far have been about serial killers or multiple homicides. Multiple murders is one way to keep the action level in a book up. This book focuses more on the complex relationships of those close to the victim. The group of people is all top executives at a major bank. The psychology of the characters is what makes this book interesting. We also see Davenport drifting back into depression at the beginning of this book. When the killer gets revealed and tries to stay innocent-looking a few more murders pop-up. There are also some more murders in the past that come to light and the investigation into those take Davenport into some interesting situations. The slower pace of this book is definitely refreshing. I think it adds an element to this series that make the series as a whole more credible because it is not trying to sell books on the same old formulae. This book gets the full five stars, and not for the same reasons I gave "Sudden Prey" and "Eyes of Prey."

A whodunnit by Sandford

Published by Thriftbooks.com User , 16 years ago
I think John Sandford is one of the better mystery writers working today. Most of his books pit Lucas Davenport in a Cat and Mouse chase against the known perpetrator -- this book is more of an "Agatha Christie" type book where you don't know who did it until the evidence unfolds. I don't want to give it away, but the bad guy is one of the more evil "perps" you will ever read about.

Published by Thriftbooks.com User , 20 years ago
In the ninth installment of the Prey series, Lucas Davenport has to sort out a hornet's nest of suspects with motive to determine who killed the board chairman of a local bank.Sandford does a great job of setting up the reader for the surprise villain. This is a little different than other 'Prey' books, because the bad guys are usually more apparent.Also in this new 'Prey' book, Lucas' personal life takes a hit in the form of an awkward estrangement from his fiancé. Because I have enjoyed watching Lucas Davenport mature from a womanizing hound to an in-love romantic, this development was hard to take, but I am sure Sandford knows best. He has so far, anyway.If you have read other books in the 'Prey' series, keep reading. If not, well what are you waiting for? Read them now.

Published by Thriftbooks.com User , 22 years ago
All of John Sanford's "Prey" novels are excellent! I often go back and reread all of them when a new one comes out. Which is why I was a little surprised by the complete abandonment of Weather. In "Night Prey" when Lucas and Weather were getting together, she insists that he come and watch her operate...afterwords, (ppg. 168-169) she explains to him that her job requires her to be "cold. I can't get involved. I like patients ...but I can't afford to go into the operating room wondering if I'm doing the right thing..." She also says that in her "surgeon persona" she is "different" and that she "has to make brutal decisions." When Sandford paired these two up, I thought he had finally written a woman who was right for Lucas...who wouldn't always agree with Lucas' actions, but could understand and be there for him. It is a shame that Mr. Sandford made a pretty critical change to this part of Weather for a storyline, but maybe he'll being her back. The "Prey" series is a must read for anyone who likes mystery/thillers and/or serial novels. Mr. Sanford is arguably the best in this genre especially with the depressing, character-killing, uninspired work that Patricia Cornwell had been churnning out. I reccomend all 9!

Published by Thriftbooks.com User , 23 years ago
This man can write. He knows people. He knows business, and he has used all of this to write an utterly facinating book--again. Sandford's books' strength has always been his people and his sense of place. This time he has added characters, that still read like real people, but now some of them have varying levels, but always accurate, insider knowledge about the arcane world of business. This all by itself is a tour de force. Read this book, you will like it.
Copyright © 2020 Thriftbooks.com Terms of Use | Privacy Policy | Do Not Sell My Personal Information | Accessibility Statement
ThriftBooks® and the ThriftBooks® logo are registered trademarks of Thrift Books Global, LLC