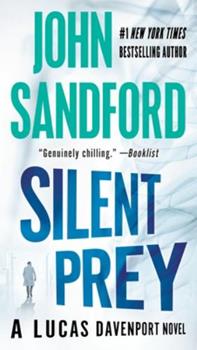 (Book #4 in the Lucas Davenport Series)

Make noise for a new Prey package and new author introduction Dr. Mike Bekker, a psychotic pathologist, is back on the streets, doing what he does best--murdering one helpless victim after another. Lucas Davenport knows he should have killed Bekker when he had the chance. Now he has a second opportunity--and the time to hesitate is through.

Published by Thriftbooks.com User , 21 years ago
A killer from one of Sandford's earlier books, Eyes of Prey, escapes. He's quickly back in business and isn't easy to find. Silent Prey brings the reader and Minneapolis Police Investigator, Lucas Davenport, to New York City in the hopes of finding serial killer Michael Becker. While there, Davenport is also asked to look into some serious police corruption within the department. An exciting addition to the Lucas Davenport series. Read Eyes of Prey first and follow it up with Silent Prey.

Published by Thriftbooks.com User , 22 years ago
Way to go Davenport AND your love interest survived this time! Maybe the Davenport curse regarding relationships with women has been lifted? Like "Eyes of Prey" finished this one in two evenings also. Overheard a woman in our local bookstore tell the clerk that her mother had read all of Sandford's book and I can see why she read the whole series. Sandford is like popcorn, once you start his books are hard to put down.

John Sanford is phenomenal, the "Prey" is the best ever!!!!!

Published by Thriftbooks.com User , 22 years ago
As an avid "Prey" fanatic I can truthfully tell you that this is an awesome book, in an awesome series, written by an awesome writer. If you're into serial killers, man hunts, graphic depiction, then this book and series are for you. When you finish the "Prey" series check out "The Night Crew" you won't be disappointed.

Published by Thriftbooks.com User , 25 years ago
The best to date in John Sandford's "Prey" series! Lucas Davenport's original nemesis, Dr. Michael Bekker, is back after escaping from custody and is back to his old tricks! Sandford's ability to keep his books in your hands (I took it to work with me one day!) never falters. I was actually disappointed when the book ended; I wanted to read more! I'm a big fan of the "Prey" series anyway, but I'd recommend this one to any mystery fan. A word of warning: if you buy this one, you may as well buy the rest of the series. You'll be back at the bookstore within the week!
Copyright © 2020 Thriftbooks.com Terms of Use | Privacy Policy | Do Not Sell My Personal Information | Accessibility Statement
ThriftBooks® and the ThriftBooks® logo are registered trademarks of Thrift Books Global, LLC