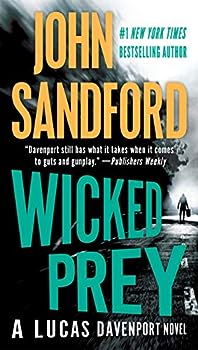 (Book #19 in the Lucas Davenport Series)

This description may be from another edition of this product. For twenty years, John Sandford's novels have been beloved for their "ingenious plots, vivid characters, crisp dialogue and endless surprises" (The Washington Post) , and nowhere are those more in...

One of his better Prey books

Published by Thriftbooks.com User , 11 years ago
John Sandford has been writing the Prey novels for so long that I don't think anyone, at this point, even wonders what the titles mean anymore. At best they have a little bit to do with the plot; often, they just sound cool. They're fairly interchangeable, at this point. Thankfully, the books themselves aren't: they're distinctive, intelligent, and interesting. Wicked Prey (the title could have applied to any of the books in the series) is one of the better entries that Sandford's penned, an amusing look at the Republican Convention and the things that might (could) happen while it occurs. First, Lucas Davenport has to deal with a group of thieves. They have, in the past, specialized in armored car robberies, but the guards are getting more sophisticated, the cops are getting better at catching the people who rob them, and they killed two guards in New York, so the robbers decide to change targets. They have a woman who organizes the jobs for them, and she's devised an interesting way to get money from people, without anyone the wiser. It involves things going on at the Republican Convention (the author makes it clear that the Republicans were chosen only because that's who they got the info on; it also helps that the author sets his books in the Twin Cities), and the people being robbed will have reason to conceal what's occurred. Simultaneous with this, a pimp who blames Lucas Davenport for all of his troubles has decided to stalk him, and see whether he can do something, presumably involving Davenport's foster daughter. And piled on top of that there's a crazy with a .50 caliber rifle wandering around town. He's apparently sighting the gun in for a shot that looks to be almost half a mile, which (if he can make the shot) would be almost impossible to prevent, in terms of assassinating a prominent person; remember, John McCain is going to be at the convention, so everyone's nervous. This was an amusing Prey novel, with an interesting bad guy, one who's not all bad. He's a bit like Robert DeNiro's character in the movie Heat, a working class guy who is generally moral and upstanding, it's just that he robs people, and occasionally kills them. I enjoyed the story and would recommend it.

Published by Thriftbooks.com User , 12 years ago
John Stanford does it again! I love his Lucas Davenport. The story was fast paced and took it's usual Sandford twists and turns. And I always find it amusing when that "F***ing Flowers" is mentioned even nobody knows why Virgil Flowers is called that name.

Published by Thriftbooks.com User , 12 years ago
John Sandford's WICKED PREY (9780143144526, $39.95) pairs actor Richard Ferrone's award-winning narrative voice with the story of one Lucas Davenport, whose teen daughter becomes the target for a psychotic sniper who blames Davenport for his shooting. A dangerous cat-and-mouse game evolves in this fine unabridged presentation (those who wish abridged may also enjoy Ferrone's smooth voice in an abridged version).

One of the Best Lucas Davenport Books So Far

Published by Thriftbooks.com User , 12 years ago
In his nineteenth edition to the Lucas Davenport Prey series, John Sandford proves beyond a reasonable doubt that somethings will never grow old or tired. The hero, Lucas Davenport, is up to his neck in problems in WICKED PREY. WICKED PREY has three different crimes running at the same time that seem to weave in and out of each other, all the while the Republican Nomination Convention sets the stage for limited resources and manpower in the background. On the forefront there is a gang of armored car robbers looking for a big score, a man with a rifle looking for weaponry for a 750 yard shot, and Randy Witcomb (from previous Prey installments) looking to settle the score with Davenport. Sandford excels in painting the life of a law enforcement official, from the slow times of walking the beat to the climatic shootouts, and WICKED PREY is no exception. The writing style is so elegant in the portrayal of the life looking for criminals, hoping for breaks, and running around in the thick of chaos. As he has proven time and time again, nobody writes a better criminal apprehension story than John Sandford, and WICKED PREY is no exception. WICKED PREY is fantastic. It just might be one of my top three Lucas Davenport stories, coming in a close second or third behind BROKEN PREY and SECRET PREY. Don't miss this one; it's WICKED! Good reading, J.Stoner
Copyright © 2020 Thriftbooks.com Terms of Use | Privacy Policy | Do Not Sell My Personal Information | Accessibility Statement
ThriftBooks® and the ThriftBooks® logo are registered trademarks of Thrift Books Global, LLC