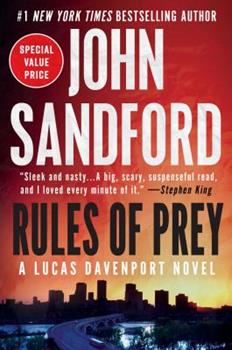 (Book #1 in the Lucas Davenport Series)

#1 New York Times bestselling author John Sandford's "haunting, unforgettable, ice-blooded thriller"* that introduced Lucas Davenport... The killer was mad but brilliant. He left notes with every woman he killed. Rules of murder: Never have a motive. Never follow a discernible pattern. Never carry a weapon after it has been used...So many rules to his sick, violent games of death. But Lucas Davenport, the cop who's out to get him, isn't playing by...

John Sandford is a master of his trade !

Published by Patrick Granahan , 3 years ago
Can’t go wrong with any of the”Prey” series......best of the best.

Published by Thriftbooks.com User , 18 years ago
John Sandford has written more than a dozen cop-thrillers featuring Lucas Davenport. "Rules Of Prey" was the first and I didn't get to it until I read a half-dozen or so of the later "Prey" titles. I've never been a fan of police procedurals and still am not. But I am definitely a fan of Lucas Davenport and John Sandford. Lucas Davenport is an experienced, tough and street-smart Minnesota cop. He begins working for the Minneapolis Police Department, but later switches over to a Minnesota state law enforcement agency. Davenport is no ordinary cop - but he's no super-hero either. Luck, good and bad, plays a part in Davenport's life. People do die while he tries to put the pieces together and figure out who the murderer is. Bad guys get hurt, good guys get hurt, even Davenport gets hurt. There is a wonderful grittiness to Sandford's "Prey" novels. They feel real. (Having lived in Minnesota probably helps because Sandford weaves in a lot of Minnesota color.) In this debut novel, Davenport tracks down a serial killer who has rules: never carry a weapon after it has been used and so on. The killer is smart and devious. But Davenport, without any happy miracles, tracks him down. Sandford's "Prey" novels are engrossing and Davenport is a magnificent creation. Jerry

Published by Thriftbooks.com User , 20 years ago
The Killer calls himself the Maddog. When the urge siezes him, he goes and "collects" a new victim. With each woman he slays, he leaves a note. These notes are the Maddog's "rules".Every note says something different, such as: Never kill anybody you know; never have a motive; never carry a weapon after it has been used. After two murders and a third attempt, Detective Lucas Davenport joins the case. Lucas isn't like other detectives. Rather its the dozens of women he attracts, the games he invents, or the Porsche he drives, Lucas is something you've never seen before. Lucas Davenpport is out to get this crazed man who hunts these women. Lucas has a strong sense of justice and is cleaver enough to find him. This killer, however, is unlike any he has ever encountered. Because he's not just a killer, he's a player. Lucas will have to have all his wits about him if he plans on apprehending him, alive or dead. If your looking for a suspensful, fun book, then I suggest John Sandford's masterpeice, Rules Of Prey.Rules Of Prey Is the first book in John Sandford's extraordinary Prey series

Published by Thriftbooks.com User , 21 years ago
A few years ago, I asked the owner of a bookstore to recommend some books for me. She said that she had been home sick for the past week and spent the time reading all of the "prey" books. At the time, I had no idea what she was talking about and thought they might have something to do with religion as in "pray" books. After some further discussion, I realized I had stumbled upon a great series by John Sandford. I started to buy the books then and it's taken me this long to finally read the first one. Since I read a lot of mysteries, many of which are part of a series, I'm pretty savvy when it comes to the most popular male protagonists out there at the moment. Now that I've been introduced to Lucas Davenport, my only regret is that I waited this long to begin my relationship with a now favorite character.The story is a good one and involves a serial killer whose identity is introduced to the reader at the beginning of the book. I like when an author does this as it enables me to get inside the killer's head and follow him around from place to place -- not only to the scene of his crimes but in his everyday life at work and home as well. I also love it when the moment arrives and I realize what the title of the book means. In Rules of Prey, the killer, referred to as "maddog", has certain rules that he follows so as not to get caught. For example, he never kills anyone he knows, he never uses the same weapon twice and he never has a motive. He always leaves a note at each crime scene communicating one of his rules. Not only does this serve as a challenge to our main character, Lucas Davenport, it is also the killer's "in your face" way of letting Lucas know that he is someone to be reckoned with.As a lead character, Lieutenant Davenport is a dream. He drives around in a Porsche, which was purchased with money he earns not only from gambling but also from a side job he has creating intense, strategic video games. He's smooth, good-looking and a real lady killer (no pun intended). I enjoyed the way he tracked down the clues, which will eventually lead to the killer. He also has no problem working around the "rules" set up by his own police department and I found this flagrant use or "misuse" of his own form of justice a bit ingratiating. But this particular case will prove not to be an easy chase as his sometimes-inept Minneapolis police department is foiled by the "maddog" on more than one occasion.I understand from other readers that these books just get better and better. That's a real incentive for any mystery reader and is an added bonus just knowing that I get to spend some more quality time with Lucas. This is certainly a series for the ladies as well as the guys. "Shadow Prey" here I come.

Published by Thriftbooks.com User , 21 years ago
My wife bugged me for months to read this series and when I finally broke down, I kicked myself for not starting it sooner. Sandford's books following Minneapolis Police Detective Lucas Davenport are some of the best I've discovered in a long time. I'm working my way through the series and loving it!Davenport is a maverick, brilliant, somewhat-womanizing detective.  I wasn't sure at first whether or not I'd like the character, but I quickly found myself a big fan of his. He's a cocky loner on the surface, but the digger you deep, the more sensitivity and warmth you find. Sandford has done a wonderful job of creating a character who is both intriguing and believable. (If you're hoping to create a mystery series, you'd better come up with a compelling protagonist and Sandford has certainly done that.)This book finds Davenport on the trail of a cunning serial killer who sticks to a carefully thought-out set of rules in an attempt to escape capture (hence the title of the book). The mystery really kept me on my toes, wondering how Lucas would manage to capture this deranged murdered.John Sandford's Prey series is recommended to fans of Michael Connelly, Robert B. Parker, and anyone who enjoys a good detective novel.

Published by Thriftbooks.com User , 24 years ago
This is the first of many John Sandford books I have read. The chapters ping-pong between detective Lucas Davenport and the killers mind. Sometimes you can't tell who's mind you're in! Very suspensefull and it really keeps you interested. I would recommend this book to people who like series books. The prey series in general is all suspensful and thought provoking.
Trustpilot
Copyright © 2022 Thriftbooks.com Terms of Use | Privacy Policy | Do Not Sell or Share My Personal Information | Accessibility Statement
ThriftBooks® and the ThriftBooks® logo are registered trademarks of Thrift Books Global, LLC