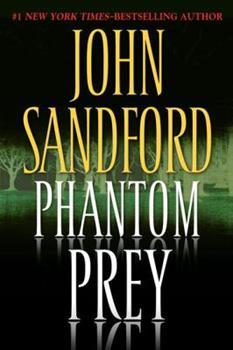 (Book #18 in the Lucas Davenport Series)

Lucas Davenport has had disturbing cases before, but never one quite like this, in the shocking new Prey novel from the #1 New York Times bestselling author. John Sandford's most recent Davenport novel, Invisible Prey, was hailed as 'one of his best books in recent memory' (The Washington Post); 'as fresh and entertaining as ever' (Chicago Sun-Times); and 'rivetingly readable' (Richmond Times-Dispatch). But this time, he's got something quite special...

Published by Thriftbooks.com User , 14 years ago
My wife is a big John Sandford fan. She loves his "Lucas Davenport" character. She actually collect's the Sandford novels. She really enjoyed this book in particular and said she would recommend it to her friends and family.

Published by Thriftbooks.com User , 14 years ago
I love John Sanford and he never fails to deliver with his books!! It is always a treat to get one of his books and I have a hard time putting them down once I do get one.

Published by Thriftbooks.com User , 14 years ago
Did all those other reviewers read the same book I did? Because I found the book classic Sandford--a good read from beginning to end. The story centers around a young woman, Frances, who is missing. It doesn't appear she walked out on her own, since a spray of her blood is found in her house. What happened to her? Lucas is called in some time after the disappearance and, very quickly, the single disappearance is tied into some messy murders of former Goth friends of the missing girl. Plenty of twists, as usual, and, as usual, this is compulsively readable from page one.

Published by Thriftbooks.com User , 14 years ago
Lucas Davenport is at it again. A page turner in the John Sanford tradition. The only disappointment was Sanford's uncharacteristic use of sexual situations to fill space. He should leave that for those with lesser creativity and weak writing talent.

Published by Thriftbooks.com User , 14 years ago
Back for his eighteenth appearance, Lucas Davenport of the Minnesota State Bureau of Criminal Apprehension (BCA) is not only on the job, but in top form. The main story concerns Alyssa Austin, recently widowed when the airplane carrying her millionaire pilot husband Hunter crashed in Canada, comes home to discover the alarm system of her tony suburban home turned off, but no one in the house. Knowing the housekeeper Helen is gone for the day, Alyssa calls out for her daughter Frances who might be visiting. Alyssa searches the house and finds what turns out to be a small blood stain on the wallpape. The blood belongs to Frances and the police find that more blood has been wiped from the floors. But there is no corpse. A sub-plot concerns Lucas Davenport and colleague Del staking out the apartment of the wife of dope dealer, who apparently is immodest of often peels off her top with the shades up. The cops are trying to nab her currently absent drug kingpin husband. Lucas Davenport is independently wealthy because he developed and sold a software company. He doesn't have to work, but he likes being a cop and solving the really tough cases, which just happens to be what the BCA does. In earlier stories, Sandford spent a lot of time developing Lucas Davenport. This time around, Davenport, married to surgeon Weather, with a young son and adopted teenage daughter is less introspective and more action oriented. And there is plenty of action. As it turns out, the distraught mother, Alyssa Austin, owns several exclusive fitness centers, knows Weather and asks her to get her husband involved in the case. Reluctantly, Lucas gets involved - just in time for a series of gruesome murders of young Twin Cities "Goths". Frances, the missing daughter, was into the Goth scene. Sandford is one of the best police procedural writers around today. He doesn't miss a beat in this one. Davenport is a cerebral cop who is constantly dogging a case, wondering how the leads and clues fit together. Almost as an aside, he tracks a money trail through the Goth community as one after another is murdered. Davenport himself comes in for a close call. It's a taut thriller, with Davenport displaying more than the occasional flash of brilliant inspiration that brings him one step closer to solving the crimes. The only unfortunate part of the plot is that Davenport relies upon a device he used to great effect in an earlier "Prey" novel, but it doesn't work so well here. Nope, I'm not going to spoil it for you. You'll know when you see it, even if you haven't read the prior Davenport novels. It's a small thing that doesn't take any pleasure from the reading because John Sanford is simply one of the finest authors of police procedurals in the business. The nice thing about the "Prey" series is that if you start with one, you might be drawn to reading the others. Start with the first and work your way through all of them. They really are excellent reading. Jerr
Trustpilot
Copyright © 2022 Thriftbooks.com Terms of Use | Privacy Policy | Do Not Sell or Share My Personal Information | Accessibility Statement
ThriftBooks® and the ThriftBooks® logo are registered trademarks of Thrift Books Global, LLC