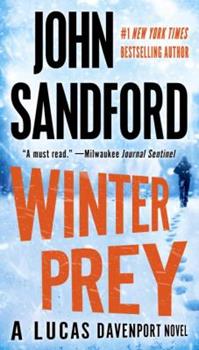 (Book #5 in the Lucas Davenport Series)

It's the dead of winter, and a killer like no other is turning a small Wisconsin town into a death trap-one that's closing in on Lucas Davenport.

Published by Tammy , 1 year ago
I loved this book and read it a long time ago. Was looking forward to reading it but the terrible smoke smell was too strong. I’ve put the book outside with baking soda hoping it will air out but so far no luck. Suggest that you don’t resell books with smoke smell.

Published by Thriftbooks.com User , 20 years ago
Winter Prey is the first book I have read by John Sandford. I wish I had found him before now. The book was great. I was in a trance the whole time, just living in my mind what he had written. Lucas Davenport was a great character. I cannot say enough good things about him or Shelly Carr, or the good lady Doctor and of course the Iceman. The book was well written, held my attention and was believeable. Parker or Connelly were my favorite authors until now. I would hate to choose between the three mystery writers. I hope his other books are as good.

Published by Thriftbooks.com User , 22 years ago
John Sandford's first 4 novels were certainly varied and assured enough to distinguish themselves as worthy entries in their genre. Yet, as interesting as the villians in those pieces were, the plots didn't have a lot of momentum to them, mostly because Sandford gave the reader too much information ahead of his lead character, Lucas Davenport. So, instead of keeping us on the edge of our seats, we basically waited for Davenport to discover what we already knew, diluting the immediacy and urgency of the plot. Luckily, with WINTER PREY, Sandford has changed his structure to the better, creating a nerve-frying tale of terror that ranks with the finest of the decade. The eerie snowbound locations lend plenty of isolated, creepy texture to the plot, while Sandford brilliantly elicits a disturbing, menacing atmosphere that puts us right into the story, giving us ingenious clues and surprise plot revelations to keep us glued to the pages all night long. Lucas Davenport emerges as a fully realized individual, while the supporting characters are first-rate, as are the action scenes and forensic details. A masterpiece.

Finally, I found out how Davenport met Weather!

Published by Thriftbooks.com User , 22 years ago
This thriller is as tight and spell-binding as Sandford's others in the Prey series. I read the books out of order and really enjoyed finding out how Davenport and Weather came together.

Don't open the cover if you have anything else to do today.

Published by Thriftbooks.com User , 24 years ago
The best of the "Prey" series. An absolutely riveting, attention grabbing thriller. Sandford comes up with one surprise after another, ending with one of the most unique and exciting chase scenes ever. Don't miss this one!
Copyright © 2020 Thriftbooks.com Terms of Use | Privacy Policy | Do Not Sell My Personal Information | Accessibility Statement
ThriftBooks® and the ThriftBooks® logo are registered trademarks of Thrift Books Global, LLC