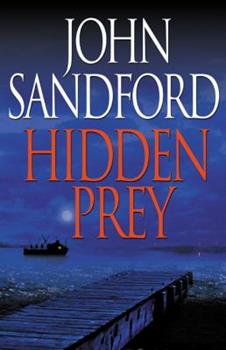 (Book #15 in the Lucas Davenport Series)

With Naked Prey , John Sandford proved again that his writing is as fresh and compulsively readable as ever. "This is vintage Sandford, which is to say all but impossible to put down," said The Washington Post . "Sprawling, suspenseful, tough-minded [and] sheer fun." Six months ago, Lucas Davenport tackled his first case as a statewide troubleshooter, and he thought that one was plenty strange enough. But that was before the Russian got killed. On...

--John Sandford does it again!

Published by Thriftbooks.com User , 16 years ago
HIDDEN PREY, brings back Detective Lucas Davenport, who's still smart and street wise, but now a little calmer and not quite so testy. His wife and young son seem to have turned Lucas into a happier man. He's still a detective, but he now works for the state government and reports directly to the Governor of Minnesota. When the murdered body of a Russian sailor is found on the docks of Duluth, Lucas is called in to supervise the investigation. Policewoman, Nadya Kalin is sent by the Russian government to assist Lucas. Nadya`s involvement complicates the investigation since Lucas doesn't trust her motives and believes that she's keeping information from him. This is a very fast paced story with a host of quirky characters, including a ring of Communist spies who have been living in Minnesota for decades. Their leader is a very determined former KGB colonel who happens to be 92-years old. I listened to the recorded book that was well read by Richard Ferrone. He has become the voice of Lucas Davenport! As an added bonus, on the last tape, there's an interesting interview with the author.

Published by Thriftbooks.com User , 17 years ago
Take a Ninety-Two-Year old hold out Russian Spy and his seventeen-year-old grandson and move them to Duluth. Now have them be violent as all get out, real killers. And you have the bad guys in John Sandford's "Hidden Prey" the latest in the "Prey" series.Though Lucas Davenport is happily married and very well off, that doesn't stop him from dropping everything when he's called to solve a murder and now he works for the State of Minnesota as sort of a roving crime solving guy. So when a well to do Russian is murdered on the shores of Lake Superior, Lucas is called into action and this time he's partnered with female Russian Investigator, who has her own secrets.It turns out that our aging spy is living in Duluth. He's a sleeper who has been long forgotten by both sides, until he feels he has to protect his secret by killing people who he thinks know too much. And then their is the grandson who is loyal to granddad, but even though he's been raised to be a killer, he's starting to get confused about the murders, and there plenty of them.Once again John Sandford has written a thriller that is impossible to put down. Lots of conflict, a great plot, wonderful characters, typical Sandford. I loved "Hidden Prey" and I think you will too.

Published by Thriftbooks.com User , 17 years ago
There is absolutely nothing wrong with the plot whether Lucas is married or not!! The russian police-woman doesn't make a difference! It is still a great book! Sandford still keeps me on the edge of my seat, like all his previous ones. I don't understand why all the negative feedbacks??

Red Guards at the Borders

Published by Thriftbooks.com User , 17 years ago
In the fifties these Minnesotans ran spies across the border into Canada where they could return safely to Mother Russia. Time and geopolitics bypassed the cell, but its members and their progeny sat waiting patiently for the call from Moscow. The new realities of the world brought someone back to Minnesota to reactivate the cell. Rather than stirring the Reds' loyalty for their ancestral motherland, the visit precipitates a series of murders that rocks the state.Lucas Davenport, now with the Bureau of Criminal Apprehension, and a lovely Russian counterintelligence agent try to unravel the mysterious deaths and the ancient spy ring, whose elderly ringleader nearly outwits them at every stage. Former foes unite to bring this strange chapter of history and the murders it precipitated to an end.This book lacks some of the bone-chilling terror of other books in the Davenport series. Do not let that deter you. The clever plot is incredibly satisfying.

Published by Thriftbooks.com User , 17 years ago
We're admittedly big Sandford fans, having enjoyed the entire preceeding set of "Prey" adventures (and his "Kidd" books as well) starring Lucas Davenport. Promoted to a position where he works on anything with political overtones at the behest of the Minnesota governor (no, not that one!), Lucas is soon embroiled with the murder of a Russian stranger down at the docks, and in escorting Nadya, an "investigator" (read, spy) sent over from Russia to look into the matter. Her presence adds both a great deal of suspense to the story, as we're never quite sure whether she's "legit" or not, as well as many funny lines as she puzzles over American colloquialisms.We readers soon know the shooter is young Carl, grandson of Grandpa Walther, a communist spy who has been running a ring of families engaged in Russian "assistance" in northern Minnesota for some six decades!! A clever analyst and fearless assassin in his own right, he's teaching teenager Carl the tricks of the trade, including heartless executions. So while there's no doubt whodunit, not to mention some more murders along the way, the clues and hunches Lucas pursues to uncover the spy ring and the killer keep the novel moving at a fun pace. A slightly moralistic twist at the end even gives one pause for thought about truth and justice.It's surprising Sandford can keep these characters and stories fresh after some 16 or so in this series. While Lucas has settled down with wife Weather, and young son and adopted daughter (who got barely more than a mention), he is still a smart and clever fellow and one whose success we care about. We thought the humor generated by the consternation of the Russian lady over various comical English sayings (like how does a foreigner translate something like "keep in under your hat"!) was a light-hearted touch, breaking up the contrasting horror of the various slayings and suicide populating the plot. Lastly, a sub-plot involving a "bag lady" who witnesses the first crime, was so interesting, we wish it had been expanded upon even further. So kudos to Sandford on his latest "Prey" -- it's a book very well done and thus enjoyable entertainment!
Copyright © 2020 Thriftbooks.com Terms of Use | Privacy Policy | Do Not Sell My Personal Information | Accessibility Statement
ThriftBooks® and the ThriftBooks® logo are registered trademarks of Thrift Books Global, LLC