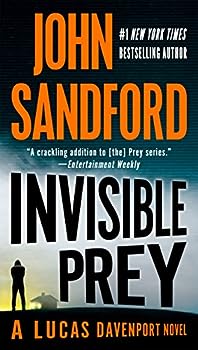 (Book #17 in the Lucas Davenport Series)

"A crackling addition to [the] Prey series" ( Entertainment Weekly ) from #1 New York Times bestselling author John Sandford. In a wealthy Minneapolis neighborhood, two elderly women are bludgeoned to... This description may be from another edition of this product.

Published by Thriftbooks.com User , 3 years ago
It has a varied cast of characters, keeps you wondering how dissimilar murders are connected, focusing on this person as the suspect only to have the rug pulled out from under you & turned to another of the person(s) involved. Not quite a "I couldn't put this book down until I finished it", but close.

This is a fine novel

Published by Thriftbooks.com User , 15 years ago
John Sandford does it again with Invisible Prey. Lucas Davenport, who is one of the most believable characters in modern crime fiction, continues his career in breaking a case that is deliciously complex, involves wonderfully convoluted and perverse characters and carries you from connection to connection until suddenly it will all make sense. This is a fine novel about interesting people, some of whom are doing violent and destructive things and others whom simply want to lead nice, decent lives and catches both the way in which the innocent can without cause be destroyed by evil, and the way in which good can in the end triumph. As an optimist, I find it always comforting to read John Sandford's novels and in particular I enjoy his Lucas Davenport pursuit of justice.

A WINNING STORY AND NARRATION

Published by Thriftbooks.com User , 15 years ago
Who can forget Richard Ferrone's compelling narrations of such titles as Broken Prey, Dead Watch, Rules of Prey? He's up to his winning tricks again as he reels in listeners with the opening lines of Invisible Prey. His voice is low, well modulated, and just a bit husky. Strategically placed pauses cause me to lean in, eager for his next words. Since giving up law for a theatrical career he has narrated more than 200 audiobooks, many in his "tough guy" voice, always assured, ever commanding. He's a topnotch voice performer who renders this novel's viscous killers and protagonist Lucas Davenport larger than life. It's a hot summer night, muggy with the threat of a storm, when two men known only as Big and Little gain entry to a Minneapolis mansion inhabited by two elderly women. They're savage in their assault, not only killing but further venting psychotic rage by beating a lifeless body. We hear: "In a second, in three long steps, he was on her again, beating the dead woman with the pipe, heavy impacts shaking the floor." It seems that this is one crime that may stump Lucas Davenport, but wait. Our relentless investigator has another case on his agenda - a high ranking politician with a penchant for pretty very young things has been accused of satisfying his debauched desires with a teenager. Surely one case has nothing to with the other. It's amazing to this listener how Sandford has continued to maintain his high standard with this his 17th Prey novel, yet he has produced another winner. Don't miss it! - Gail Cooke

One of the best Prey books ever!

Published by Thriftbooks.com User , 15 years ago
John Sandford's Lucas Davenport returns in INVISIBILE PREY and this series shows no sign of slowing down. Sandford is truly one of the best. The novel opens with "Big" and "Little" breaking into a mansion in one of the most exlusive neighborhoods in St. Paul. They brutally murder the inhabitants and the bodies are discovered a few days later. What did "Big" and "Little" want? The murders look like a random robbery at first, but Lucas is puzzled by what was taken, and what wasn't. The plot delves into the art world and antiques and a trail of murders that goes back many years. I've read all but three Prey novels, and the plot of this one stands out. The bad guys are crazy, but they're smart, and in it for the money. Lucas must decipher the art/antique world in order to find the clues that will implicate the killers. This novel isn't as tense as other Prey novels, but there are plenty of twists and turns and it is still a definite page turner. I recommend this series to any one who enjoys a well written cop thriller/procedural. This book really seemed to flow and was full of great characters and humor. (Warning: lot of bad language so don't read if that offends you.) Kidd, from Sandford's other series, also makes a cameo advising Lucas on art. That was fun to read. This is a great book, one of the best in the series. Read INVISIBLE PREY now and catch up later on the rest of the series. You won't regret it.

John Sanford at the top of his game

Published by Thriftbooks.com User , 15 years ago
This is Sanford's 17th novel featuring Lucas Davenport. All of them have been good reading by a master of the police procedural. A few have been slightly better than the others. "Invisible Prey" comes close to being the best of the lot. As always Lucas Davenport, a Special Agent for Minnesota's Bureau of Criminal Apprehension is called in when a situation is too tough for a local police department or too politically sensitive. "Promoting" Lucas to this job from his former job with a police department was a brilliant move by Sandford, as it lets Davenport roam the landscape without being bothered by jurisdiction. Clever guy, Mr. Sanford. The story opens with two women, an elderly heiress and her maid, being brutally bludgeoned on a dark and rainy night in a home in St. Paul's most element neighborhood. (Yes, Sanford really does set the scene on a dark and rainy night. Also, inexplicably, the dustjack puts the opening murders in Minneapolis, rather than St. Paul.) Lucas is dealing at the moment with a very politically sensitive investigation of a local politician who may have had just a bit too much to do with the minor daughter of his current paramour. But the old woman's murder, especially because of it's brutality, carries some poltical weight too, so Lucas looks in on the scene. The two disparate investigations - a sex scandal and a double murder - ultimately become involved. Sanford writes some of the best police procedurals to be found. His characters are solid and have depth. Lucas Davenport's wealth, acquired in an accidental second career as a software developer, is helpful in giving the character wider latitude in his social millieu and in setting him apart from his law enforcement officer peers. Sanford is very clever when it comes to character and plot development. A few books back, he introduced Weather, a surgeon, younger than Sandford who is now his wife and the mother of his young son. There is a standard cast of characters arond Lucas and most them are here. There's Marie, Davenport's hard driving, politically savvy boss; Flowers, the oddball investigator; Jenkins and Shrake, the two cops who often provide muscle when needed. In this novel, Sanford adds a young Afican-American boy who provides a couple of key clues. I suspect he will play a role in subsequent novels. He also adds Sandy, a young woman intern whose quirky character and investigative skills wouldn't be surprising to see in future books. Sanford identifies the killers early to the reader and then play very adroitly with the reader as Davenport attempts to discover who they are. Along the way, we get a few characters who might be involved and might not be. We also get to meeet a few people who aren't very pleasant. Sanford plays the mystery and the reader along beautifully. As the last hundred of pages or so rush by, Davenport starts closing in, though it isn't until close to the end that we're sure the killers will be found before Davenport him

Published by Thriftbooks.com User , 15 years ago
Minneapolis Police Detective Lucas Davenport leads a very sensitive investigation into the activities of Minnesota State Senator Burt Kline allegedly having sex with a minor. The consummate professional cop, Lucas is extremely careful with his handling of the official inquiry because he knows what a mess a media feeding frenzy would be with a politician-Lolita tryst. As he prepares to arrest Mr. Kline for sex with a fifteen year old, Lucas also is assigned the murders of wealthy widow Constance Bucher and her maid Sugar Rayette-Peeples in the former's mansion. Both were battered to death and the house ransacked. The first thought is a robbery turned ugly, as the affluent home is filled with valuable antiques. However, Lucas realizes that he has no idea whether anything was stolen so perhaps the murders were personal especially with the skulls smashed. As he continues his inquires, he soon finds a strange connection to the sleazy senator scenario, but identifying the killers still remains difficult and convoluted. Though number seventeen in this long running police procedural, INVISIBLE PREY is a fantastic tale in which the two cases are appealing because of the strong key players ranging from victims, suspects, witnesses, "vultures" and participants, etc. Readers will appreciate Lucas' investigations as John Sandford provides his hero with not the usual suspects in what will prove to be a one sitting thriller. Harriet Klausner
Trustpilot
Copyright © 2022 Thriftbooks.com Terms of Use | Privacy Policy | Do Not Sell or Share My Personal Information | Accessibility Statement
ThriftBooks® and the ThriftBooks® logo are registered trademarks of Thrift Books Global, LLC