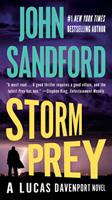 (Book #20 in the Lucas Davenport Series)

When a simple robbery turns deadly, the thieves close in on the only witness: Lucas Davenport's wife...

A good Lucas Davenport novel. If you are a Davenport fan, read it.

----AN INTENSE AND AND EXCITING THRILLER---

Published by Thriftbooks.com User , 11 years ago
In STORM PREY, John Sandford takes us too close to home for Detective Lucas Davenport. The story begins with an early morning drug robbery taking place at the Minnesota Medical Research Center where Davenport's wife, Dr. Weather Karkinnen is employed as a surgeon. Three men drive into a back entrance to the hospital. As they approach the parking lot, Weather Karkinnen is also driving in to work, and the two drivers are eye to eye for a brief second before she disappears around the building. The robbers approach a locked hospital door and it's quickly opened from the inside by another accomplice. The team tie up the pharmacy workers and as they are loading up the various drugs, they become aware that one of the workers had gotten untied and attempting to make a call on his cell phone. He's brutally kicked many times as the men make their escape. They know they've been seen by the lady in her car and will have to identify and find her! The Medical Center is at a very busy time. They are just about to start a tedious and dangerous surgery. Ellen and Sara are eighteen month old twin baby girls. They are conjoined at their heads. Dr. Weather Karkinnen is one of the several doctors who are participants in the surgery to separate the babies! When the investigation gets under way, Lucas Davenport and the various enforcement teams work quickly. Dr. Karkinnen is under constant guard since she had a brief look at one of the robbers. The five bad guys are an interesting group. Lyle and Joe are brothers who were attempting a non-violent crime. However, the others were, a druggie, a dumb brute and a psychotic killer. A little comic interest is added by Honey Bee Brown the girlfriend of Lyle, the gang's leader. John Sandford always delivers entertaining stories!

A Gripping Thriller from the First to Last Page!

Published by Thriftbooks.com User , 11 years ago
Storm Prey is my first exposure to bestselling author John Sandford, but it definitely will not be my last. This author is a master story teller who knows how to keep the reader interested as he weaves a tale of escalating violence while criminals become entangled in brambles of their own making. Modern day sociopathic Lebanese cocaine addicted Doctor Alain Barakat has lived a privileged life as a result of his wealthy father's generous stipend and tutelage by indentured fellow countryman Shaheen who helped him cheat his way through medical school to become a practicing doctor in Minnesota's Medical Research Center (MMRC). His ever increasing dependence keeps him broke, associating with criminal elements and leads to him being the inside mastermind behind the robbery of the hospital's pharmacy that results in the death of a pharmacy employee. Skilled MMRC surgeon Weather Karkinnen is a key player in a rare, complicated and much publicized operation to separate the heads of 18 month old conjoined twins Sara and Ellen Raynes. Unfortunately, Weather arrives in the hospital parking garage at the exact moment the cars full of robbers are leaving. Weather and one of the criminals briefly make eye contact--an event that makes her a loose end targeted for death. Her husband, Minnesota State Police Investigator Lucas Davenport, et al do all they can to prevent that from happening. Sandford keeps the reader riveted, ripping through the pages of this exciting 408-page thriller in record time showcasing an intriguing cast with exceptional character development and a spellbinding view into dark and unsavory minds and the webs they weave. If you are looking for an action packed suspense thriller that will keep you glued to the story, THIS IS IT!

Published by Thriftbooks.com User , 11 years ago
Anytime you review a book like this - another in a long series - it must be rated against all other mystery/thrillers and against all other Lucas Davenport books. On both counts STORM PREY comes up roses. Sandford has a unique ability to keep his characters fresh and developing so the series does not become dull or redudant. In this twentieth book of the line, Weather (Mrs. Davenport) is faced with the stressful separation surgery of conjoined twins. On the day the operation is to go, the hospital pharmacy is robbed and a worker murdered. Unbeknownst to her at the time, she has seen two of the participants and the chase is on. The surgery starts and stops over days and days as they try to keep both of the twins alive. This sug-saga adds terrific and unique tension to a murder thriller. Unlike what one might think if you've read prior books, Weather does not take the strong independent route. She is focused on the operation so she lets "the men do their stuff while she does hers". The rest of the plot is classic Sandford reverse mystery. We watch the bad guys as we watch Lucas, Virgil, Shrake, et al try to catch up with them. The criminals have to eliminate one of their members because he gave up DNA at the robbery. That leads to more eliminations as the nefarious goings on expand. The bad guys are constantly looking over their shoulders at each other while looking over their other shoulders watching the cops. The book tracks both the courses of the good guys and the bad - another level of depth and mystery that Sandford uses to keep the pages turning. As usual, all the characters all have depth. Even the robbers/murderers are given personalities. The dialogue among Lucas and his colleagues is believeable and at times witty. You want to be with them. The mystery constantly twists and turns bringing in new people and factors. It is Sandford at his usual excellence. If you have read Davenport novels before, this will not disappoint. I think it is as good as any other I have read. If you have not read any of this series before, do not dispair. This book easily stands alone. One caution for newbies. If you read this one, you will feel compelled to go back and read the other nineteen. Once you start, you will see a character(s) who developes, grows and continues to evolve. Sandford fans have been able to watch Davenport's life unfold from young cowboy womanizing tough with a hidden deep side to responsible husband and father still having the steel of the tough cop.

Published by Thriftbooks.com User , 11 years ago
I have enjoyed John Sanford's Prey series, which have become more accomplished and almost effortless in their flow in the most recent novels. This is the best so far and really very good indeed by all criteria of the mystery genre. The characterization is deftly sketched, with little in-depth probing, dialog or analysis, but the many players come alive. It has the laconic tone common to so many cop books, with a wry and unobtrusive throwaway wit. The most impressive aspect of the writing for me is just how much complex plot is presented without it feeling complicated; it has just the right words to move the story ahead at a comfortable pace, with no verbiage or the opposite extreme of elaboration. It's a clever plot, too, with the reader very much in the know and ahead of the investigators, but not quite; the surprises are convincing and nicely tantalizing. In many ways, it is a moral fable about how a simple act of brutality creates so many radiations of consequences as the dumb and nasty try to be too clever - and nastier. It's brutal, but is deftly offset and balanced by the splicing of the subplot of the hero's surgeon wife's involvement in a long and high risk operation plus the inclusion of Sanford's most appealing new character, Virgil Flowers, who is at the center of three previous - and very good - novels. It's warm in its mood of friendships and collegiality. I don't want to overpraise this book. It is deliberatively focused on a crime and the dangers and manipulations that it creates; it does not go beyond its plot. The sociopaths and their motives are well presented within the narrative aim, but just that. It's a well-made story, well told and, again, just that. It's not "deep" but it is a very satisfying read and I recommend it strongly. I would be very surprised if any lover of the work of, say, Lee Child or Harlan Coben doesn't enjoy it as much as I did. It might not appeal so much to readers who want the depth of social and pyschological ambience of Stieg Larrson or Henning Mankell. Either way, it's a first-rate work.

Published by Thriftbooks.com User , 11 years ago
This is the 20th of John Sandford's "Prey" novels, featuring Minnesota cop Lucas Davenport and his band of merry, lethal, smart men. Perhaps it's fitting then, that this book is a marathon rather than a sprint... a down-to-earth, detailed police procedural rather than the edge-of-your-seat tension that you sometimes get with the Sandford books. But that's part of the draw of this series... it's not just the same book over and over. I can actually remember the plots from these books, and how the characters have matured and changed. That's a good thing. For me, the most appealing thing about the Prey series -- heck, all of the Sandford books -- is that the protagonists are smart and they catch the bad guys because the bad guys are dumb. No criminal master-minds here. Sure, things get pretty violent sometimes, but Davenport and his crew generally manage to avoid a lot of brawn by using brain. For me, the best line of the book was when Virgil Flowers tells Davenport that it's good Davenport's state squad is barging in on a Minneapolis investigation. "The point remains," Virgil said. "Never hurts to have a little more IQ on the job." Sometimes, it seems like the world wants to completely ignore the tremendous truth there is in that statement. Sandford's dialogue is nitty and gritty and rings absolutely true, and his prose enfolds it so seamlessly that it's entirely possible to sit down with one of his books and find that you've finished it four hours later, without really knowing just how that happened. After those four hours, I finished this book feeling better about the world, and that's not something you can say about most novels, either. It feels good to remember that men and women like the ones in this book do exist -- courageous, dutiful, scatalogical, funny, determined and smart. Can't wait for the next one!
Copyright © 2020 Thriftbooks.com Terms of Use | Privacy Policy | Do Not Sell My Personal Information | Accessibility Statement
ThriftBooks® and the ThriftBooks® logo are registered trademarks of Thrift Books Global, LLC