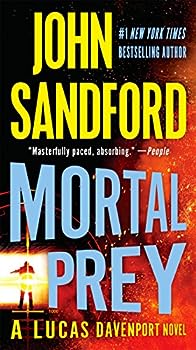 (Book #13 in the Lucas Davenport Series)

Years ago, Lucas Davenport almost died at the hands of Clara Rinker, a pleasant, soft-spoken, low-key Southerner, and the best hitwoman in the business. Now retired and living in Mexico, she nearly... This description may be from another edition of this product.

Everything you want (and don't want) to know about I-75

Published by Thriftbooks.com User , 18 years ago
I thought Dave Hunter was nuts when he announced all those years ago he was going to do a book about the Eastern United States' busiest north-south artery: Interstate 75. But he was really onto something. This book gets better year after year, and justifiably more popular as well.Even if you're a paid up member of AAA, like me (or any auto club for that matter), this book will be a great supplement to the strip maps, wall maps and hotel guides you usually take along with you. In almost painstaking detail, milepost by milepost, Hunter tells you everything you wanted to know about I-75 and some things you'll probably wish you didn't (although you'll learn something there too).He tells you exactly where to find the radar traps, what you'll find at every exit between Detroit and the Georgia/Florida line, and this year's constructions zones. And he offers some sage advice on what to do in case you hear a tornado warning on your car radio (listing all the counties that run along and parallel the I-75 route).For places to stay along the way, he offers suggestions on his favorites; as well as how to save money at any hotel by playing by the hotel industry's own rules. He posits a great tip on how the carpool lanes really work (a potential timesaver in Atlanta). He even suggests advice on what bypasses to take around major cities, parallel routes in rural areas if you want to get off the beaten path, and why one should never stay overnight in a city unless absolutely necessary.On a personal note, Hunter is a really classy guy. I've never met him in person, but I would like to now, especially after I noticed what I thought was a glaring ommission in the book: a potential shortcut between two cities along the I-75 route. I e-mailed him, and he promised to investigate it on his next trip. A month later, he wrote back saying that he tried that shortcut himself and while it faster it's not worth it because of all the turns one must make to get to it.A remarkable achievement for a guy who self-publishes this book. If you follow just one of the money-saving tips he offers, the book will pay for itself and you'll want to keep getting each new edition, year after year.

Published by Thriftbooks.com User , 18 years ago
This wonderful books is designed for "snow birds" (those seasonal migrant masses that know, genetically, winter is coming and they must drive south to Florida). Interstate 75 is one of the most interesting highways in America. It is full of side trips that can last an hour or a day. What Hunter has done is make miles of tedious asphalt fun and entertaining. Do you know where to stop and buy `Chocolate-covered potato chips'? Or, do you know where the `Gone with the Wind' museum exit is? Hunter does!The book is well laid out and very easy to use. I applaud the way that Hunter uses two sets of maps in the book. The I-75 section in the front of the book runs North to South, or Detroit to the border of Florida. The map pages in the back of the book run South to North. In the center of the book is the travel information, insider tips, special reports, etc. that make the trip enjoyable.An area of improvement would be a symbol on the maps delineating where significant interstate highway construction is happening Rand McNally Road Atlas 2004 has a great symbol system showing where construction is going on.Also, someone needs to tell me why this guide and the I-75 guide written by Christine Marks (see my review) both stop at the Florida border! A mystery to me as I-75 does go all-the-way to Miami!This is the best of the I-75 guides out to-date. You will find tons of useful information you will not find in other guides. If I-75 is your route South (or North) you will appreciate this gem. Get it! 4.5 stars

The best in a long line of Prey

Published by Thriftbooks.com User , 20 years ago
At the end of "Certain Prey" three years ago, Clara Rinker took a shot at Lucas Davenport, missed and called him on the phone to chat about it. You knew then there'd be a sequel, and it's as good as the first - even better."Mortal Prey" begins in Cancun when sniper Izzy Cohen fires at Clara killing her lover Paulo Mejia and their unborn child, wounding her. Determined to settle the score, Clara takes off before Paulo's powerful family finds out she was the real target and the St. Louis mob realizes she's still alive. Her hit list includes four "businessmen" led by Nanny Dichter, pioneer of the St. Louis cocaine business, and John Ross who got Clara started as a contract killer and is still one nasty guy. The first hit comes quickly with a lot of little arrows that will point to Clara when the cops, the Feds and Ross start following them, but she'll always be a step or two ahead.The FBI is holding her younger brother Gene on a trumped up drug charge, so Clara calls Lucas to lay down the ground rules. The lively if unrealistic banter between maverick lawman and outlaw sets the tone for the chase to come. Ten pages later Sandford repeats the conversation as Davenport heard it, capturing the gut level connection between them while their two minds work at warp speed toward opposite ends.There's a steady flow of great action with Lucas and his unofficial partner ex-cop Mickey Andreno working the streets and Agents Mallard, Malone and the rest of the FBI providing high tech back up and firepower. Through page 350 the story follows a somewhat structured outline, moving from one showdown to the next. Then Sandford gives us three quick closing chapters. He provides a sufficient degree of closure to this saga but leaves enough loose ends and surviving old and new characters that I would bet on, hope for, future St. Louis based / Rinker related Prey stories. One thought for Sandford's next effort: Certain Easy Rules of the Mind in the Eyes of a Secret Chosen Mortal turn Silent in the Sudden Shadow of the Winter Night.Translated: The Prey series has been great, but don't let the 90s Lucas wear us down. Keep the stories coming, but trade in the Porsche.

One of the best in the "Prey" series.

Published by Thriftbooks.com User , 20 years ago
Most of John Sandford's "Prey" series work by identifying the killer early and then following the story on both the lines of Lucas Davenport and of the killer, as they plot and counterplot against one another. Sandford returns to the formula here, and it works well because Lucas's antagonist is Clara Rinker, the professional hitwoman from his earlier books. Sandford is careful not to make her a two-dimensional sociopath -- indeed, she is so well rounded that at times the reader can forget that many of the people she has killed in her career were completely innocent. For most of the book, this is not true as Rinker goes after the crime bosses for whom she has worked in the past. The book begins with Rinker almost getting killed, and her decision that the people she worked for (all mob connected) are behind it sets her off to eliminating them, none of whom is too sympathetic. It is a mistake to root for Rinker because a few innocent people are unfortunate enough to wander in to her way, and the result is not good for them. Rinker is smart, and her killing of well protected hoods who know she is coming for them is for the most part plausible. Only one of the killings, involving a device that has been used in a well known real-life assasination, seems unlikely to have been successful. All in all, she is such a strong character that this book seems to be more hers than Davenport's.Davenport is one of the few people to have seen Rinker and lived, and so the FBI brings him to St. Louis to help catch her. All but a few chapters take place outside of the Minneapolis-St. Paul area, most of the familiar characters in the Davenport series aren't present, but Rinker more than makes up for them. Read closely, some of the deductions that Davenport comes up with are a little contrived -- all he does is show up from out of town, talk to a few local cops, and he is ahead of the FBI. However, the dialog is as well written as ever, and the dry humor still there. And there are a couple of nice twists in the plot at the end. I found the last two books in the "Prey" series to be weak; I thought that Sandford may have run out of ideas of what to do with Davenport, and have read some interviews in which he expressed frustration with the series. Mortal Prey is a return to the stong, earlier novels. There is life in Davenport yet.

Published by Thriftbooks.com User , 20 years ago
M ost satisfying book, yet again, by John Sandford.O ld enemy is reintroduced in the form of Clara Rinker.R inker narrowly escapes an attempt on her lifeT he FBI wants to find her and recruits Lucas Davenport.A ll the while, Rinker's plans for revenge gather pace.L ucas jumps at the chance to lock horns with an old foe.P urposeful and ruthless, Rinker is a formidable enemyR equiring Lucas to be at his most resourceful best.E xtremely enjoyable story that focuses on the thrill of the huntY et offsets it with Lucas' upcoming wedding plans.
Trustpilot
Copyright © 2022 Thriftbooks.com Terms of Use | Privacy Policy | Do Not Sell or Share My Personal Information | Accessibility Statement
ThriftBooks® and the ThriftBooks® logo are registered trademarks of Thrift Books Global, LLC