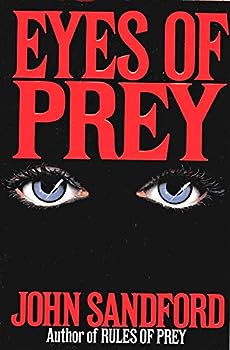 (Book #3 in the Lucas Davenport Series)

This novel is the third in the 'Prey' series and catches up with Davenport as he is chasing a killer that has a nasty habit of taking the eyes from his victims.

Got a good copy, filled with ink and boxes

Published by Evie , 2 years ago
Filled with boxed and underline sentences, and the corner of the cover is mashed up. I'm excited to read it but I'm irritated at the quality.

Published by Thriftbooks.com User , 19 years ago
I have no idea how I missed this Sandford fiction in his "Prey" series, but I did. It's definitely one of the first with Lucas Davenport. It's an absolute jewel right down to the last sentence. I actually enjoyed it more than the newer "Prey" books. John Sanford poured so much detail in to his characters. The killers (notice the plural) in this novel keep Davenport reeling with questions to the end, which is also a terrific surprise.If you're a new reader of John Sandford, go back and start with this book before reading the newer "Prey" books. It will help you to understand Lucas Davenport better as well as his police pals.

Published by Thriftbooks.com User , 21 years ago
This is an early "Prey" novel when Lucas Davenport was working as a detective with the Minneapolis Police Dep't. He is troubled by a failing relationship while attempting to solve the murder of a physician's wife. He suspects the doctor is involved despite an ironclad alibi, and clues from a possible witness who may have been with the victim prior to her brutal death which included the removal of her eyes.Sandford shows his ability to take the reader into the depths of madness and to surprise the reader with his deftness to tie together all the loose ends. It is such a pleasure to read a book that you are fully satisfied with and still be surprised at where the author takes you with the ending. This book is highly recommended, both for newer readers and for those who've read the earlier "Prey" novels years ago but may have forgotten how good they really are.

Published by Thriftbooks.com User , 21 years ago
Lucas Davenport,Sandford's unforgettable cop hero (think Dirty Harry with more intelligence) match wits with two psychopaths:one is a disfigured actor and another is handsome but twisted doctor and manipulator who has a obession with all matters of death and murder.Dr. Michael Bekker is one most sinister villians that has ever been created and this novel has nonstop action and chills!

Sandford is great. He keeps you on the edge of your seat.

Published by Thriftbooks.com User , 21 years ago
Eyes of Prey is the first John Sanford book I have read. Now I can't resist reading his work. Sanford is a sound writer and he does a good job of showing details. In addition to being very interesting, this book is easy to read and is even easier to get into. Lucas Davenport is an awesome character. He is everything a hero could want to be. He is slick, sneaky, and gets the job done. Michael Bekker is a very fitting person for the job of a serial killer. Until the end of the book I thought he might even get away with the killings. Druze fits in almost as well as Bekker in that his facial features allow him to kill someone without being bothered. Bekker's beauty and Druze's childhood make them excessively dangerous and are definately two people that I would not want to meet up with. Druze and Bekker are a dynamic team and if it were not for Bekker's stupidity, they may have actually gotten away with the murders. Great book Mr. Sandford! I hope you can continue your success!
Copyright © 2020 Thriftbooks.com Terms of Use | Privacy Policy | Do Not Sell My Personal Information | Accessibility Statement
ThriftBooks® and the ThriftBooks® logo are registered trademarks of Thrift Books Global, LLC