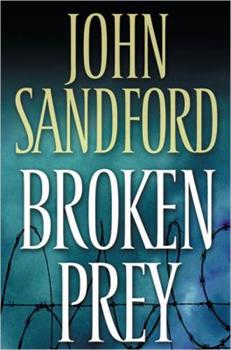 (Book #16 in the Lucas Davenport Series)

Lucas Davenport confronts a living nightmare, in one of the scariest Prey novels yet from the number-one bestselling author. The "Big Three" are a trio of inmates locked up in the Minnesota Security Hospital over the years, each a particularly vicious serial killer, each with his own distinct style and propensities. Everybody feels much safer knowing that they're behind bars. Except . . . there's a new killer on the loose. And his handiwork bears...

The mind of a killer

Published by Thriftbooks.com User , 17 years ago
The mind of a serial killer has always been an object of interest to readers and writers alike. Lucas is confounded by a killer so diabolical and cruel that only a madman could commit the crimes. The problem is that the murders bear the tradecraft of several deranged killers, most of whom are held under tight security in Minnesota's state mental hospital. John Sandford wraps mysteries inside conundrums seamlessly. In this work, Lucas Davenport is rarely more than one step behind the killer, but what a step it is. Finally the police work and luck combine to an explosive and satisfying conclusion.

Published by Thriftbooks.com User , 17 years ago
BROKEN PREY opens with pervert (and possible murderer) Charlie Pope smelling rancid and miserably scratching out an existence as a garbageman, the only job that he could get since being released on parole from St. John's Security Hospital. Every time Charlie sees a good-looking woman he is reminded of the fact that he is tethered to an electronic ankle bracelet and constantly branded in the press as a danger to the community; after over eight years of incarceration Charlie is desperate enough to fulfill his physical desires by whatever manner necessary. The narrative then switches to an upscale Minnesota suburb as Lucas Davenport arrives at a truly horrific murder scene in the Porsche so familiar to the legions of fans of the PREY series by John Sandford. Even to law enforcement professionals involved, the details of the gruesome crime are almost stomach turning. (In fact, it threatens to be the crime which finally causes Lucas' long time associate Sloan to totally burn out and retire from the police force.) The victim is a young woman; her body was systematically scourged, after her throat cut the body was arranged by the killer so that the display would have maximum impact. The details of the killing are not released to the press, both so as to avoid alarming the public and to aid the police in their investigation. When a second victim (a older male who was killed and displayed in the same manner ) is discovered several miles away three weeks later, it is clear that there is not only a serial killer but a true sociopath at large in southern Minnesota. All the evidence that Lucas and his team assemble points to Charlie Pope, who has cut off his ankle bracelet and disappeared. And yet confusion and doubt linger. The crimes have been so meticulously plotted and carefully executed that Lucas wonders whether Charlie, a man of limited intellgence and supposedly subject to emotional impulse, could really have committed such acts on his own or is simply being manipulated in some manner by a clever mastermind. (Perhaps Charlie has somehow remained in contact with the "Gods Down The Hall", the three most dangerous prisoners at St. John's; they are all kept in solitary confinement due to the extreme danger which they pose to anyone with whom they come into contact). This is John Sandford at his best - Lucas and his team (Del Capslock even makes a cameo appearance) trying to track down a deranged killer in a race against time. Small missteps result in further murders and the case threatens to become so explosive that it might demand political sacrifices before its conclusion. Lucas is still working as a freelancer for Rose Marie Rioux, the head of the BCA (Bureau of Criminal Apprehension), but her role in this book is largely peripheral to the story. Lucas' childhood friend Elle (Sister Mary Joseph) plays a larger role than usual. Meanwhile Lucas is at loose ends while his wife Weather and his family spend the summe rin London while Weather at a ho

Davenport does it again !

Published by Thriftbooks.com User , 17 years ago
In this thriller,Davenport & comp. are hunting an especially vicious prey-a serial killer of monstrous brutality-and a sick but perfectly smart mind. As soon as you jump on their wagon,you will be taken for a ride you'll not soon forget-literally scratching the pages as you hope and pray with the team that they shall be in time,save the victim,get the killer.... If there were 10 points for suspense,this would be the book.

Published by Thriftbooks.com User , 17 years ago
I read this story at one sitting. This Mystery is one of the best of a consistently high quality series by Mr. Sandford. The tension begins at page 1 and does not let up. There are numerous red herrings tossed in front of the reader, obfuscating who the real bad guy(s) might be. Lucas Davenport's search for the Top 100 Rock and Roll songs to put on his new IPod adds a new type of personal connection to the book, not to mention taking the place of the secondary crime story line Sandford usually employs to ease the tension of the primary case (remember the mysterious death where the woman was frozen to death many stories ago?) But for the first time in many books Sandford holds off on revealing the bad guy until late in the book. He has put out many where the bad guy is identified by the half way point, and the tension is based on the chase of a known villain. In Broken Prey the reveal is is held off until much later, and with great result. My only regret is that I will not be able to read it again for the first time. This is a great story!!!
Trustpilot
Copyright © 2022 Thriftbooks.com Terms of Use | Privacy Policy | Do Not Sell or Share My Personal Information | Accessibility Statement
ThriftBooks® and the ThriftBooks® logo are registered trademarks of Thrift Books Global, LLC