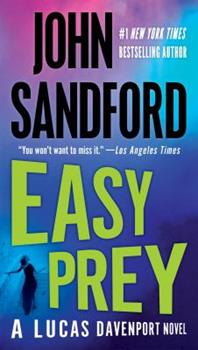 (Book #11 in the Lucas Davenport Series)

Lucas Davenport investigates an unsettling series of murders in this classic novel in the #1 New York Times bestselling series--and this one is John Sandford "at the top of his game" ( New York Post )... In life she was a high-profile model. In death she is the focus of a media firestorm that's demanding action from Lucas Davenport. One of his own men is a suspect in her murder. But when a series of bizarre, seemingly unrelated slayings rock the city,...

It just gets better and better!

Published by Thriftbooks.com User , 22 years ago
I have read ALL of John Sanford's books! Easy Prey is one of the best. When John Sanford writes, you get such a clear picture of the characters, especially "Lucas Davenport", that you feel as if you know them personally. The plot was captivating; I usually read his books within 48 hours. This one took me 12! I could not put it down. I agree with one other reviewer. The only problem I have is that Mr. Sanford DOES NOT WRITE QUICKLY ENOUGH! I would like to see more Lucas Davenport novels soon, very soon! I think I am in love!

Published by Thriftbooks.com User , 22 years ago
What I hate most about reading John Sandford's Prey books are the ending! It takes forever for a new one. Can he write faster? I think this series just gets better each time. Is it too early to wonder when the next "chapter" of Lucas' life will be written.

Published by Thriftbooks.com User , 22 years ago
I was surprised to find I enjoyed this latest installment in the "Prey" series even more enjoyable than "Certain Prey." Sandford has a rare gift for writing about murderers and deviants and still keeping a sense of humor in forefront. The only drawback to this book (and not the author's fault which is why I still rated it 5 stars) is that the proofreader needs to have his/her head whacked. Glaring errors in the proofing can be very distracting.As for getting Davenport to settle down and commit to one woman, I hope he never does! Or at least, not with Weather Karkinnon, she's the dullest of all Sandford's fine creations and I have yet to figure out what Davenport sees in her. I like the predicament Lucas is left in at this book's end, a kind of 'lady or the tiger' deal. I always enjoy those few and far between books that keep my imagination going even when the book is finished.

Keep getting better and better

Published by Thriftbooks.com User , 22 years ago
Okay, I read alot of seriel killer books lately from Thomas Harris to James Patterson and of course Mr. John Sandfrod. I have noticed that with Jonh Sandford his Prey novels just keep getting better and better. I didn't think his books could get better then Certian Prey. That books was just fantastic. But this book is just as good. A fantastic read. Mr. Sanford is defiantely a wonderful writer.

As good as it gets

Published by Thriftbooks.com User , 22 years ago
Successful Supermodel Alie'e Maison never had a normal childhood since her avaricious parents parleyed her beautiful looks into making them a fortune. She is now one of the richest models in the country and now Alie'e only works those fashion jobs she wants as she seeks pleasure and excitement in her life. At a Minneapolis party hosted by Sally Hanson, Alie'e enjoys the drugs and sex that flow so freely.That ends when (...). Minneapolis Deputy of Police Lucas Davenport heads the investigation that has media and political attention due to Alie'e being the victim. For a cop this case becomes a living nightmare due to the media's sensationalizing what happened at the party. However, the case turns uglier when (,,,). Lucas has numerous suspects, but the investigation twists again when one of his own crew is almost killed by the clever perpetrator.The Davenport books are all hard hitting, hard-boiled, and hard edged police procedurals that turn up the adrenaline pump to extraordinary levels for the reader. EASY PREY starts off in the stratosphere and never comes down even at its climax. The charcaters are fully developed and the subplots that tie back to the fast-paced story line bring them to life even as it adds fuel to the speed of the novel. Lucas remains a complex but enigmatic protagonist and fans of the sub-genre will enjoy his exploits tremendously. John Sandford is worth the price of hard cover as he proves that reading is still a pleasant experience even with the coming of Play Station 2.Harriet Klausner
Trustpilot
Copyright © 2022 Thriftbooks.com Terms of Use | Privacy Policy | Do Not Sell or Share My Personal Information | Accessibility Statement
ThriftBooks® and the ThriftBooks® logo are registered trademarks of Thrift Books Global, LLC