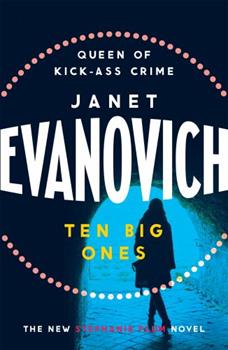 (Book #10 in the Stephanie Plum Series)

Janet Evanovich is the hottest author in America, and her Stephanie Plum novels have taken the nation by storm #1 New York Times #1 Wall Street Journal #1 Los Angeles Times #1 Entertainment Weekly #1... This description may be from another edition of this product.

Published by Thriftbooks.com User , 18 years ago
At repeated urging from several friends, I finally bought the paperback edition of ONE FOR THE MONEY. Finished it in one evening...couldn't put it down!! A couple days later, I located TWO and THREE, and sat up two nights in a row until 4am reading them. Last Friday, I bought FOUR, FIVE, SIX, SEVEN, EIGHT and NINE, closeted myself at home for the weekend and read FOUR through SEVEN, finishing at 2am this morning. I am totally addicted to Stephanie Plum's adventures!! Can't wait to get home from work tonight to start on EIGHT. When I finally get to sleep, all bleery-eyed from eye strain in reading, my dreams are filled with visions of Joe Morelli and Ranger. Janet Evanovich is great in weaving these adventures...and teasing us with Stephanie's love interests!! Can't wait for her next novel!! Oh, and P.S. I am a senior citizen!!

Published by Thriftbooks.com User , 18 years ago
I was worried as a lot of authors have problems maintaining a series, especially one this long and I was worried that the major angles of the relationships had already been covered. Boy was I wrong! For pure reading enjoyment this is excellent! Laughter and tears, a pure sense of enjoyment swept me away. I highly recommend this! Just thinking about it, still makes me chuckle...

Published by Thriftbooks.com User , 18 years ago
Stephanie Plum is the world's worst bounty hunter, but her escapades will have you laughing out loud! She and her pal Lula are not exactly Starsky and Hutch, but they'll either get their man -- or get themselves over their heads in trouble. Sometimes both. This time around, the ditzy dynamic duo go after a Cheez-Doodles-tinged PMS sufferer who held up a Fritoes truck after going crazy from the no-carb diet; a Red Devil bandit; and a Square Bob Sponge Pants lookalike. After losing yet another car, Stephanie drives the Buick bomber through gang territory not realizing she was showing the rival gang's colors -- and she's now a marked woman, pursued by the notorious Junkman, a hired killer from LA. Not even Ranger or Morelli can save her this time, but a new hero rides to the rescue. There's trouble on the home front, too: Stephanie's sister Valerie is getting married and none other than Sally Sweet is the official wedding planner. Who else but a cross dresser would know the best colors -- eggplant and pumpkin --for the bridesmaid's gowns? And Granny notices Stephanie's weight gain -- is she pregnant? In a "New Joisey" universe where only Rex the Hamster shows any signs of normalcy, Evanovich's colorful characters romp through another madcap mystery -- their 10th, no less! -- that'll make your sides hurt from laughing. I can hardly wait until the 11th book comes out!

Published by Thriftbooks.com User , 18 years ago
I like this book. I like it a lot. Stephanie still has her moments of madcap zaniness, but Evanovich seems to have decided to clean up her protagonist's act. Stephanie, it is still made clear, is not the best bounty hunter around (that would be Ranger), but she isn't the worst either. She actually seems like she knows what she's doing. She witnesses a crime, takes appropriate action and can accurately describe the get away vehicle and perpetrator to the cops. She knows how to handle herself in a tight spot. She's no longer a joke, and personally, I like her a lot better this way. The relationships still vacillate between Ranger and Morelli, and I suppose the author will milk this for as long as she can, but the series is taking a new, and far more entertaining direction.
Trustpilot
Copyright © 2022 Thriftbooks.com Terms of Use | Privacy Policy | Do Not Sell or Share My Personal Information | Accessibility Statement
ThriftBooks® and the ThriftBooks® logo are registered trademarks of Thrift Books Global, LLC