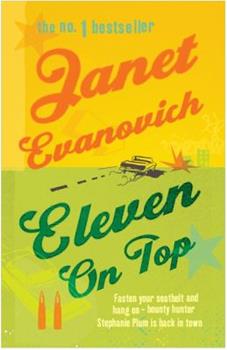 (Book #11 in the Stephanie Plum Series)

This description may be from another edition of this product. #1 New York Times #1 Wall Street Journal #1 Los Angeles Times #1 Entertainment Weekly #1 Publishers Weekly Stephanie Plum is thinking her career as a fugitive apprehension agent has run its course....

Abridged books should be sold as abridged.

Published by Hilary Delchamps Sweezey , 1 year ago
I really like this series and am filling in gaps. That said, this is not the first time I have received abridged books when I thought I was buying full length books. It will, however be the last.

Published by Emily H. , 1 year ago
Upon receiving this book in the mail, I was shocked. I placed an order for a like new book and the book I got has chew marks on it. Not only has it been chewed on but it has mold and water damage. I’m severely disappointed.

Published by Thriftbooks.com User , 16 years ago
It's a good day when the latest Stephanie Plum novel shows up... Eleven On Top by Janet Evanovich. This may be one of my favorites of the series... Stephanie Plum has decided to quit the bounty hunting business. Her life isn't going anywhere, and she's decided to get a steady job with a regular paycheck. Of course, not having anyone shoot at her or blow up her car would be nice too. But of course, nothing is normal or steady when it comes to Ms. Plum's life. She gets fired on day one from the button factory. She gets fired from the dry cleaning job after a couple of days (and when the matriarch of the owner's family dies when Plum's car blows up). And her job in the fast food business ends after a day when the chicken restaurant she works at burns down after a couple of days. So why all the pyrotechnics? Someone's apparently out to settle an old score, and Stephanie's life seems to be in peril. Threatening notes, exploding car bombs, exploding garages, burning restaurants, and she's not even in the business any more. Add into the mix that she's now working for Ranger at the same time she's trying to nurse Morelli back to health from a broken leg... As I said above, this may be one of my favorites in the Stephanie Plum series. I enjoyed the interaction between her and Lula as Lula tries to take over her old job (and still get Stephanie to help with all the apprehensions). There's a bit more Ranger time as you learn more about his business, as well as wondering whether Stephanie will succumb to her urges to jump his bones. And her gramma is as zany as ever. Even though you think you know how the story is shaping up, there are still plenty of twists that accelerate at the end, making sure that I stayed up later than I wanted to find out how it all ended. A good, fun read, and another excellent installment in the series...

Evanovich at her best - with lots of the scrumptious Ranger!

Published by Thriftbooks.com User , 16 years ago
It's not often that I read a book and feel completely satisfied when I reach the last page. This was one of those rare treats, not only full of giggles and guffaws, but the breathless joy of seeing things develop a step further between Ranger and Stephanie. Great moments include Ranger's line, "I wish this was as bad as it looks," him saying "You're a fun date" (I won't say what Stephanie did to earn that accolade), and seeing Tank torn between trying to decide who is more dangerous -- Ranger or Stephanie. LOL. Really, the more you see that pair together, the better matched they appear! The ending is equally clever - siumultaneously satisfying and leaving you dying to see what will happen next in the Ranger/Stephanie relationship. I can hardly wait for the next in the series!

Always good for lots of laughs!!

Published by Thriftbooks.com User , 16 years ago
If you don't like slapstick type of humor, these books are not for you! The first of these books I read, "Seven Up", I wasn't sure I liked but then I read "Hard Eight" and "To the Nines" and soon I got the humor and they kept me laughing. This Stephanie Plum story starts with Stephanie having quit her job as a bondsman 30 seconds before the opening of the story. Lula and Connie in her office are shocked and Vinnie, her cousin and boss, is outraged. Stephanie has decided she is tired of her cars being blown up, members of her family being hurt or in danger, and being in danger herself physically. She has heard there are job openings at the button factory in town and decides to apply there. She is hired as a receptionist to replace the one that just left and is suing for sexual harassment. Stephanie "celebrates" her new job with on-again-off-again boyfriend, Joseph Morelli, and is 90 minutes late for her first day on the job! She refuses to do any sexual favors for the boss to make up for her lateness and is fired. In the meantime, she is receiving threatening notes from an unknown stalker in her apartment and in her car. Her car is set on fire, she is shot at, her grandmother and Morelli's grandmother get into a fight at a funeral home and so on!! Lots of menace and mayhem ensue, Stephanie works hard with Ranger's and Morelli's help to investigate and find her stalker and who it is turns out a big surprise. Romance, sexual tension, suspense and lots of laughs make a fun read!

Romance+Humor!!! This one's even got a great mystery!

Published by Thriftbooks.com User , 16 years ago
Of course, I had to read "Eleven on Top" today. I can't remember ever not finishing a new Janet Evanovich novel the first day I got one. "Eleven's" no different! "Eleven" is different from its predecessors in that Stephanie Plum actually takes the advice of I've lost count how many people and quits her bounty hunter job in search of a real job. She's lucky--she gets the first job she applies for at the button factory, and the second with a local dry cleaners, and the with a fast-food chicken franchise "Cluck in a Bucket"....all with disastrously funny results. THe triangle between Steph, Joe Morelli, and Ranger is throbbing with tension. This is particularly so since Stephanie ends up working for Ranger at Rangeman Security--to keep safe. Which hunk is going to claim Steph this time--and for how long? I'm not telling! Steph is also being stalked by someone who tells her she thought they were dead. They attack with bullets, fire....Meanwhile, Steph, Ranger, and Joe are all looking for four Trenton men who have disappeared with their cars on the same day. This plotline is a real mystery folks and had me guessing all the way through the book. Definitely a great addition to the Plum series.... Oh yeah, and the laughs keep on coming. Your favorites are here: Grandma Mazur, the eighty year old teenager, the prospective brother-in-law Albert Kloughn... All the Stephanie books are better than Prozac and almost as good as chocolate to cheer a person up. Evanovich is right: "Eleven" is DEFINITELY on top.

Published by Thriftbooks.com User , 16 years ago
I bought this book around noon and just could not put it down.. I finished it within a couple of hours! I'm a big fan of the Stephanie Plum series -- and Janet Evanovich did not disappoint me with "Eleven on Top!!" I only wish it was longer, because now I'm already dying to read the next one! The book is filled with the usual Plum-isms.. exploding cars, Ranger vs. Morelli, and the crazy Plum family. I was very satisfied with the mystery element, as it kept me guessing until the end, but I definitely read these books for the humor, not the suspense! I recommend to anyone and will definitely be reading it again! A+!
Copyright © 2020 Thriftbooks.com Terms of Use | Privacy Policy | Do Not Sell My Personal Information | Accessibility Statement
ThriftBooks® and the ThriftBooks® logo are registered trademarks of Thrift Books Global, LLC