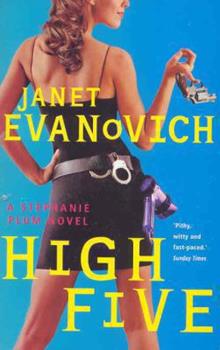 (Book #5 in the Stephanie Plum Series)

Out of bail skippers and rent money, Stephanie Plum throws caution to the wind and follows in the entrepreneurial bootsteps of Super Bounty Hunter, Ranger, engaging in morally correct and marginally... This description may be from another edition of this product.

Who was invited over she put the dress on for???

Published by Thriftbooks.com User , 20 years ago
This series just gets better and better! Laugh out loud funny, and full of high power action. Truly a winner. Stephanie is back to blowing up cars and nothing but attitude, you got to love her! She has broken up with her policeman boy friend Joe Morelli. She is broke, she has no work to do. She does get an unpaid investigative job to find her annoying cheapskate Uncle Fred. Stephanie ends up with a house guest of a dwarf. She does get some paying work moonlighting for none other than Ranger!!! Even gets a couple company cars that either get blown up or stolen.There is attraction now not only between Stephanie and Joe but Stephanie and Ranger. The ending leaves you hanging as we don't know who it was she invited over and put on her hot dress for. This book was the best in the series yet. I say that with each book as they keep getting better. The humor has you laughing off the chair and you can't put the book down. I recommend this series but I would read them in sequence from the beginning so you really get to know everybody.

More Bang for the Buick...Er, Buck!

Published by Thriftbooks.com User , 21 years ago
But seriously, folks...forget about what Grandma Mazur did at the all-male strip club (she put the dollar bill WHERE?). This book marks a change in this hilarious series that bodes well for the future.Every book in this side-splitting series has been a treasure. But this outing goes for less laughs and more plot, and the result is stunning (hehehe, an in joke). Not that I didn't find myself howling with laughter, once again in public, not that Evanovich's incredible bon mots don't grab you when you're not looking, but this time, there is actually a mystery with several subplots, and some real suspense.In this adventure, Stephanie's bounty-hunting activities are somewhat sidelined by her search for her missing Uncle Fred, a nasty miser whose possible widow, Aunt Mabel, is planning a Caribbean Cruise within 2 weeks of his disappearance. Nevertheless, the Code of the Burg is strict, and when one's relative is missing, one must do the right thing and bring him/her home. At her family's urging, Stephanie reluctantly accepts the task.But this is Stephanie Plum we are talking about here. And lest we think that things will run smoothly, there is the small matter of the angry dwarf. Then we have the exploding Porsche (NEVER let Stephanie drive anything other than her indestructible 1950s-model Buick!!!), more exciting viewings at Stiva's Funeral Home, the stolen Beemer, the psychotic homicidal rapist Ramirez, fresh out of prison and Eager to Stalk (we met this dude in Book 1, and he is not a nice person), and at least one serious stun gun mishap (I'm not telling, but watch out the next time you eat potroast at the Plum residence). I won't even talk about the spoiled son of the Arab Sheik, or what he wants Stephanie to do for $5.While Stephanie is handling all the above with her usual Burgish aplomb, there is a true mystery unfolding. What has happened to Uncle Fred, and why is there a string of chilling and possibly connected murders, all centering around a trash-collection company? Who wants Stephanie dead? Whose chopped-up body was in the trash bags? What is going to happen with Ramirez, who wants to "lead Stephanie to God"?All of these questions are answered in the most satisfying way, and the mystery is just as good as the humor. As for romance? Well...let's just say that Stephanie had better avoid Grandma Bella Morelli's Evil Eye, because her deepening "friendship" with Ranger has taken some interesting turns. Even Lula is taken aback. I can say no more.Rex the Hamster, move over. I'm joining you in that soup can while I read Book 6. It seems the only safe place to be!

Published by Thriftbooks.com User , 22 years ago
Once again, I found Janet Evanovich's Stephanie Plum series to be totally engrossing, well-written and an absolute page turner. I enjoyed the story line about her search for her missing uncle and was completely surprised when an old (and scary) character resurfaced to add to Stephanie's problems. Of course, her dilemma over Joe or Ranger didn't help matters and Janet's deliberately vague ending about Stephanie's choice had me on the edge of my seat. I absolutely recommend this book to those that enjoy reading the series and to those of you that haven't yet---pick up One for the Money asap!

Published by Thriftbooks.com User , 22 years ago
I have now read all five books. They are page turners, exciting, honest, & funny. This latest is just a great as all the rest! I was raised in Northern New Jersey & find her description of life in the "burg" about as real as any I have read about. She uses the language & demenour of residents in that part of the country. I am taking a course in writing & have told my instructor the fact that I would be very pleased if I could learn to write as she does. I have read many books of mystery, but find her's are mysterous & funny. Her characters are believable & defined. I find Grandma Mazur a real kick. She reminds me of my maternal grandmother. Her on-off affairs with Morelli very belivable. Ranger has the experience needed to be an off the wall guy, but real & sensative. I cannot say enough about the pleasure I get reading her books. I only hope there will be many more for me to read. I also hope I can become half as good at writing as Janet Evanovich is already.

A series worth reading

Published by Thriftbooks.com User , 22 years ago
When "One for the money" was given to me as a gift for my birthday in July this year, I did'nt realise how hooked this series was actually going to make me. With each novel the suspence grew, will she? wont she? will they? wont they? It practically drove me to the brink of madness. Only 5 months later, and I have just closed the cover of "High Five", and I thought that it was the best in the series so far. It is crammed with suspence, murder, deceipt, betrayal, sexual tension and the occasional arm and leg.Stephanie Plum is right in the middle of yet another New Jersey drama, with her uncle Fred going missing, and her aunty hiring her to track him down. Morelli is as gorgous as always, but this time around he's got competition, Ranger. I definately recommend this series and "High Five" in particular. It follows the criteria of a perfect crime novel, with an added bonus: Morelli. I garantee, if you read this book you will not be dissapointed, the ending is a killer though.
Trustpilot
Copyright © 2022 Thriftbooks.com Terms of Use | Privacy Policy | Do Not Sell or Share My Personal Information | Accessibility Statement
ThriftBooks® and the ThriftBooks® logo are registered trademarks of Thrift Books Global, LLC