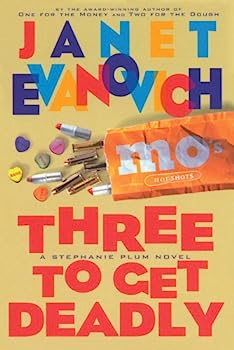 (Book #3 in the Stephanie Plum Series)

Stephanie Plum, the brassy babe in the powder blue Buick is back and she's having a bad hair day -- for the whole month of January. She's been given the unpopular task of finding Mo Bedemier,... This description may be from another edition of this product.

Stephanie Plum - You've Got to Love Her!

Published by Thriftbooks.com User , 20 years ago
"Three to get Deadly" continues Janet Evanovich's superb Stephanie Plum series and it does not disappoint. Our favourite inept bounty hunter, Ms. Plum herself, is back in action, surrounded by all of the eccentric and quirky characters from Trenton, New Jersey that we have grown to know and love. Fast-paced and full of laughs, "Three to get Deadly" is a book you don't want to miss.Stephanie Plum, bounty hunter extraordinaire, is on a new case that she really doesn't want to have. Usually her FTAs (failure to appears) are not the finest society has to offer and nobody minds Stephanie hunting them down. Unfortunately, this time Stephanie is looking for Moses "Uncle Mo" Bedemier, Trenton's favourite citizen and their beloved neighbourhood candy store owner. It seems strange to Stephanie that Uncle Mo jumped bail on the minor charge of carrying concealed, which would more than likely only have gotten him a slap on the wrist. Despite the hostility she's generating searching for Uncle Mo, Stephanie sticks with it, though it isn't easy to get even a single lead with all of Trenton banding together to protect Mo.But Stephanie has an uncanny knack for walking right into the middle of things, and while taking a unauthorized tour of Uncle Mo's candy store, Stephanie gets knocked out and wakes up next to a dead man. It doesn't take a genius to figure out that there's something more going on here than a concealed weapon charge, and as local drug dealers start turning up dead all over the place, it leads Stephanie to believe that good old Uncle Mo has become an anti-drug vigilante. The mystery in this book is top-notch, and it is blended perfectly with the laugh out loud humour that is so prevalent in this instalment. With Lula, the 230lb ex-hooker as Stephanie's sidekick, gun-toting Grandma Mazur always wanting to help out, and dangerously sexy vice cop Joe Morelli never far away, this book is downright hilarious, not to mention filled with sexual tension. But when terrifying men dressed in ski masks and coveralls start threatening Stephanie and her hamster, Stephanie realizes her life is once again in serious danger. And so, with a little help from mysterious and sexy fellow bounty hunter Ranger, it's up to Stephanie and her motley crew of bounty hunters in training to catch Uncle Mo and these masked men before Stephanie catches a bullet in the head."Three to get Deadly" is another great read in a truly wonderful series. Evanovich has a fabulous dry wit and impeccable comedic timing, which combine to make one really funny book. Stephanie Plum is so likable and so much fun to spend time with that I have read the first four books in this series in less than a week. Evanovich has created a marvellous character in Stephanie Plum; she's the kind of person you'd like for a friend and she makes this series what it is. "Three to get Deadly" is a fun-filled and suspenseful read and it comes highly recommended!

Published by Thriftbooks.com User , 20 years ago
Stephanie Plum, the lingerie buyer turned bounty hunter, after blackmailing her cousin Vinnie. As usual, Stephanie Plum's trials and tribulations had me laughing out loud! In this third book Stephanie is after "Uncle Mo," the local candy store/ice cream parlor owner, known by everybody in the neighborhood! Uncle Mo skips his court appearance for carrying a concealed weapon, and Stephanie, goes after him. Uncle Mo is nowhere to be found. The case soon winds up with attacks by strange anti-drug vigilantes, murdered men and porno films. The body count of the local drug dealers around his store continues to rise! Stephanie gets no help from the locals, only threats to leave uncle Mo alone. Lula, the prostitute turned file clerk, has a much greater voice in this novel, and she truly adds laughter to the story with one trip out on her bounty hunting training. Police officer Joe Morelli is back and Stephanie is even concerned he has a girlfriend since he no longer seems interested. Ranger is also back, with help and exercise! This novel you really get closer with all the characters. The family dinner time just wouldn't be the same if one of Stephanie's friends wasn't invited to join them. The book flows at a blistering pace, and Evanovich's writing style is packed with humor. The suspense is outstanding and it is the best mix of comedy and mystery out there. It is hard not to enjoy this book! I highly recommend this series you will laugh off your chair and out loud all the same!

A Must Have- Comedy and Mystery

Published by Thriftbooks.com User , 21 years ago
Again and again I laughed out loud while reading this book. Several times my husband made me read passages to him so he could hear what was so funny, and I have to report- he laughed out loud as well. Stephanie Plum is looking for Mo the candy store owner. She certainly doesn't let the fact that EVERYONE she knows is telling her he's not the type to do anything wrong stop her. She doesn't let the fact that everyone is calling her mother stop her. She has a job to do and do it she does. As the bodies pile up and the tension between her and Joe M. build, Stephanie does her job. The mysterious and sexy Ranger, Lula the ex hooker, the hilarious grandmother, worrying mother and reticent father all add to the book. I can't think of a series of books, in this genre, that I have enjoyed more. Rather than passing these on to my mother, I bought her the same books so I don't have to share. They are that good.

Published by Thriftbooks.com User , 22 years ago
Janet Evanovich has done it again. Three to Get Deadly, begins as Stephanie Plum, ex-lingerie buyer turned bounty hunter is given the go to pick up Mo Bedemier. Uncle Mo, as he's known in "the burg", Stephanie's working class, Trenton neighborhood, owns an ice-cream parlor/candy store, has missed his court appearance and seems to have left town. Stephanie's on the case and is soon caught in the middle of anti-drug vigilantes, murdered men and porno films. This is another terrific ride through Trenton with Ms Evanovich's cast of unrivaled, wonderful, quirky characters and Stephanie gets lots of help from her mentor, Ranger and vice cop, Joe Morelli. The writing is witty, irreverent and down to earth, with dialogue that will have you laughing out loud. Though the mystery itself is a bit of a stretch, it doesn't matter, because spending time in Trenton, with Stephanie and company, is such a joy. Start with One for the Money and read all the books in this series. They will put a smile on your face.

Read 'One for the Money' and got hooked!

Published by Thriftbooks.com User , 22 years ago
I picked up 'One For The Money' at a local bookstore after reading a review of the newest book in the series - I got hooked! I just finished 'Three To Get Deadly' yesterday and I am going to the store tonight to get the next one! Another reviewer said Stephanie never learns from her mistakes. Well, if she did we wouldn't have the laughs these books give us. I know there is a little of her in me - I don't always apply what I learned in the past to a new situation - sometimes we just forget at the time. She has alot of spunk and resilience! I really enjoy these books and look forward to more and more Stephanie Plum adventures! Hopefully something will happen with Joe Morelli!....
Trustpilot
Copyright © 2022 Thriftbooks.com Terms of Use | Privacy Policy | Do Not Sell or Share My Personal Information | Accessibility Statement
ThriftBooks® and the ThriftBooks® logo are registered trademarks of Thrift Books Global, LLC