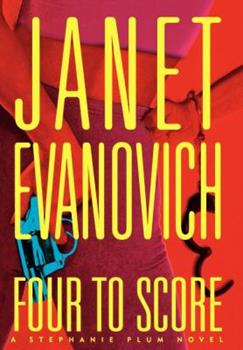 (Book #4 in the Stephanie Plum Series)

A Featured Alternate Selection of the Literary Guild and Doubleday Book Club and a Main Selection of the Mystery Guild Janet Evanovich, bestselling author of One for the Money , Two for the Dough , and Three to Get Deadly , scores big with Four to Score , her most thrilling Stephanie Plum adventure yet. Working for her bail bondsman cousin Vinnie, Stephanie is hot on the trail of revenge-seeking waitress Maxine Nowicki, whose crimes include bail jumping,...

Published by ethel , 1 year ago
I Read 4 Of Her Books No More. They Ae Like A Five Year Old Wrote Them. Awful Writer. Just Dumb Story Lines....She Is No Stuart Woods, Or Paretsky Or Cromwell And Never Will Be.

One of my favorite authors!

Published by Thriftbooks.com User , 20 years ago
This fourth book in the series is one of nonstop falling off your chair laughter. Stephanie Plum, bounty hunter is after Maxine Nowicki, who is free on a stolen automobile charge. Her boyfriend, Eddie Kuntz, also offers Stephanie money in hopes that she can retrieve something extremely valuable to him...love letters, he claims. The chase is on in this page-turning craze, and all of the extra added details that makes this adventure that much more funny! The cast of characters is helpful to Stephanie once again. Stephanie's family, especially Grandma Mazur, add pizzazz, depth, and a heck of a lot of humor to this great plot. Joe Morelli is also back and yes him and Stephanie finally get together! Lula, the large prostitute-turned-file clerk-slash-wannabe is hysterical in this book. Her quick wit and street humor keep you rolling. This fourth book also introduces Sally Sweet, a code-breaking transvestite 'drag queen" musician. Grandma Mazur comes right out and asks Sally what a drag queen does with his ding-dong and I died laughing. Stephanie's enemy, Joyce Barnhardt, also has a larger roll in this book, as the newest bounty hunter at the Vincent Plum bail bonds agency. This book is truly hysterical, pages keep turning with the fast paced humor and wit. This is the best book yet in the series and I thought three was good. This series is highly recommended!

This Book Is So Explosive, Your Home And Car Will Blow Up

Published by Thriftbooks.com User , 21 years ago
Nah, that would be just too unbelievable. Not for the bad-luck-with-hair bounty hunter, Stephanie Plum. This fourth book in the series is one of non-stop outrageous humor.Stephanie Plum is after Maxine Nowicki, and FTA who is free on a stolen automobile charge. Her boyfriend, Eddie Kuntz, also employs Stephanie's services in hopes that she can retrieve something extremely valuable to him...love letters? The chase is on in a page-turning frenzy, and all of the extra added elements that Janet Evanovich throws in makes the adventure that much more complete.The cast of characters is sensational once again. Stephanie's family, especially the show-stealing antics of Grandma Mazur, add color, depth, and a heck of a lot of humor to the already well-developed plot. Straight-faced cop Joe Morelli is also back to steam up the personal scenes, and do they ever get hot in this epic. Lula, the large prostitute-turned-file clerk-slash-wannabe skip tracer is also back, adding a hilarious friendship element with a touch of street humor. This novel also introduces Sally Sweet, a code-breaking "regional" transvestite musician who spouts out the F-word every chance he can get. Stephanie's main nemesis, Joyce Barnhardt, also has a seemingly larger voice in this novel, as the newest bounty hunter at the Vincent Plum bail bonds agency.This book is outright hysterical. Evanovich weaves together an amazing story of intrigue and thrilling suspense that flows so nicely, and ends in high speed mayhem that is just truly unbelievable. The witty dialogue, sensational Trenton setting, and fast-paced thrilling plot make FOUR TO SCORE a real winner. This is one of the best books in the series.

Published by Thriftbooks.com User , 22 years ago
Stephanie's back and better than ever with Four to Score, a funny, sexy romp through Trenton, New Jersey. Stephanie Plum, bounty hunter from hell, is on the trail of Maxine Nowicki, who forgot about her court appearance and jumped bail. In the process of tracking Maxine down, she uncovers murderers, counterfeiters and a fire bomber. Unfortunately, Stephanie's apartment is at the top of the fire bomber's hit list and she moves in with Joe Morelli. Now the fun really begins. As always, Ms Evanovich fills her story with quirky, wacky characters that just add to the fun and we get to see a lot more of the Plum and Morelli families. The writing is smart and down to earth and Ms Evanovich has a wonderful ear for dialogue. You'll laugh out loud at the antics of this fine cast. Do yourself a favor, start with One for the Money and read the whole series. Ms Evanovich doesn't disappoint.

Every book gets better than the last

Published by Thriftbooks.com User , 22 years ago
A few weeks ago I clicked on the icon for "High Five" by an author I had never heard about. All the reviews seem to say how good the plot was and how funny the book was. Since I hadn't heard of the author before I did what I usually do and find the earliest book by the author and start there. The early books are usually in paper back and cheaper. Generally an author develops characters along the way so that is what I did. I bought "One For The Money". Well I just loved it and quickly read 2 and 3 and am finishing "Four To Score". This is one of the funniest and most enjoyable series I have read. The only negative thing I have to say is that I have finally ordered "High Five" and when I am done I will have a long wait before the next novel comes out. If you havn't read any of the books I do recommend that you start from the beginning of the series and I hope you get as much enjoyment from them as I have.

Published by Thriftbooks.com User , 22 years ago
I came to the "Stephanie Plum"/Janet Evanovich books late in life (they were recommended to me at a review website) I proceeded to check out the first four at my local library. Of the four I have read so far, "Four to Score" has been my favorite. I loved it most because it delved more into the relationship between Stephanie and Morelli, sigh! I hope the next books continue on the same path! I love all the secondary characters too. Ecspecially Stephanie's grandma. What a hoot. I see a little bit of my family in hers, maybe that is why the book so appealed to me. I like the way the author pulls you into life in the berg or is it burg? whatever, I love these books, they are so different from everything else that is out there now. Keep up the excellent work Ms. Evanovich.
Trustpilot
Copyright © 2022 Thriftbooks.com Terms of Use | Privacy Policy | Do Not Sell or Share My Personal Information | Accessibility Statement
ThriftBooks® and the ThriftBooks® logo are registered trademarks of Thrift Books Global, LLC