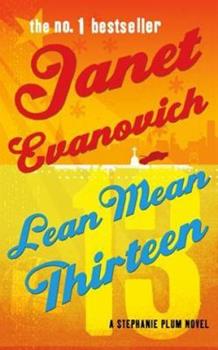 (Book #13 in the Stephanie Plum Series)

New secrets, old flames, and hidden agendas are about to send bounty hunter Stephanie Plum on her most outrageous adventure yet MISTAKE #1 Dickie Orr. Stephanie was married to him for about fifteen... This description may be from another edition of this product.

Published by Thriftbooks.com User , 14 years ago
Once again, Evanovich had me laughing out loud. I love her characters. I "know" those people. Strongly recommend this and the next one!

Published by Thriftbooks.com User , 14 years ago
Janet Evanovich is back to the humor between the characters that was missing from the 12th book of this series. I have gotten tired of most writers switching to murder/mystery. After you have read so many, you can guess who did it before the end. That's why I like this authors books. If you want to be entertained, you like characters that are funny, then you should enjoy reading Lean Mean Thirteen.

Still one of the best

Published by Thriftbooks.com User , 14 years ago
I agree with some other reviewers that things are getting a bit repetitive, and I wish something would happen one way or another with the men in Steph's life. But these are minor quibbles with a great series. It's still laugh out loud funny and one of the best mystery series out there. It's hard to find books with genuine wit and a good plotline; the closest to this I've read recently are fantasy, Karen Chance's Cassie Palmer novels. So yeah, this is still five stars for me!

Published by Thriftbooks.com User , 14 years ago
This is.... duh.... the thirteenth book in the Stephanie Plum series. Or actually, the 15th, if you include the two between-the-numbers books. This time, Stephanie's ex, lawyer Dickie Orr, goes missing, not long after Stephanie fought with him while planting a bug in his office for Ranger. And everyone--but most particularly Joyce Barnhardt, thinks Stephanie's responsible. Thing is, he never changed his will after their divorce, and it's not just Dickie that's missing--there's also a LOT of money missing. So Joyce becomes Stephanie's shadow, hoping Stephanie will lead her to Dickie or the money. Meanwhile, Joe's busy on a hush-hush assignment, Ranger's keeping an eye (and a GPS tracker) on Stephanie, and Steph and Lula are busy tracking down FTAs, including a hilariously wacky taxidermist with an explosive inventory. I agree with all the reviewers who complain about a lack of character development (or rather, character change--I think the characters are pretty well developed at this point), and the repetitive nature of the books--cars getting destroyed, the love triangle, Grandma Mazur will do something wacky at the funeral home, etc., etc. The thing is, though: I just don't care. I read a Stephanie Plum book maybe once a year (twice, if there's a between-the-numbers book), so there are generally 300 or more books in between. So if it's exactly what I expected, I don't mind. It's become a formula, yes, but I enjoy the formula--once a year. I expect if I read them all back to back, it would drive me batty. But I don't, so I'm happy.

Published by Thriftbooks.com User , 15 years ago
Don't we all just wait and wait for the next installment of Stephanie's life to come out so we can all go get cozy and read, read, read? I was very excited when my copy of LEAN MEAN THIRTEEN came in at the library. And I was not disappointed! Stephanie is up to her usual style of mayhem trying to make a living and live her life. This time around, besides being probably the worst bounty hunter in the state of New Jersey, Ranger needs Stepahnie's help involving her ex-husband, Dickie Orr. Once you meet the character of Dickie, you will understand how his name totally suits him! What a jerk! The plot involves our favorite characters from the rest of the series -- Stephanie's mom, kind of her dad, Grandma Mazur {my personal favorite}, Lula {who is my number two favorite!}, Morelli, Ranger -- you know who I mean -- you know them and you love them. Dickie goes missing and so does a huge amount of cash. Stephanie tries to find Dickie, do her bounty hunting job, be in love with both Ranger and Morelli, and also has to try hard to stay alive. Trouble ensues as Dickie's involvement with some big, seriously bad guys comes full circle. The book, without spoiling the story for anyone, is the usual ups and downs, car wrecking, madcap fun spree it always is. The characters who Stephanie's trying to bond out are really good this time around. I especially enjoyed Carl Coglin, the taxidermist. His personal little zoo is a riot!!! This being said, what I didn't like about the book -- and previous ones - is the go nowhere, stuck in the mud relationship Stephanie has with Morelli and Ranger. She loves them both. They both love her. They will both wait for her until she makes up her mind. Come on! This is getting old and Stephanie should make a decision before fans tire of this scenario. Many other reviewers mentioned the same thing -- we need to make a man decision here and make a choice!!!!!!!!!! Maybe in number 14 that will be the case. I loved the usual arguments, family problems, family dinners, bounty hunting problems, and the characters Stephanie tries so hard to pick up as part of her job. I did laugh, but admittedly, not as much as in previous books. I am NOT tired of these books, I love them. I just think most readers need/want some NEW material and for things to get a move on in Stephanie's love life. I do not expect these books to be deep or serious, they are meant to be light, fun reading, and that they are! However, the three-way realtionship is tired. This is another winner. I will now wait and wait and wait for number 14 to come out, probably next summer. I do enjoy this series but would really like something refreshing, different, and new to HAPPEN. Read this book. If you haven't read the series, you need to. You will absolutely love them. Thank you! Pam
Trustpilot
Copyright © 2022 Thriftbooks.com Terms of Use | Privacy Policy | Do Not Sell or Share My Personal Information | Accessibility Statement
ThriftBooks® and the ThriftBooks® logo are registered trademarks of Thrift Books Global, LLC