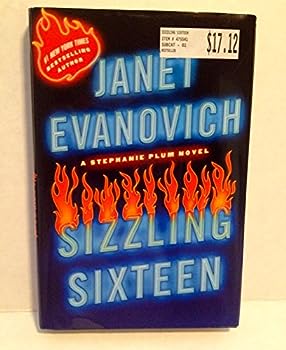 (Book #16 in the Stephanie Plum Series)

Trenton , New Jersey , bounty hunter Stephanie Plum has inherited a "lucky" bottle from her Uncle Pip. Problem is, Uncle Pip didn't specify if the bottle brought good luck or bad luck.... BAD LUCK... This description may be from another edition of this product.

Published by Thriftbooks.com User , 12 years ago
Having read all the others in the Stephanie Plum series, I was looking forward to this one, and was not disappointed. It was great to have Mooner in the story again. Grandma Mazur was at her crazy best. And I particularly enjoyed the Stephanie/Lula/Connie teamwork as they tried to ransom their slimy boss Vinnie, and save their jobs. If I have a complaint at all, it's that my Kindle edition of this book had a lot of typographical errors, mostly mixed-up homonyms ("shears" when "sheers" should have been used, and so on). Looks like someone left most of the editing up to the spell-checker.

My favorite of them all

Published by Thriftbooks.com User , 12 years ago
I truly loved the insanity of this book; it is my favorite in the series. Stephanie, Connie and Lula have to rescue Vinnie from a variety of bad guys (and one bad girl), and the solutions they create are often hilarious. It is not a mystery, per se, but rather a very enjoyable tale of friends, family and Hobbits. The 16+ Stephanie Plum books have definitely moved in a more-funny, less-scary direction as the series has gone along, and that's fine with me. Life in 2010 holds so many challenges -- reading about these familiar characters is, for me, a wonderful treat. It is like spending time with old friends. And, my local bakery benefits because I crave donuts whenever I read them. The end of "Sizzling Sixteen" left its characters at a crossroads -- there are many directions the series can go from here. I am looking forward to seeing what the future holds for Stephanie and her friends.

Published by Thriftbooks.com User , 12 years ago
The latest in the Stephanie Plum series does not disappoint. In this one, Vinnie, Stephanie's boss, is kidnapped and Stephanie decides, with help from Lula and Connie, to try to rescue him, with varying degrees of success. The continued romantic triangle of Ranger/Stephanie/Morelli heats up. I laugh out loud while reading these books--I love the antics of Stephanie, Lula and Grandma. I highly recommend these books. [...]

Cows (and an alligator) in Trenton?

Published by Thriftbooks.com User , 12 years ago
I always knew that New Jersey was a very strange state, and the Stephanie Plum series of novels reinforces that opinion. Within the pages of these books we find all kinds of wierd and wacky people, strange and often exotic animals, dangerous (and often extremely funny) felons, and disfunctional family life. What more could anyone ask for light reading, especially in the summertime? I realize that many reviewers are tiring of the almost repetitive folks and incidents in these books, but even though I can almost telegraph what's going to happen on the next few pages, I anticipate it happily, for these books just give me a laugh when I need it, especially in these tough economic times. Who cares if some of these things have happened before; the author does try to present them in a new way, even though she doesn't alays succeed. The sexual problem Stephanie has in deciding between Ranger and Morelli does tend to weary a reader at times, but it's not a themendously vital part of the plot, so I just go along with it. After finishing one of these books, I suddenly get a craving for a big helping of fried chicken from Cluck-in-a-Bucket!

Published by Thriftbooks.com User , 12 years ago
It's so hard to wait a year for a book to come out and then finish it in a few hours. It's a little let-down--kind of like Christmas. But if you like the characters and want to catch up on another couple of days in the doughnut eating lives of Stephanie and Lula jump in and buy the book. It's not as full of belly laughs as usual, but it is more exciting than the last few in the series and shows potential for growth in all the characters. The huge decrease in potty humor and blown up cars (I still can't quite believe that only only was destroyed) made this a much more interesting read. Quite grand fun and a nice way to spend a sizzlin' hot summer afternoon.
Trustpilot
Copyright © 2022 Thriftbooks.com Terms of Use | Privacy Policy | Do Not Sell or Share My Personal Information | Accessibility Statement
ThriftBooks® and the ThriftBooks® logo are registered trademarks of Thrift Books Global, LLC