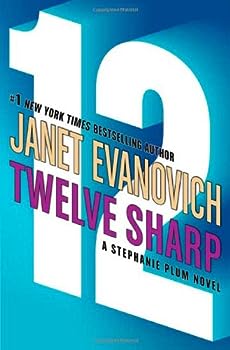 (Book #12 in the Stephanie Plum Series)

Welcome to Trenton, New Jersey, where bounty hunter Stephanie Plum's life is about to implode in Jane t Evanovich's wildest, hottest novel yet FIRST A STRANGER APPEARS While chasing down the usual... This description may be from another edition of this product.

The best in awhile...

Published by Thriftbooks.com User , 16 years ago
Evanovich brings back Stephanie Plum and all of her cohorts (leaving out, thankfully, her sister & brood) in a tale that has Ranger seemingly cloned and hiding out from the cops, based on the crimes committed by whoever is impersonating him. Bravo to Evanovich for not blowing up Stephanie's Mini-Cooper! On a more serious note, this particular plot, about the kidnap of a child, hit a less over the top vein than some of the earlier Plum novels. And I must say, I loved the way the story evolved and the very real dangers and feelings the characters displayed in the story. No clowns for villains here. I have read other reader's comments about the focus on sex while Ranger's child was missing and the seeming willingness that Stephanie had to cheat on Morelli. I don't dismiss those as concerns on some readers' part, I just didn't feel they detracted from the book or the plot. I enjoyed it thoroughly and read it in record time. More, More!!!

Published by Thriftbooks.com User , 16 years ago
Stephanie Plum fans know what to expect...a little adventure, a lot of LOL moments, and some great sexual tension. Twelve Sharp delivers on all of these. Grandma, Sally, and Lula provide most of the LOL moments. The adventure this time is a personal one, for both Steph and Ranger. The sexual tension between Ranger, Steph, and Morelli is all the better for being more out in the open. Steph finally admits, at least to herself, how she feels. This is no way solves the triangle, but complicates it further. The plotting this time around was stronger and tighter than in previous books. The action was enough to have me on the edge of my seat, and occasionally holding my breath. I've seen a lot of reviews that want Steph to grow up, to choose between these two extraordinary men, etc. In short, they want her to be someone other than herself. I like Stephanie Plum just the way she is, thanks. Do I want a resolution to the triangle? Sure...eventually. But I see no need to be a fanatic about it. Steph's life, as is, is giving me hours of enjoyment. Is there really a need to fix it? Not in my opinion. And really, doesn't the fact that so many people have such passionate opinions about what these fictional characters should do just prove that JE's gotten it right? I'll be eagerly awaiting Thirteen. It's going to be a long year.

Another exciting book in the Stephanie Plum series

Published by Thriftbooks.com User , 16 years ago
It's business as usual at Vinnie's bonding agency. Stephanie Plum, perhaps the second worst bounty hunter in New Jersey (her recently licensed sidekick Lula edged her out for first place), is staked out waiting for a bond jumper to surface when a woman in black walks up to her car and introduces herself as Ranger's wife. Carmen Manoso claims that Ranger has married her, dumped her, emptied their bank account and fled the scene, all within the last six months. This comes as a major jolt to Stephanie who knows little about the mysterious and secretive Ranger, but finds it impossible to believe he is dishonorable enough to have done this to any woman, including herself. Carmen, convinced he's shacking up with Stephanie, proves how upset she is by firing a bullet into the rear fender of Stephanie's new Morris Minnie. Carmen proceeds to stake out the bond agency around the clock, waiting for Ranger to show up. Meanwhile, it checks out that Ranger is missing along with his 12-year-old daughter who has been kidnapped from her birthmother and stepfather in Miami, launching an all-points search for Ranger. Stephanie knows little about Ranger's daughter except that he has maintained a good relationship with her and her birth mother. Facts just don't add up, and Stephanie launches a search of her own. For the first time, Janet Evanovich fleshes out the elusive Ranger. Left to our own devices, most readers have imagined (or fantasized about) what he looks like, who he really is and how he became the head of a global, super-secret private security force. Now we get a glimpse of the private Ranger as he goes to ground until his personal problems are resolved. Ranger's higher profile doesn't edge out Joe Morelli, who is ever stalwart, sexy and faithful, despite the complicating involvement between Ranger and Stephanie when she finally catches up with him. Fans will welcome the continuing antics of Grandma Mazur, Lula and Sally Sweet. A most unlikely rock-and-roll band gives new definition to the term "moonlighting." Stiva's Funeral Home, under new management after the demise of the former owner in ELEVEN ON TOP, continues as a pivotal setting for the action-filled events triggered by Ranger's disappearance. The new plot twists, along with familiar characters, pretty much guarantees a continuation of the phenomenal success of the Stephanie Plum series. It was time to learn more about Ranger --- can Janet Evanovich surprise us again? --- Reviewed by Roz Shea

Published by Thriftbooks.com User , 16 years ago
I dove into Twelve Sharp yesterday, read about 250 pages that day and finished it early this morning - so you can tell I love this book - This is a laugh out loud book. The plot mostly centers around Ranger and a Ranger wannabee who has kidnapped his daughter - he turns to Stephanie Plum to help him find the guy and Ranger's kid. The chemistry is hot between Stephanie and Joe, and Stephanie and Ranger - Both guys to swoon for - Stephanie's parents are a perfect foil for her and her Grandma Mazur - I think Grandma Mazur is a hoot - she gets in more trouble and tells it like it is - hilarious!!! Lula is more outrageous, Sally Sweet has her in his rock band, with bizarre concerts - I could go on and on - But Ms. Evanovich keep going strong where some serial writers are starting to fade a little - A delightful read!
Trustpilot
Copyright © 2022 Thriftbooks.com Terms of Use | Privacy Policy | Do Not Sell or Share My Personal Information | Accessibility Statement
ThriftBooks® and the ThriftBooks® logo are registered trademarks of Thrift Books Global, LLC