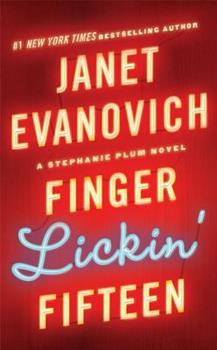 (Book #15 in the Stephanie Plum Series)

Recipe for disaster: Celebrity chef Stanley Chipotle comes to Trenton to participate in a barbecue cook-off and loses his head - literally. Throw in some spice: Bail bonds office worker Lula is witness to the crime, and the only one she'll talk to is Trenton cop, Joe Morelli. Pump up the heat: Chipotle's sponsor is offering a million-dollar reward to anyone who can provide information leading to the capture of the killers. Stir the pot: Lula recruits...

Published by Thriftbooks.com User , 12 years ago
In this fifteenth Stephanie Plum adventure, we follow her in her job for a bail bondsman, but typically, her adventures carry her off onto divergent pathways as she inadvertently gets mixed up in a murder case. A gruesome decapitation, no less! And one of her coworkers is a witness, which also puts her at risk. Stephanie also is trying to figure out who is breaking into the homes with Rangeman security systems--a part time gig that lands her in another batch of trouble--while trying to escape the various fire bombs that always seem to be going off around her. Not to mention the paint bombs. Yes, just as in previous books, Stephanie Plum seems to be a disaster waiting to happen everywhere she goes. I love the way this character is so down-to-earth and real, almost as if she's part of our neighborhood or our family. She is a flawed, yet courageous soul who loves her life, even when it's falling down around her. Finger Lickin' Fifteen (Stephanie Plum Novels) is my second book by this author, and hence satisfies one of my reading challenge tasks. But I'm not stopping with this one...I want to go back to the beginning of this series and read them all...which is why I'm awarding five stars to this book.

Published by Thriftbooks.com User , 12 years ago
Finger licking good is a fast read and very interesting. Janet Evonovich always writes a very amusing and very good mystery. There is enough charactors that everyone has a faavorite. Stephanie Plum is her usual bumbling, efficient torn between lovers with kinkie friends bondsman agent. Very good book and I am looking forward for more.

I laughed out loud at least twice each chapter - thought this was as good as any in the series.

Published by Thriftbooks.com User , 12 years ago
In some ways, I feel sorry for popular authors, since I think readers come to expect something greater than anyone can deliver. In the case of Evanovich, I think some of the reviewers seem to be expecting great literature. Talking about Plum not "growing" as a character? Get a grip, this isn't Hamlet -- it's a funny romance, with a bit of mystery thrown in. Actually, I think Plum HAS "grown" as a character. She seems to be getting better at the bounty hunter stuff, she's clever (in this book, she solves a mystery that Ranger hasn't been able to), and she seems to have learned not to jump without thinking into the bed of a guy she's attracted to. She seems more self-confident and less pathetic (as she is in some of the early books -- less is made of her fear of guns, for example). This book contains at least two plots: The first plot involves a murder witnessed by Lula, that leads to the killers trying to get rid of Lula and Lula, in response, entering a barbecue contest even though she really can't cook anything, let alone barbecue. The second plot involves breakins at houses and businesses protected by Ranger's security company -- how are they getting the codes to disarm the system? Evanovich has such a knack for vivid descriptions deftly done with a few sentences, so that you can see everything as though you were watching a movie. It's hard to believe that these characters and settings don't really exist. She's also skilled at funny dialogue and situations. Finally, she creates some great characters -- Morelli and Ranger represent two types of guys women are attracted to: both sexy, but one is on the side of law and order and the other is a bit shady (although less so than in earlier books in this series). I really needed cheering up when I read this book, and I'm grateful to Evanovich for providing me with some laugh-out-loud moments -- and it's not that easy to get me to laugh out loud.

Still funny for me

Published by Thriftbooks.com User , 13 years ago
I found myself laughing aloud again at Finger Lickin' Fifteen. When I need a really good laugh and a good story I know that Stephanie Plum and crew will always deliver. This story features Lula in all her glory as she becomes witness to the heinous murder of a Food Network chef. (And aren't there a few on the Food Network show that we would like to see at least stumble a bit?) But I digress,the entire crew is on board as usual as Lula and Stephanie pick up the usual skips and attempt to hide from giggling murderers who want Lula brought down since she witnessed the crime. Various scenes are hysterical,particulary the local community "flasher" who is keeping the old ladies in the burg very entertained and another scene with Lula shooting at suspects from the car. This is light reading everybody. Jump on board and have some fun!
Trustpilot
Copyright © 2022 Thriftbooks.com Terms of Use | Privacy Policy | Do Not Sell or Share My Personal Information | Accessibility Statement
ThriftBooks® and the ThriftBooks® logo are registered trademarks of Thrift Books Global, LLC