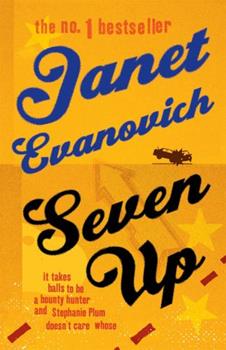 (Book #7 in the Stephanie Plum Series)

The smash-hit #1 bestselling author Janet Evanovich takes you on the ride of your life in the next Stephanie Plum adventure, Seven Up! Semiretired mob guy Eddie DeCooch is caught trafficking... This description may be from another edition of this product.

one of my favorite authors!

Janet Evanovich can keep you into your story!

Published by Zookeeper , 3 years ago
I have read all of Janet's books and have grown to love her characters. They all have a completeness to them that make you feel as if your really know them. This goes for the whole "Number Series".

Published by Thriftbooks.com User , 18 years ago
Janet Evanovich has such a way with writing comedy. I love her Stephanie Plum books. Its truly amazing how she can come up with all these different stories. I just love them! Stephanie continues her bounty hunting and at times is just so hilarious. You'll never believe how she get's revenge on Joyce Barnhart, her bitter rival and arch enemy.. This time the chase is after Eddie DeChooch. Along with Grandma Mazur,Morelli,Ranger,Mooner,Dougie, Bob, and a couple more people she picks up along the way, Stephanie goes for another wild ride:) This is a book that will keep you laughing so hard you'll be in stiches. I often yearn to be in her shoes. This reviewer recommends Seven Up to anyone looking for a good laugh,and I give it my highest rating:)

Still gets five stars from me!

Published by Thriftbooks.com User , 20 years ago
Although this latest Plum novel didn't have the humor and strong plot as the other I still could not give it less than five stars. This book went fast and was very enjoyable.The end was a long waited surprise with Ranger! Stephanie calls Ranger for help and the heat is turned up on the relationship between Ranger and Stephanie.Joe and Stephanie and speaking of the idea on marriage. Of course Stephanie's family is all for the idea!Mooner, who was introduced in the last book plays a bigger role.Stephanie and Lula are riding a Harley this book.Even though the laughter was not there as in the others this book should not be missed. If you follow this series. If you are a new reader then start with the first book and work your way through. You will be glad and really enjoy it!

Published by Thriftbooks.com User , 21 years ago
I had to give this book five stars--even though the ending leaves you in killer suspence, just like the last two books. No other books make me laugh out loud or shake my head in disbelief like the Stephanie Plumb series. Who else could have such bad but good luck? After all it's tough to chose between Joe Morelli and Ranger (we should all be so "unlucky.)If you are worried that you don't have time to read this book- stop worrying, it took me slightly over 24 hours (yes, I work.) It's easy to read and you don't want to put it down because you want to find out what happens with Grandma Mazeur, where Dougie and Mooner are, if Bob the dog will really eat a couch, what Ranger's next move is, and how far will the wedding actually progress. Not to worry, it all turns out good with all the usual (ruined cars, Steph's mom ironing, her apartament getting broken into), and unusual stuff, which I won't tell here in this review, becaue that's what makes the book so much fun (smile.)...

There's one thing terribly wrong with all Evanovich books.

Published by Thriftbooks.com User , 21 years ago
The wait until the next book comes out is maddening. Seems like I've twiddled my thumbs for ages waiting on "Seven Up" to be released....and the day it was, I was waiting at the bookstore ready to elbow anyone between me and the display! Those yummy men are back to "play" with Stephanie; meaning Joe Morelli and Ranger. How is that girl ever going to decide between the two of them when both are so wonderfully male and magnificent? Then of course there's Grandma Mazur at her zany best and an estwhile little known family member makes an appearance. Stephanies "perfect" sister Valerie whose "perfect" marriage has bit the dust, leaving her to contemplate the possible advantages to becoming gay. Lots of laughs are evoked through her decision to make lifestyle changes while living with her and Stephanies parents. Mother Plum is menopausal and frustrated, Father Plum is trying desperately to stay in his own world and ignore the chaos around him and Grandma is, as always, looking to be where the action is! Throw in Bob the dog, and those pharmaceutically impaired space cadets, Mooner & Dougie and it's once again madcap insanity from page one to the last page.I don't know if I agree that this book is not as well written as the previous 6. I know I laughed just as hard and if it were possible to give any Evanovich book more then 5 stars I'd do it....just for the laugh factor alone! You can't read a Stephanie Plum book and not walk around with a silly grin on your face for two days after you've completed reading it. If you know anyone that's depressed, give them a Janet Evanovich book to read. Doesn't matter which one....they're all excellent for a lot of chuckles!

Published by Thriftbooks.com User , 21 years ago
OK, I confess, I am a devout fan of Stephanie Plum, bounty hunter extraordinaire and her cohorts, wild and wonderful people who inhabit these tales with verve and humor! What's not to like in an eccentric (and armed) Grandma or a confused but devastatingly attractive cop? If you have never enjoyed a Plum adventure, you might want to try starting at the beginning (One for the Money)although each story is stand-alone fun! However, I think much of the richness of this book comes from already having met these characters in earlier novels and watching them grow - my enjoyment was enhanced by my history with these wonderful folks! Stephanie has her inevitable highs and lows in this book as she pursues eldery Eddie DeChooch for bail-jumping - Joe Morelli is still making Stephanie itchy, Grandma still favors Stiva's Funeral parlor viewings as her entertainment of choice, there are FTA's to be brought in, and Ranger - ah yes, Ranger!!! As we have come to expect (albeit with teeth clenched) Janet Evanovich has left us with another cliffhanger and it only took about ten minutes of screaming for me to get past it!!! Janet must be an amazing person to create such a delightfully funny, wild and wonderful world - if you love laughter with your crime and romance, do yourself a favor and treat yourself to all the Plum books, not just this one - you won't regret it!
Trustpilot
Copyright © 2022 Thriftbooks.com Terms of Use | Privacy Policy | Do Not Sell or Share My Personal Information | Accessibility Statement
ThriftBooks® and the ThriftBooks® logo are registered trademarks of Thrift Books Global, LLC