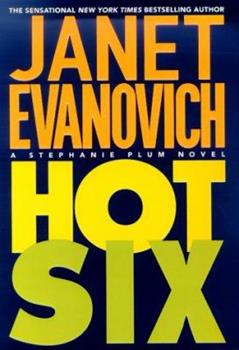 (Book #6 in the Stephanie Plum Series)

Published by Valerie Whitewolf Heike , 3 years ago
I read on my Youtube channle 'Val Whitewolf Media' I believe books hold so much warmth and sensational enjoyment.I was pleased and delighted reading Janet Evanovich to the world of Youtube it was as fun and full of emption as Susan Wilson 'The dog that saved me

Published by Thriftbooks.com User , 20 years ago
This is the sixth book in the Stephanie Plum series, New Jersey's hysterical bounty hunter. In this book, she is asked to pick up Ranger! Her friend and fellow bounty hunter, her mentor Ranger, who is also sought by the police for questioning in the murder of an organized crime figure. Can she do this and go after her friend? Stephanie believes Ranger is innocent and if anything, only kills bad guys. Joe Morelli, gorgeous cop friend, is here in all his glory and the end was very surprising from Joe. Stephanie's hysterically funny grandmother has moved in with her. This totally ruins Stephanie's sex life! A cop friend has asked her to dog sit while he goes on vacation, and doesn't return to take the dog back. Move over Rex here comes Bob! A new character emerges, Mooner. Mooner is an always stoned guy and funny. He adds considerably to the laughs in this Plum mystery. This is a very entertaining series. I have never laughed out loud with any book as I do the Plum series. The pages really turn as they are truly delightful reading. Hot Six is no exception, it is a 5 star book!

Published by Thriftbooks.com User , 22 years ago
This is the sixth book in the series about Stephanie Plum, Trenton, New Jersey's hysterically inept bounty hunter. In this latest escapade, she is searching for her friend and fellow bounty hunter, Ranger, who is also sought by the police for questioning in the murder of an organized crime figure. Stephanie believes Ranger is innocent and if anything, only kills bad guys. Joe Morelli, hunk cop, is here in all his glory and there's a surprise at the end, which I hope will be answered in the 7th book!Stephanie's hysterically funny grandmother has moved in with her. A cop friend has asked her to dog sit while he goes on vacation, and has no intention of taking the dog back. The dog, Bob, as it turns out has a strange eating problem, he eats everything and anything. There are a couple scenes involving, ah, dog doo that had me LOL and rolling! A new character emerges, Mooner. Mooner is a chronically stoned guy and very funny. He adds considerably to the chuckles in this new Plum mystery. Other critics have written that Evanovich doesn't write mystery, or that the plot hasn't changed, etc., etc., etc. In this dreary day and age anything that can make me laugh out loud is worth reading, for sure.

Stephanie Evanovich does it again!

Published by Thriftbooks.com User , 22 years ago
Someone has shot Homer Ramos in his father's office building and then set the building on fire. Trouble is, there's a security tape showing the delectable Ranger as the last person out of the building. Jersey bounty hunter Stephanie Plum needs to find Ranger fast, for both professional and personal reasons. While Stephanie is busy looking for Ranger, her Granny Mazur moves in with her. Granny's taking driving lessons and the proud owner of a red 'Vette bought at a 'fire sale.' She's still toting her .45 in her purse and is as big a hoot as ever. Between Granny's snoring, arch-rival Joyce's hounding her, Ranger's midnight break-ins, and Morelli's proximity, Stephanie isn't getting a lot of sleep and a regular job at McDonald's is starting to look pretty good to her. To further complicate matters, Stephanie's being tailed everywhere she goes by two goons who work for a man who thinks Ranger has something that belongs to him and that Stephanie will lead him to Ranger. Lula and Connie are back in 'Hot Six', plus Bob, the dog Stephanie has inadvertently acquired. Bob is a loveable idiot who I hope sticks around. All of these volatile characters combust off the pages in an explosion of lunacy and laughs which is just sheer delight to read. I laughed out loud 'til my stomach hurt. The mystery gets solved and Stephanie escapes immolation by the seat of her pants; alas, another couple of her cars aren't so fortunate. Stephanie proves once again that she can get the job done, but her love life is as schizo as ever. Evanovich just keeps getting better and better. Bravo!

Consider yourself 'Plum Lucky' to read this book!

Published by Thriftbooks.com User , 22 years ago
For all those fans who have followed bounty-hunter Stephanie Plum's haphazard adventures, 'Hot Six' is well worth the wait. Those looking for a funny and exiting read will also be fulfilled. Stephanie runs through the book in a comedy of errors; plagued by a killer zit, Pakistani hitmen and her near senile Grandma Mazur. Ranger, Stephanie's mentor and sometime partner (not to mention object of her lust) has Failed To Appear to court. To make matters worse, he was caught on security camera leaving a building that was soon after torched, and contained one very dead gangster's son. Stephanie tries to help him stay on top of the law (and is dangerously near to ending up underneath him) as well as dealing with a new room-mate (her Grandma), a new furry friend, a boyfriend so hot that he's almost melting, and a plethora of dangerous but amusing FTAs. The gang from Vinnie's Bond Agency are all there, Lula, Connie and even the repulsive Joyce Barnhardt. It has been interesting to follow the character growth of (especially) Stephanie and Joe Morelli. We find this here as Stephanie gets a little more hardcore and Joe shows one or two emotions. This book slots in perfectly with the continuing Plum Saga, Evanovich proves that sequels can still be rivoting and quality material. And as for the end...... well all I can tell you is that Evanovich throws in another surprise, and leaves me waiting on the edge of my seat for the next book! Read it for yourself!

Published by Thriftbooks.com User , 22 years ago
I discovered Evanovich's Stephanie Plum series the last week of May 2000. Books one through five were finished by June 10, 2000. Hot Six was released June 20th, and I finished it on June 22d. Look, I have a life, honest. Mystery books come in and go out of my bookshelf. This series is here to stay. In Hot Six Evanovich continues to satisfy the demands of this picky reader. Stephanie Plum, still-learning bounty hunter from the burg of Trenton NJ finds herself in the middle of it again, with favorite characters present and driving poor Stephanie nuts: Grandma Mazur, the gang at Vinne's bond office, the ever elusive Ranger, and of course everyone's favorite handsome rouge cop, Joe Morelli. Not just more of the same though. Evanovich adds new colorful characters to her well-developed cast, folks I hope we'll see again. The book jacket tells you about the story. Let me tell you why you should read it. This book, like the rest in the series, is fast-paced and full of humor, from the tried and true characters, to the new and often nutty characters. So many mystery books have "downtime", where we leap into the next day or skip over how we get some information, and forget the drugery of meals. Hot Six if full of detail, and the belly laughs come from the detail. Hot Six takes you all the way, showing you the day in and out, with all the guffaws. It draws its humor during "down" times in the case - the surveillance, the what-is-going-on-in-the-world-while-the-main-chase-is-on. Evanovich has a true talent for efficiently developing her characters into lively personable and oh so funny people that could, but thank goodness some don't, live next door. All this, while still developing a main plot engine that drives the story ahead at an impossible-to-put-down pace. I laughed out loud throughout this entire book. I've read some good mysteries. This series is the best, and Hot Six has lived up to this reader's expectaions and anticiapations.
Trustpilot
Copyright © 2022 Thriftbooks.com Terms of Use | Privacy Policy | Do Not Sell or Share My Personal Information | Accessibility Statement
ThriftBooks® and the ThriftBooks® logo are registered trademarks of Thrift Books Global, LLC