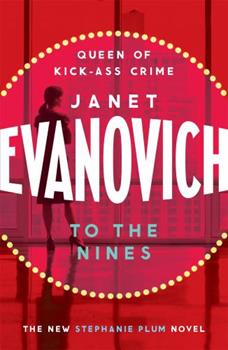 (Book #9 in the Stephanie Plum Series)

Stephanie Plum! I love her, a girl after my own heart!

Published by April On The Beach , 3 years ago
I bought the first three books in one. It sat in my room for at least a year before I even picked it up and looked at it. Well I decided to check it out that evening. It's been a whirlwind ever since! I am now on "Finger lickin Fifteen" that includes the "between-the-numbers" books as well, the "Plum Spooky" was the best one out of those books! Dang that Diesel sounds like what I would..... Let's leave that there! Stephanie lives a pretty colorful life, and doesn't even mean to! I can really relate to this woman! Life is an adventure, that's starts when she walks out the door! I think my choice would be Ranger, more of a challenge! When it's time to settle down it would be Joe, with Ranger on the side!!! Yeah!!! This lady really knows how to write! When I read it's like watching a movie, and this series is a "can't put it down" books! It's a rollercoaster ride from page one to the last page! The barrens in "Plum Spooky" was a Kool place, it'd be a great place to check out . I getting ready to start 15, which is my last book time to order!! I just ordered, 16 thru 22. Don't waste anymore time get the Stephanie Plum novels by Janet Evanovich. You will NOT BE SORRY!! Gotta go, I gotta date with Ranger or Joe, Hahahaha!!!

Published by Thriftbooks.com User , 19 years ago
We've read all the author's books about Trenton-based bounty hunter Plum, and had feared we were tired of them when in "Seven" and "Eight" the stories seemed weak and the humor forced. "Nines" corrects that with a real pleaser ? plenty of natural humor, an almost gripping plot putting Steph in real danger, and lots of sexual tension with Ranger and Morelli. The other regulars -- Bob the dog, Grandma Mazur, Vinny, the parents, sister Valerie (and father-to-be Kloughn) ? especially fellow "helper" Lulu, whose dieting efforts in the story were outrageously funny, contributed to the good humor we had come to expect from the earlier books. After an opening scene in which Stephanie captures a greased up "skipper", her hunt for a fellow named Singh, secured by a visa bond (something we learned about in ths book), caught her and Ranger in a gruesome computer fantasy game gone bad: where the losers not merely failed to proceed in the game but got killed for their sub-par efforts. Soon enough, Plum herself becomes the prize in this game of hunt or be hunted. While this series is not particularly designed to create suspense, this one rated up there close to the serial killer novels of John Sandford. Evanovich even managed to work in some subtle relationship and trust commentary regarding close colleagues of the opposite gender, involving separately both Steph and her current roommate Morelli.So -- not just a good beach book, but Plum back in her finest with an honest to goodness whodunit, with the crazy funny cast of supporting characters all in good form. Enjoy!

Published by Thriftbooks.com User , 19 years ago
This is ellen in Atlanta, and can think of no better read than the world of Plum! This book is a perfect blend of sex, humor, adventure, mystery, etc. Moreso than the other 8 books. The side trip to Vegas was an added treat - This book also blends the perfect combination of sexy hunk Joe Morelli and the steamy Ranger - tag teaming to take care of Stephanie - Although the murderer is suspected early on, what a ride to the last page - Only wish Grandma Mazur was featured more - her visits to Stiva's Funeral Home are legendary and any page with her and you have to dry your eyes from the tears of laughter - Ms. Evanovich continues to impress with her wit and perfecting Stephanie's life and adventures - Love the Yellow Escape! My brother drives one and it is a fun car and perfect for her adventures, but I have a vision of an explosion coming on - Stephanie isn't too good with cars, although with this book, Ranger's (oooh Ranger) merry men get the brunt of the damage - If there are some and I cannot see many - who haven't read all of the Stephanie Plum books, go back and enjoy them from One for the Money on to this wonderful book - This is the best! I read this book in one day and swore to myself to stretch it out but from the first page I was laughing so hard I couldn't put it down - will never think of Winnie the Pooh again without thinking of vasoline...

Couldn't Put it Down

Published by Thriftbooks.com User , 19 years ago
To be honest, I was afraid to read the latest Stephanie Plum novel, 'To the Nines', because I wasn't very impressed with the previous Plum installment 'Visions of Sugar Plums' - plus, when I read 'Hard Eight' last year, I thought I might be growing out of my Stephanie Plum phase. But having been a huge supporter of this series, there was no way I was going to pass up reading this latest one - whether I got disappointed or not. Well, I was not disappointed. In fact, I started reading the book today, and finished it just a couple of minutes ago, and I couldn't have been more pleased. I couldn't put the book down until I finished it. It starts off with its signature humor and slapstick apprehensions, and only gets better from there. This time around, Stephanie's job is to track a missing guy who skipped bail. Nothing new about that. Only this time, it leads her to Las Vegas - momentarily. This is because she soon realizes there's a lot more to this case than she thought, and she finds herself in danger once again. Yeah, nothing new there either. However, I found this installment to be more suspenseful than most of the others, and more enjoyable than 'Seven Up' and 'Hard Eight'. This one has totally renewed my faith in the series. Now, if we can only get Janet Evanovich to write more than just one of these a year. 'To the Nines' was a fast and easy read - the perfect "beach book". It hooks you on the first page and doesn't let you go until page 312. Everyone's favorite characters are still here: Morelli and Ranger are still as hot and sexy as ever; Grandma Mazure is still as crazy as ever; Lula is still as hungry as ever; and Stephanie is still just as terrible at bounty hunting as she was in 'One for the Money'. If you've read all the other books in the series, well then you are most likely going to read 'To the Nines'. If you haven't, it can be read as a stand-alone (Evanovich is good at summarizing everything in the beginning, in case any first-timers are reading), but it is way more fun when you've been following these characters since book one. Either way, it's a great book (the best one I've read in quite a while). Just be prepared to postpone everything in your life until you're done.

Published by Thriftbooks.com User , 19 years ago
Anyone who has enjoyed any of the eight previous Stephanie Plum novels would be very foolish to skip this one. If you haven't read any of those, you can safely start with this one . . . but don't expect the earlier ones to be nearly this good.Stephanie Plum, the down home city girl from the Burg in Trenton, continues in her bounty hunter job, and she takes on some pretty unusual ones in To the Nines. As Stephanie describes it, her retrievals have more to do with Lucy Ricardo from I Love Lucy than with Wonder Woman. The book opens with Stephanie and Lula, her sometimes heavyweight sidekick, trying to pick up Punky Blalog. The rest of the escapade has to be read to be believed . . . but Vaseline plays a large role. When she returns to the office, she discovers that her cousin Vinnie faces an enormous embarrassment if he cannot find and bring in one Samuel Singh, a temporary worker from India, for whom Vinnie wrote a visa bond. Vinnie sends Stephanie and her mentor (and sometimes squeeze) Ranger out to find Singh. A major plot line of the book revolves around this search which takes her to Las Vegas before the book is done.A secondary and engrossing plot involves the mystery of who is threatening Stephanie and killing people around her after she has lunch at McDonald's. Because of the threats, Ranger or his men play bodyguard for Stephanie whenever her undercover policeman boyfriend, Joe Morelli, isn't around. In many of the novels, Stephanie goes through cars like tissue paper. In this one, the bodyguards take it on the chin . . . and just about everywhere else.A third and happier plot involves Stephanie and Morelli becoming much closer to one another. A fourth plot focuses on Stephanie's unmarried sister, Valerie, who is nine months pregnant and the family's desire to get Valerie married and out of her parents' house. There's also a fine and funny story line about Lula trying different diets so she can become a super model.On top of these interesting plots and subplots, the mystery is quite engrossing. I had no idea what was really going on until about 60 pages from the end. On top of this, the book is filled with hilarious little scenes featuring the manic members of the Burg, including her man-crazy Grandma Mazur, Morelli's Grandmother Bella who has visions of dead women all the time, the generously endowed Connie Rossolli from Vinnie's office, and even Stephanie's mother who's having trouble coping.The pace of this book is amazing. There's something significant happening on almost every page. The scenes intersect with each other in truly inspired ways. For example, while Stephanie is finishing up her first bounty hunting gig, she gets an emergency call from her Grandmother Mazur. And you'll never guess what the problem is. The result of that scene then cuts into a woman making off-color comments about Stephanie because she seems to have an excess of Vaseline about her. And on it goes. The laughs come almost as fast. I was

Janet, you never disappoint me.

Published by Thriftbooks.com User , 19 years ago
I got to Border's at 9:10 on Tuesday to get the new Stephanie Plum and raced through it. Stephanie's cousin Vinnie has bondedSingh and he's going to lose much money if Singh doesn't show up before his visa expires. As Stephanie tracks down leads, the people surrounding Singh turn up dead...one killed right in front of her. The search takes Steph, Lula, and Caroline to Las Vegas. Will Vegas ever be the same again? Not after a confrontation between Tom Jones and Elvis impersonators brought on by our lovely ladies and a giant pink thong! Flowers and notes from the psycho killer follow Stephanie wherever she goes. The bodyguards that Ranger assigns to protect our heroine are dropping like flies. There are many funny food moments as Lula consumes huge amounts of meat on her new high protein diet (animals are following her everywhere) and Stephanie's sister Valerie, 9 months pregnant, consumes everything in sight. While Evanovich has not departed from laugh-out-loud adventure, 2 things were missing...Stephanie's vehicle did not get demolished and we did not visit the funeral home this time.I do not read this series for the plot, although this one wasa little more intricate that most of the others. I read it forthe zany cast of characters that I have grown to love. P.S. Ranger, come see me sometime...anytime!!!
Trustpilot
Copyright © 2022 Thriftbooks.com Terms of Use | Privacy Policy | Do Not Sell or Share My Personal Information | Accessibility Statement
ThriftBooks® and the ThriftBooks® logo are registered trademarks of Thrift Books Global, LLC