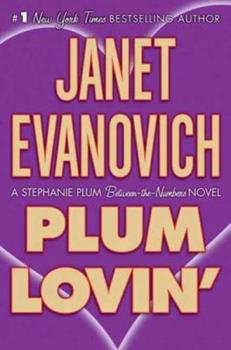 Love is in the air in Trenton, New Jersey and a new year for Stephanie and Lulu and Connie Rosolli has a secret admirer. Or does she? Connie is receiving both love and hate letters. Could they be from the same person, or does she have two stalkers? Stephanie is determined to find out.

delivering between the numbers

Published by Thriftbooks.com User , 15 years ago
I'd be fan number 1,345,983 I'm sure of Evanovich's hilarious series. I was, however, very ginger about picking up any of the 'between the numbers'stuff or the other books (like Metro Girl) that she has written in addition to the main Stephanie Plum series. So. I got bored, picked up Plum Lovin'and was delighted. I read it in a couple of hours and it delivered the expected laughs, and for those like me who are uncommitted to these 'between'books, i believe Evanovich is giving the reader some éxtras'which won't be found in her main series, just family and relationship stuff. For example (spoiler alert) Plum Lovin' resolves the relationship between Stephanie's sister Valerie and her fiancee Albert (Snuggleumpkins) Kloughn. Ranger and Morelli are not featured, but again, Evanovich seems to be setting 13 up with her references to them here: Joe is involved in a deep cover police sting, Ranger is away on secret 'bat business' but does appear briefly to tell Steph he'll be needing her soon. In book number 13 we would surmise. I will definitely be ordering all of Evanovich's work now that I've stuck my toe in out of the main series and would encourage other fans to do the same.

Published by Thriftbooks.com User , 15 years ago
I love her style of writing. I also enjoy the character's spunkiness but I dislike her books being so short winded.

Published by Thriftbooks.com User , 15 years ago
Diesel is the third hunky male in bounty hunter Stephanie Plum's complicated masculine menagerie. Her number one interest --- Trenton, New Jersey cop Joe Morelli --- is away, working undercover while Stephanie dog-sits Bob, his galumphing retriever. Number two is the dangerous Ranger, who occasionally helps Stephanie chase down the hardcore bail-jumpers and performs other undefined activities, some of which drive Morelli crazy. Diesel, the testosterone-charged hunk who first popped up (quite literally) in the Christmastime novella VISIONS OF SUGAR PLUMS, boasts other-worldly skills, among them an apparent ability to walk through walls. He suddenly appears out of thin air in Stephanie's kitchen with an offer she can't refuse. Annie Hart, wanted for armed robbery and assault with a deadly weapon, has vanished. She is the only big-ticket bond-skipping capture between Stephanie and her next rent payment. Diesel tells Stephanie that he has Annie under wraps to protect her from someone who is out to get her for messing up his marriage. Annie, a relationship expert, needs to stay hidden until Diesel can defuse her angry client who belongs to the same mysterious class of near-humans as Diesel. Unlike Diesel, who performs good deeds, this man's specialty skill can seriously incapacitate Annie or anyone who comes into contact with him. Annie will cooperate with the law when Diesel takes care of the bad guy, but will stay hidden only if he will fulfill the romantic wishes of a backlog of her lovelorn clients in time for Valentine's Day, just days away. Diesel, short on personal relationship skills, enlists Stephanie to help him clear Annie's case log. Stephanie is hardly an expert on interpersonal relationships herself, especially with the opposite sex, but Diesel needs help and Stephanie needs the money. They embark on a mission to fix up the five unlikely candidates for romance in time for a happy Valentine's Day for all. Among the lovelorn are a shy butcher, a pudgy veterinarian, an overworked mother of three, a past-her-shelf-date virgin and even Stephanie's very pregnant sister's commitment-shy fiancé. Throw in sidekick Lula and Ranger's bodyguard Tank, and you have a New Jersey lovefest. This leads to a comical exercise in mis-matchmaking and a dicey chase through Trenton's streets, involving Stephanie's family and friends. Only Stephanie Plum could find herself combining bounty hunting with matchmaking. She hones a whole new skillset for her resume in this short, funny, very Evanovich confection just in time for Valentine's Day. --- Reviewed by Roz Shea.

Published by Thriftbooks.com User , 15 years ago
Valentine's Day sucks, usually. But this little gift of a book was better than chocolates and roses. As a Plummette, I have followed this series from One for the Money - and look forward to every word from the world of Plum. Another big sexy guy comes back into Stephanie's life, Diesel. He is stealthy like Ranger only blond, and he has 'spidey' powers. With Joe Morelli undercover, and Ranger going out of town (but when he gets back, they're going to have a talk), Diesel gets Stephanie to help him find people find love from a list from relationship specialist (Annie Hart) who happens to be on Steph's bail skip. To get Annie, Stephanie must help Diesel. This 164 page book is a firecracker and delivers laughs we have come to expect from Evanovich - In fact most scenes are tears running down your cheeks funny - Grandma Mazur just needs to be near to start me laughing and the time with Jeanine puts it over the top! Some loose ends will be tied (again romance in the Plum way)! Stephanie and Diesel play Cupid to some of Jersey's 'finest'. This is a romantic treat to us to get ready for #13 - Is here going to be a trio of men vying for Stephanie? Maybe too much, but I am not complaining!! (I root for Ranger) Diesel has proved to be a great character - Valentine's Day sucks, usually, but I got the best present - I got some Plum Lovin'!!! You'll enjoy it too!

Good for the January blues

Published by Thriftbooks.com User , 15 years ago
What a great after-Christmas gift! I spent the summer of 2006 reading all of the Stephanie Plum books; I can't believe I hadn't discovered them earlier. As my mother, sister, sister-in-law, and I anxiously await the next number novel, this is an excellent Stephanie fix. My only complaint is the shortness of it. All Stephanie fans need to read this Diesel/Stephanie/Lula novella. I don't think you'll be disappointed.
Trustpilot
Copyright © 2022 Thriftbooks.com Terms of Use | Privacy Policy | Do Not Sell or Share My Personal Information | Accessibility Statement
ThriftBooks® and the ThriftBooks® logo are registered trademarks of Thrift Books Global, LLC