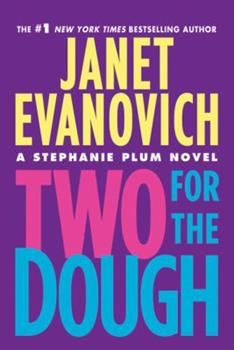 Two for the Dough

(Book #2 in the Stephanie Plum Series)

one of my favorite authors!

Even Better Than The First!

Published by Thriftbooks.com User , 21 years ago
This is a very funny book! Two for the Dough, the second book in the Stephanie Plum series. Stephanie , bounty hunter gets a new case to find Kenny Mancuso who is accused of killing his best friend and jumping bail. Stephanie still is getting help from bounty hunter Ranger and cop Joe Morelli. Kenny is Joe's cousin and he is also looking for him . Grandma Mazur who is a trip helps Stephanie search the funeral homes for Kenny. Grandma Mazur is very funny and she loves going to funeral home's already. Stephanie also agrees to find missing coffins while she is in search of Kenny. This book was funnier then the first it will have you laughing out loud. The pages just seem to fly; it is very fast paced. I can't wait to read the next one, and I would recommend this series to everybody.

This book caused me pain!

Published by Thriftbooks.com User , 22 years ago
Although this book has a great plot, fair play clues to who dun what, and quirky characters galore, it almost did me in. Unfortunately, I read it while recovering from major abdominal surgery and the fire escape saga, followed by the sick dog sequence had me laughing so hard that I literally had to have a shot of morphine...because I laughed until tears ran down my face, the nurse never questioned my pain. The author should print a warning!

Stephanie's Back and Better than Ever

Published by Thriftbooks.com User , 22 years ago
Two for the Dough begins as Stephanie Plum, bounty hunter from hell, is hired to find neighborhood bad boy, Kenny Mancuso, who's accused of killing his best friend and jumping bail. With the help of her mentor, Ranger and vice cop, Joe Morelli, Stephanie's hot on the case, finding a lot more than she expected, including lost army coffins, gunrunners and murderers. This is a fast paced, funny, very witty novel with scenes that will have you laughing out loud. Ms Evanovich brings back her quirky, wacky supporting cast and we get to spend a lot more time with Plum family. The writing is wonderful, down to earth and the irreverent dialogue is unrivaled. In the end Stephanie gets her man, in more ways than one. All of the books in this series are a real treat. Do yourself a favor...start with One for the Money and read them all.

Published by Thriftbooks.com User , 22 years ago
I was just introduced to the Stephanie Plum mysteries, and I haven't enjoyed books so much in a long while. Unfortunately I usually read at night before going to sleep, and have found myself shoving the pillow in my mouth to keep from waking up my husband with my gales of laughter. Grandma Mazur is a hoot and should have her own series. I'll never look at a roast chicken the same way again.
Trustpilot
Copyright © 2022 Thriftbooks.com Terms of Use | Privacy Policy | Do Not Sell or Share My Personal Information | Accessibility Statement
ThriftBooks® and the ThriftBooks® logo are registered trademarks of Thrift Books Global, LLC