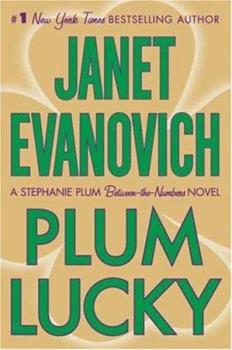 Looking to get lucky?Stephanie Plum is back between-the-numbers and she's looking to get lucky in an Atlantic City hotel room, in a Winnebago, and with a brown-eyed stud who has stolen her heart.Stephanie Plum has a way of attracting danger, lunatics, oddballs, bad luck . . . and mystery men. And no one is more mysterious than the unmentionable Diesel. He's back and hot on the trail of a little man in green pants who's lost a giant bag of money. Problem...

Published by Thriftbooks.com User , 14 years ago
Stephanie Plum is back with the usual funny cast of characters. Grandma Mazur has found a bag full of money and is off to Atlantic City to play the slots. Lula has an offer to be a plus-size model. Diesel is the main man in this book, but Morelli and Ranger make brief appearances too. A leprechaun wannabe talks to animals, a horse is kidnapped, and oh yes, there are some exploding cars. You know, the usual stuff in a Stephanie Plum novel. The action is fast and furious and the laughs just keep coming as this short, between-the-numbers book rolls to a climax. Don't miss it!

Cute in between book

Published by Thriftbooks.com User , 14 years ago
This is a very cute book - it had some guffaw moments to it, but generally it is a great escape book - where we see some of our favorite characters doing crazy stuff. The story takes place about a month after the last in between book - this time is St. Patrick's Day - Grandma Mazur has found a large bag of money, and has gone to Atlantic City to gamble it - Stephanie, Connie, Lula, Diesel (who is featured in the in between books) and a wannabe leprechaun (who found the money) go to find her. Lula is more flamboyant than her normal self - thinking she will become the next plus size supermodel... Some hilarious moments happen when the crew saves an injured racehorse named Doug and transporting him in an RV, then a stint in Stephanie's apartment - We get tweaks of our favorite guys - Joe and Ranger, but that's it - their comments add to the madcap atmosphere though... What we didn't see was Rex - where was Rex - did he go South for the Winter? Do not think the little critter would have enjoyed being alone while Stephanie was in Atlantic City, or having a horse horn into his territory at Stephanie's apartment... The obligatory destruction of Stephanie's current car occurs - It's a cute book - is it the best book? No - But when Grandma Mazur has a bigger role, it always leaves you smiling...

Published by Thriftbooks.com User , 14 years ago
Grandma disappeared. You know it's going to be fun from there. You'll meet old Snuggy O'Connor who believes himself to be an invisible Leprechaun who is able to communicate with animals. Then you'll meet Doug, the racehorse. He is unhappy and needs surgery. Snuggy is unwilling to let Doug's owner give him euthanasia. So he springs Doug and pays for the surgery --- that sets the stage for the story. A great, fun read.

It's all about luck

Published by Thriftbooks.com User , 14 years ago
Statisically speaking, luck has a normal distribution, that is, it has a bell shaped curve. Most people are in the middle with an average amount of luck, but some people are at an extreme point on the curve and are unlucky all the time (like that character in Lil Abner who walked around with a black cloud over his head), and some are at the other end and are lucky all the time. So goes life. It's St. Patrick's Day and there is a rainbow in the air. Grandma Mazur stumbles into a duffle bag full of money - lots of money. She thinks that it is lucky money and hers to keep. Let the good times roll. She is off to Atlantic City. But other people have claims on the money. The story has an interesting cast of characters including an ex-jockey who thinks that he is an invisible leprechaun (he is always lucky, but manages to fumble it away); of course there are Stephi, Lula, and Connie from the bailbonds office; Diesel appears from Stephi's past - another man in her life; a short guy hired by Grandma Mazur; the gangster Delvina; and a horse to add to the adventures and misadventures. Of course there is the money. You will have to read the novel to see how it all shakes out. The novel is not great literature, but is extremely funny. ROFL. Some scenes towards the end had me laughing so hard I had trouble continuing. It is a short novel, and a quick read, at 166 pages with 28 lines per page somewhat widely spaced in easy reading type. It contains what a friend would call earthy language. I would personally classify it as PG-13.

Janet does it again

Published by Thriftbooks.com User , 14 years ago
Plum Lucky is a root beer float kind of book. It bubbles and tickles your nose and makes you laugh. There is not one serious word in this book. I laughed out loud more than once. At our house the reviews are not rated with stars, they get laughing snorts and I give this a 5 snort rating. Joe and Ranger both make cameo appearances and neither cares for Diesel. There is, however, a new male in Steph's life. His name is Doug and he makes quite an impression. If you want angst and social commentary, this isn't your book. If you don't care if you snort when you laugh, go get it right now! Mooch
Trustpilot
Copyright © 2022 Thriftbooks.com Terms of Use | Privacy Policy | Do Not Sell or Share My Personal Information | Accessibility Statement
ThriftBooks® and the ThriftBooks® logo are registered trademarks of Thrift Books Global, LLC