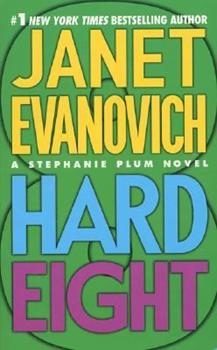 (Book #8 in the Stephanie Plum Series)

Hard Eight "Keeps up Evanovich's standards for over-the-top situations" -Chicago Tribune "[A] must read...readers will want to finish this delightful work in one sitting."--Midwest Book Review "Offers the best action yet."-Newark Star-Ledger "The girl mercenary is as fresh as ever." -People "Hard Eight is most emphatically not Raymond Chandler but, like his work, a piece of finely crafted prose." -San Francisco Chronicle "Plum is one of fiction's...

Hard Eight was fantastic! Just like the 7 before this one. I just ordered 9 thru 12 plus two of the

Published by Thriftbooks.com User , 3 years ago
This girl does some of the most outrageous crazy things, putting her life in danger! She's crazy!!! But that's why I love her so much! And Joe Morelli has finally stepped forward oops don't want to give it away. Every book has been hard to put down! The last one I read, I read in one and a half days! Need more now! Just ordered 6 more.

Stephanie Plum is my hero.....

Published by Thriftbooks.com User , 20 years ago
This book is a FAST READ. It would have been faster, except for the protracted fits of uncontrollable laughter at the situations our girl Stephanie gets herself into.This time out, poor Mable Markowitz, next-door neighbor of Stephanie's parents, has a granddaughter and great-granddaughter who are missing. She turns to Stephanie for help in locating them. Stephanie is up to her ears in bond jumpers, who are more successful in escaping from Stephanie than they are at crime. But when Mable begins to cry, that's when Stephanie breaks down and agrees to try and locate them. In the process, she encounters a psychotic businessman, a bomber bunny and a carload of tarantulas. And that's not the half of it.Stephanie's gloriously loony family are all on hand to add their two cents worth. Ranger is turning up the heat, while helping to keep Stephanie supplied with cars, cellular phones and advice. And Joe Morelli pops up at the scenes of most of Stephanie's personal disasters to lend moral support and sardonic remarks in equal measure. This book kept me chuckling, giggling and groaning deep into the night. Evanovich just keeps getting better at telling Stephanie's story. I hope she never stops.

Published by Thriftbooks.com User , 20 years ago
Janet Evanovich has created a very loveable, bumbling, character in Stephanie Plum. Hard Eight, is the eighth book in her number entitled series about this amateur bounty hunter and her exploits. Stephanie works for her slimy cousin Vinnie as a bond enforcement officer. The idea being she is supposed to earn a living in capturing your run of the mill criminals who haven't fronted up for their court dates. Only Stephanie always has trouble with that part and as a result, usually gets more than a scrape on the knee and has to call for back up. Enter the two male interests that are more than professional, Joe Morelli the Cop and Ranger the Cuban heart throb and renegade bounty hunter.In Hard Eight, Stephanie actually shows some backbone and a little bit of improvement in her law enforcement job skills and it's about time too. It's good to see the action is plentiful, the laughs and one liners are original. Janet Evanovich has finally let Stephanie grow up with her skills and have some luck in life. Considering it has taken eight books for her to improve, from a screaming pair of legs with `Jersey hair' who lives off junk food. This time round, Stephanie's paycheck depends on whether she can catch Eddie Abruzzi. Without getting killed by the ex mobster boss and all around psychopath. Besides trying to make dinner time at her parents house, dodge death callings from Abruzzi, cars exploding, Stephanie has to deal with a few other matters at hand. Her confusion over Ranger her sometimes partner in crime and bounty hunter back up and Joe Morelli's role in her life, and hers in his. Plus there is the added bonus of the disappearance of a child involved in a custody case of a family friend.All the good parts that Evanovich had in her first Plum novel are still here. Rex the hamster and survivor extraordinaire, the grandma from hell - Grandma Murzer, Steph's car issues, the ex-prostitute and Cagney and Lacey wannabe - Lula.Janet Evanovoich has gone all out with Hard Eight, making it a full on novel of action and laughs which is good to see. I felt she got a little mundane in a few of the other Stephanie Plum novels. However, she retains me as an avid fan with this one.I can't wait to see what Ms Evanovich and Ms Plum have install for us in the next two books in this series!

What can I say? I love Stephanie Plum

Published by Thriftbooks.com User , 20 years ago
I know that this series is not where near "great literature," but if you want a good laugh, a little mystery, and a dash of romance, then this series is right for you.In Book 8, bumbling bounty hunter Stephanie Plum is back. She's faking her way through a new case, while trying to lose weight and forget Joe Morelli at the same time.Some people have said this book has a darker theme than the previous seven -- I thought all of those were equally dark (Ramirez stalking Stephanie, Kenny stabbing Grandma Mauzer in the bakery, etc.). This time, Stephanie is searching for a missing mother and daughter -- a case that at first seemed like they were trying to get away from an ex-husband, but then the body count starts rising and Stephanie knows she's in over her head ... again.All of the great characters are back -- Morelli, Ranger, Lula, Grandma Mauzer, Vinnie, Connie, Stephanie's parents, sister and neices, even Bob the dog and Rex the hamster. A few favorites are missing -- Joyce Barnhardt and Mooner, but Janet Evanovich has said she'll be writing them in future novels. I guess Stephanie was too busy "fighting off" Ranger's advances to deal with arch-enemy Joyce. If there was one complaint I had about this book was the fact that when Ranger and Stephanie finally got together, it was too short. My second complaint? We have to wait a year until book 9.

Published by Thriftbooks.com User , 20 years ago
The book is just a bit different from previous Stephanie Plum novels. Stephanie has just moved a bit into the darker side (but so has Spielberg in Minority Report). Stephanie Plum fans will enjoy the book, still has the humor and the fun characters you've come to know and love.New readers looking for mystery will enjoy the story and should appreciate the humor which is far different than any other mystery writer.If you are looking for humor and romance with a touch of mystery in the background....read one of the other seven Stephanie Plum books first.
Trustpilot
Copyright © 2022 Thriftbooks.com Terms of Use | Privacy Policy | Do Not Sell or Share My Personal Information | Accessibility Statement
ThriftBooks® and the ThriftBooks® logo are registered trademarks of Thrift Books Global, LLC