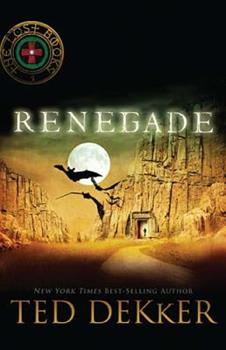 In Renegade, the third in the Lost Books series, a YA spin-off of the New York Times bestselling Circle series, one of the chosen will leave his world . . . and enter ours. One of the chosen has gone renegade. Turning his back on all that he once believed, Billos does the forbidden and enters into a Book of History. He lands in a reality as foreign to him as water is to oil--a place called Paradise, Colorado. He has strange new powers given to him...

Published by Thriftbooks.com User , 14 years ago
This 3rd in the Lost Books of History series is the best yet. Unexpected reverses and entrance into new worlds holds the reader's attention. Dekker never fails to give constant action and characters who touch the heart. Better buy 3 & 4 together, because you won't be able to wait for 4 after finishing 3!

Published by Thriftbooks.com User , 14 years ago
After devouring every savory word of Ted Dekker's Chosen and Infidel, I have anxiously been awaiting the release of the next two installments of the Lost Books series. Renegade begins right where Infidel left off: Billos has just vanished from his world, taking the three Books of History with him. Johnis, Silvie, and Darsal (the other Chosen) are now left wondering not only how to find the fourth book, but also how to track down Billos before he does any more harm. Their journey will lead them deep into the enemy's lair, where one will make a tremendous sacrifice in order to help bring Billos home. Meanwhile, Billos finds himself in the skin between worlds where he goes head to head with the mysterious and ever elusive, Marsuvees Black. Tempted by the dark power Black offers, Billos must now choose whether to fight for truth or give in to his selfish desires. In the end the choice he makes will affect the fate of two worlds and the one he loves the most. In Chosen and Infidel, Dekker started us off on a mind-spinning journey set in the alternate universe he created in his groundbreaking Circle Trilogy. Renegade raises the bar even higher as we are treated to a delightful adventure full of tension, suspense, and wonder. Dekker fans will once again love the tie-ins to his previous works (Showdown, Skin) and the return of Marsuvees Black is a trip to be sure. While there is enough action and intrigue to go around, this story is also about finding redemption in the most unlikely places. Once again Dekker knocks one out of the park as he beautifully sets the stage for Chaos.

Published by Thriftbooks.com User , 14 years ago
Ted Dekker has created another compelling, page-turning adventure that picks up right where "Infidel" left off. In Book 3, Billos struggles in a new world against both evil and his own hubris. Will he see clearly before it's too late for not only him, but Johnnis, Silvia, and Darsal? Readers will not be disappointed by the next installment of the Lost Books series. Just as in our world, the conflict between good and evil permeates the characters' lives and mission, rendering visibility murky when we lose sight of the Giver of the water.

Published by Thriftbooks.com User , 14 years ago
Okay... I've been anticipating the final two books in the Lost Books series ever since I read the first page of Chosen, and now my mind has absorbed each and every word of sheer awesomeness. Renegade is more than a trip, trip, trip. It's a trip and fall, making your mind spin around every bend and curve definitely more than once. Think of Showdown, The Circle Trilogy, and Skin compressed into one book, all your favorite locations, characters, and villains brought back to life in a whole new and unique way. Dekker promises to never let the tension break, and you'll be more than glad that you read this once you're done. I'm already tempted to reread it and I just finished it yesterday.

The Best of the Four

Published by Thriftbooks.com User , 14 years ago
When Billos, touched the cover of one the books of history with blood, a black hole opened and he entered a different reality. Once in that reality, he comes face to face with Marsuvees Black. Black offers Billos the deal of a life time, find and bring the books that crossed to Black and Black will give him incredible power. Drawn by loyalty, Darsal makes a deal with Alucard and binds her life to the books and enters the new reality to rescue Billos. What they discover together will change their lives forever. Renegade was also somewhat slow getting started. With each of the YA books, I've found that they seem to start by going around in circles with a lot of arguing among the recruits and them frustrating Thomas. However, once all the initial scuffles are over, the stories are riveting and pretty much mind blowing. If you want answers in Renegade to the whole book of histories saga, keep reading. There aren't many answers here, just more questions. Typical to Ted's style, he incorporate some great tie ins with other books and some awesome spiritual truths. This book to me is one of his best since White. It's lush with imagery and symbolism. One of the scenes towards the end is reminiscent of a scene in Black. I remember my breath being taken away when I read it in Black, it's just as awsome in Renegade. Truth is the most powerful weapon we possess as Christians and Ted wields that weapon quite effectively. Renegade is once again, another powerful reflection of the reality of us and the reality of God. Belief of God versus believing God. Do we really believe Him, do we really trust Him? Power from the world is an illusion. The only true source is from God alone. And of course, one of my favorites, the love, the choosing and the pursuit of God for each person. So many rich themes. I can not encourage people enough to try this series of books. It's awesome beyond imagination.
Trustpilot
Copyright © 2022 Thriftbooks.com Terms of Use | Privacy Policy | Do Not Sell or Share My Personal Information | Accessibility Statement
ThriftBooks® and the ThriftBooks® logo are registered trademarks of Thrift Books Global, LLC