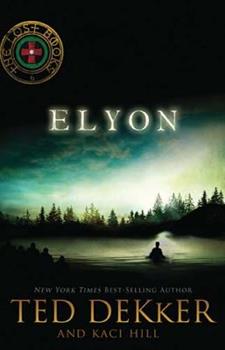 by Ted Dekker and Kaci Hill

Elyon's lakes have turned blood red. Is it a curse . . . or the cure? Shaeda has one blue eye and one purple eye. No one fully knows her story, but her mere gaze eats away at the core of one's being. In his quest for power, Johnis now finds himself in her intoxicating grip. Assumed identities, a magic amulet, the fearsome Shataiki bats, and a troubling alliance with the Dark Priest all converge against the three remaining chosen. Only Elyon knows...

Published by Thriftbooks.com User , 12 years ago
I always enjoy reading Ted Dekker books - they never leave you feeling disappointed. As with all Dekker books this one grips you, and has strong good vs evil themes throughout. Elyon is always exciting and you never know what will happen next. The ending of Elyon is especially intriguing... In summary: Another fine book from a great story teller. With so much Christian fiction out there some gems get lost in the crowd, so, some other Christian books I'd recommend are the time travel adventure 'Godstone' and 'Amrach'. Godstone - The Kairos Boxes Amrach and the Paraclete

Published by Thriftbooks.com User , 12 years ago
I always enjoy reading Ted Dekker books. So exciting and you never know what will happen next.

Welcome to The GREAT ROMANCE!!!

Published by Thriftbooks.com User , 12 years ago
Ok, first, let's say the books together...ready? GO!!! CHOSEN, INFIDEL, RENEGADE, CHAOS, LUNATIC, & last, but not least...ELYON! Yes, these are THE LOST BOOKS. What's that spell, when you take the first letter of each title? CIRCLE! DeKker is amazing! This guy cannot be tamed. So, what exactly does he have in store with a title that bears the name ELYON? The back of it says, "Dive deep with them in this epic conclusion to the Lost Novels-if you dare!" Oh, I dared! With the cliff hanger that LUNATIC threw us, you'd better be prepared with book #6, ELYON. Johnis is seduced by Shaeda, and all because he wants power. Shaeda is a mystery. Shaitaiki bats, evil Priest Sucrow, and the rest of his army want to put a stop to The Circle. Deception is the name of his game, but not everybody plays. Digging into flesh is a luxury for this evil horde, and stopping The Chosen One is a priority! Johnis, Silvie and Darsal, what does Elyon have in store for them? You can guarantee surprises, including one that you see coming, but that's ok. The thing is, this very well may be the end of THE LOST BOOKS. But do you really think this is the end of THE CIRCLE? I wouldn't make that wager anytime soon! This is book #6 of THE LOST BOOKS...Welcome to THE GREAT ROMANCE!!!

Published by Thriftbooks.com User , 13 years ago
The quest continues for control of the Shataiki. Will it be the dark priest Sucrow or Leedhan possessed Johnis? Elyon picks up where Lunatic ended. Darsal is still a slave to Marak with Eylon's command to love the horde. Johnis continues to struggle for control of the Leedhan that now directs his thoughts and actions. The ongoing power struggle between Sucrow and Marak intensifies with both yearning to eliminate the albinos. Is this the end for The Circle? After reading almost thirty Ted Dekker books, I've come to appreciate his writing and have certain expectations. He's written books that I've loved, some that were duds, and others that are average (for him). However, he also has some books that are absolutely incredible and Elyon qualifies as incredible. My favorite Dekker book is White. I don't think there will ever come a point when I'm tired of it. It's simply amazing. Elyon reminded me a lot of White. It had the same intensity, the same passion, the same beautiful portrayal of God. As Elyon progresses, the story falls into utter darkness. Dekker is pretty much a master at setting up dark scenes and contrasting them with God's light. What was slightly different about Elyon is the depth of the darkness. It wasn't just Teelah and the Horde disease's deception, there was the addition of the Leedhan. Shaeda was an excellent addition to this series. Half shatikka, half horde, she was an interesting blend of evil. She was absolutely beautiful, but there was nothing good in her. She wasn't just bent on evil, she was set on domination and revenge. She used her power only to advance her cause. She equated to a demon and as such, she had limits to her control. This was the part that I loved. She could tempt, she could entice, but she could not control Elyon's children. **SPOILER for WHITE** As mentioned earlier, I thought Elyon was similar to White. In most ways it worked, but I would have preferred a little bit more original plot with Darsal. We know from Lunatic, she's commanded to love Marak. There were several instances that were similar to White--the initial repulsiveness, the submitting to slavery, resistance to love, and the scab's slow softening. It was still a good story line, just lost some of its effectiveness because it has already been done. **END SPOILER** The ending of Elyon is rather interesting. I'm not sure if it'll be wrapped up in Green or if we're left to consider this the end or if there are plans to further the series. There's still quite a few questions left and I can definitely see where there is room for more books. However, I was happy with where things left off. It was a strong book and a great conclusion to the series.

Saved the Best for Last

Published by Thriftbooks.com User , 13 years ago
Five years after Elyon's waters have turned red The Circle is on the verge of extinction. The only ones who know of the plot are The Scabs who are behind it, Johnis, Silvie, and Darsal. Johnis and Silvie have been fighting a war they are ultimately losing, while a newly drowned Darsal has been sent on an impossible mission to love the unlovable. In the background a sinister evil lurks, pulling all the strings and devising a plan that will annihilate the Horde as well as The Circle. Hope can only be found at the bottom of Elyon's red water, and it's up to Darsal to convince those she loves to dive in and drown. Ted Dekker and Kaci Hill have done just what we hoped they would: they've saved the best for last. Elyon is everything I wanted in a finale complete with relentless action, gut wrenching tension, and stirring emotion all leading up to a powerhouse conclusion. Dekker has long proven that he knows how to end a story and from the opening lines we know that we are in for another treat. Again, I was captivated by Darsal in this story as she struggles with the overwhelming task of doing the unthinkable and figuring out a way to save her friends. The villains are nastier than ever here making the journey that much more riveting and wonderfully excruciating. Pacing is everything in a series like this, and I challenge anyone to stop reading during the final act of Elyon. Not only has Dekker solidified his standing as storyteller extraordinaire, but he has introduced his fans to the talented writing of Kaci Hill. Together they shine as they give hungry fans exactly what they wanted and more. In the end...well, let's just say the end has Dekker written all over it. This one is sure to have long time fans foaming at the mouth in anticipation for the highly anticipated beginning and end to The Circle Series, Green.
Trustpilot
Copyright © 2022 Thriftbooks.com Terms of Use | Privacy Policy | Do Not Sell or Share My Personal Information | Accessibility Statement
ThriftBooks® and the ThriftBooks® logo are registered trademarks of Thrift Books Global, LLC