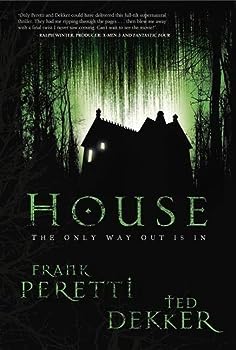 (Part of the Books of History Chronicles Series)

Published by Katelynxo , 1 year ago
This is such a thriller! It's as good if not better than any Stephen King book.

Published by mj2 , 3 years ago
After reading Peretti's "This Present Darkness" and "Piercing the Darkness" I was expecting the same good and evil spirits to reign in the "House." There were certainly odd, new characters who gave a chilling feeling throughout the book. One of those books that you keep trying to figure out what is going to happen next. A good read.

Published by Thriftbooks.com User , 16 years ago
I still remember the first time I saw House being advertised. I was ecstatic! Now, post printing, I find that I was not dissapointed. Story Premise: 2 couples are trapped within the Wayside Inn, a quaint little place where they hoped to rest for the night. Instead, they are forced to play the horrendous game of Barsidious White. Three rules: 1) God came to my house, and I killed him. 2) I will kill anyone who comes to my house, as I killed God. 3) GIve me one dead body, and I might let rule 2 slide. Game ends at dawn. As an avid reader of both Peretti and Dekker, I had high expectations of this book. Thes expectations were completely fulfilled. The spiritual insight offered in this story is so profound, I still find myself thinking about it several months after my initial read. I did not find the "gross" factor of the book to be overwhelming either. In fact, I thought that it was quite less then some of Dekker's previous books. Just enough to keep the story going, and never more then necessary. I would easily go back and re-read it again, because the spiritual significance is so well founded that, to me, it never grows old. I highly recommend it.

Published by Thriftbooks.com User , 16 years ago
I have been waiting for this book for months and it finally came. It was not a letdown at all in fact it was better than I expected it to be. I don't see how people can think that this was a horrible boring book with no character development. It was the total opposite. First let me give you my history of Ted Dekker and Frank Peretti. I read three peretti books and they were all very good. His books are more blatantly christian (not a bad thing), his books are almost always supernatural thrillers. Other than that I could not get into any of his works. They were different and un-exiting. And his recent effort Monster was very disappointing in my opinion. Now Ted Dekker I love. Although I have only read two of his books but they have been really good. One thing I like about him is that if you are not a Christian you can read it like a good thriller, but as a Christian you can get a deeper meaning. Christianity is in undertones. Dekker writes more suspense thrillers like Dean Koontz. So you can imagine the combination. While I heard because of personality differences they had a hard time writing it, the book turns out to a mix which makes an amazing unique story. The book is in the genre of horror. Weird cops, popped tires, creppy hotel owners including a perverted retarded boy, a demented serial killer, 4 people trapped inside a house, a catacomb basement, and having to kill someone to stay alive. When everything is revealed everything makes more sense and I believe there were a couple twists. In some scenes you could tell if Peretti of Dekker wrote it. Each scene was either both put together or one of them. Overall this book was great and very fast paced, while developing the characters. You become very attached to some of them, while others you hope will die. You slowly find out there pasts and sins which make them come alive even more. It is an exiting ride and I advise you to take it.

Published by Thriftbooks.com User , 16 years ago
The "House" reader is handed a seemingly unwinnable game with 4 main characters that almost everyone can identify with. The only problem is this is a very serious game, and for three of the characters to win, one of them must die. Otherwise, they all die. And the clock is ticking. This is my first Ted Dekker novel, but it won't be the last. Dekker and Frank Peretti have woven a script which is a combination of film noir, and the horror movies of my childhood. It reminds me of Stephen King, with the exception that Dekker takes the high road when it comes to language and sexual situations. While some might say this makes the story less realistic, to me it makes the reader use his brain more. What happens, or doesn't happen between the lines is up to you. I won't give away the ending, except to say no matter what your station in life, you will do some serious personal reflecting. I have a sneaking suspicion that is what Ted Dekker and Frank Peretti were aiming for all along.

Published by Thriftbooks.com User , 16 years ago
I had no idea what to expect with this collaberation and I can't say how pleased I am. As a major Stephen King fan I LOVED this book. The twists were perfect and there's a huge reversal near the end that I didn't see coming. A fantastic look at the human heart because it's so daring and for that reason, refreshing. I read this novel in six straight hours. I suppose if you're not into intense and at times somewhat disturbing fiction, you might find this book a little much, but I thought it hit the nail on the head. Kept me glued to the pages. Highly recommended!

Published by Thriftbooks.com User , 16 years ago
I cannot say enough good things about this book. I consider myself an avid reader and I enjoy a great suspenseful horror fiction like the next person and House is a must for any horror fiction fan. House is considered a Christian fiction novel, but I feel it doesn't matter whether you are a Christian or not; this book will captivate readers of all shapes, sizes and beliefs. If you are looking for a book that will keep you up at night and yet offers hope at some point, then House is a must read for you. My words will never suffice how spectacular this book is, so go out and get this book for yourself. But don't forget to lock the windows and doors and whatever you do... stay out of the basement. For a full review of House go to http://www.1340mag.com/book_reviews/view.php?review_no=61
Trustpilot
Copyright © 2022 Thriftbooks.com Terms of Use | Privacy Policy | Do Not Sell or Share My Personal Information | Accessibility Statement
ThriftBooks® and the ThriftBooks® logo are registered trademarks of Thrift Books Global, LLC