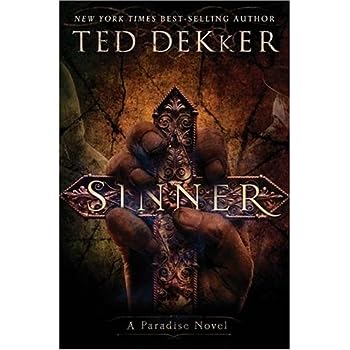 Full of mystery, intrigue, and mind-blowing twists, Sinner explores what happens when the idea of tolerance leads to intolerance. Some say roll with the punches. Drift with the tide. Nothing can stop... This description may be from another edition of this product.

Published by Thriftbooks.com User , 12 years ago
In his thriller Sinner, Ted Dekker sticks to what he does best: challenging the reader of what they know to be good vs. evil. Shining the light on the truth the story leads 3000 believers to a hole of a city called Paradise where the light battles the darkness in the ultimate showdown. This novel is frightenly relevant to what is happening not only in todays world but in our very neighborhoods. Will you be part of the 3000? I know I will!

Published by Thriftbooks.com User , 13 years ago
Sinner by Ted Dekker is one of Dekker's best novels, but it isn't the best. I highly recommend it only if you've already read Showdown and Saint, but don't read it first even though Dekker says you can read this series out of order. The ending can be a little disappointing but overall its one of his best and is in my circle of favorite books. It's a great chance to read and think about truth in your life and question how faithful you really are to God. Even if you don't believe in God that much, its still a really good read. Once you pick it up, its extremely hard to put back down.

Sinner - the best of thr trilogy

Published by Thriftbooks.com User , 13 years ago
This is one of Dekker's finest works! The underlying concept is amazing. Appropriate for all ages and walks of life. A must read. Can be read as a stand alone, but is best understood by reading Showdown, the Saint, and finally Sinner.

Published by Thriftbooks.com User , 13 years ago
In the past where hate has destroyed, we're now facing a time when tolerance will destroy. Want a glimpse of our country where tolerance rules? Read Sinner. The third book in the Paradise series is by far Ted Dekker's most outspoken book. The time is coming when saying Jesus is the only way to salvation will be considered a hate crime. Sinner explores the path of tolerance and the very real ramifications it holds for Christians If you've read Showdown and Saint, you're familiar with project Showdown and the effects it had on three young children--Billy, Darcy, and Johnny. All three were given special abilities through the books of history to change the world. Saint is Johnny's story. Sinner is Billy and Darcy's. Imagine what could be accomplished with Billy's ability to read people's thoughts, Darcy's persuasive speech, and Johnny's truth. They could literally change the world and that's exactly what they do. The question is, Is America better or worse? More peaceful or just suppressed? Tolerance is obviously an issue very close to Dekker's heart. He's written a couple of blogs and a children's book (The Drummer Boy) on the issue. While I've always considered him outspoken on his website, I've never considered any of his books particularly bold or political (Blink is a possible exception). If anything, he's leaned towards wooing people with subtlety and gentleness and at times, I have wanted him to push further. The gloves have come off in Sinner. It is the culmination of a journey that's taken the reader to some pretty dark places. There are many angles Ted could have taken with Sinner, but he takes the path that will directly affect all true followers of Christ. Rather than focusing on the practices of Christians, Dekker skips to the heart of Christianity and look at what would happen if we lost our freedom to teach Jesus as the only means to salvation. Virtually eliminating all forms of evangelism and ripping out the heart of Christ's teaching. While tolerance is the focus of Sinner, probably more than any other of his other books, Ted directly and clearly states the gospel of Christ. It's stated, restated, and quoted directly from John chapter 1. Dekker didn't let us off the hook with just understanding Jesus' message, he pushes us further to accept our own sinfulness. The darkness we're born into and that which we create and live in. The darkness we don't really want to leave and that which we want to flee. Dekker added another layer to this story that is one of its most powerful elements. Sometimes the darkness is hiding in the light. Not a lot of loose ends seemed to be tied up in Sinner. I felt like our time in Paradise might have ended, but I'm not sure that's all of Billy, Darcy, and Johnny. We might get to read about them again. While I won't say Sinner is my favorite Ted Dekker novel, I do believe it's one of his most powerful. This is not a book that requires a lot of looking beneath the

The best Dekker novel yet! Awesome!

Published by Thriftbooks.com User , 13 years ago
Mr. Dekker, kudos to you. What a book. This is part of the Paradise novels trilogy, the final novel, but it can be easily read as a stand alone novel. I have read all of Ted Dekker's novels, including the circle trilogy, the lost books, and these paradise novels. I believe that this book is above and beyond all his others, and I love all the others. Sinner is gritty, suspenseful, and the classic bout of good vs. evil. It made me want to re-read it the minute I finished the last page because I didn't want it to be over. Get this novel and make sure you have nothing planned for the rest of the day one you start it because you simply cannot put this book down.
Trustpilot
Copyright © 2022 Thriftbooks.com Terms of Use | Privacy Policy | Do Not Sell or Share My Personal Information | Accessibility Statement
ThriftBooks® and the ThriftBooks® logo are registered trademarks of Thrift Books Global, LLC