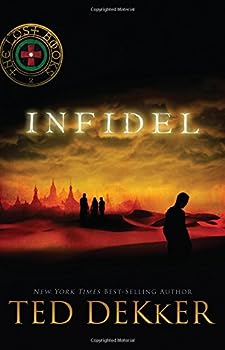 From Chosen to Traitor? After being stretched to their limits, the four heroic young Forest Guard recruits--Johnis, Silvie, Billos, and Darsal--face new dangers on their mission to secure the seven... This description may be from another edition of this product.

Published by Thriftbooks.com User , 14 years ago
Dekker's sense of pacing is never clearer than in the Lost Books. He has taken the Other World that was explored in the Circle Trilogy and turned it into the setting for continued cataclysmic conflicts between good and evil, between the Forest Guard and the Horde. "Chosen" left us with a solid ending and a defined objective for the main characters. "Infidel" picks up right where the other left off, but Dekker leaves us little time for catching our breath. Johnis, the central character of the first book, is once again on a mission--an ill-advised trek that will land him in a heap of trouble. Followed by Silvie, he endangers lives and loses all that he has obtained in a quest to rescue his mother, whom he believes to be alive. Despite the meager map details on the book's inside cover, "Infidel" leads us into a world that is well thought out and that parallels our own. Dekker has imbued these settings with detail and symbolic depth, and he challenges us to love even those we find abhorrent. Johnis is a rich character, with believable conflicts and transformations. The book's message of Christ-like love is clear, while never being preachy. One or two of the scenes near the end seemed a bit convenient, but overall the pace and action never flags, and I look forward to continuing this great series. The book ends with a perfect jumping off point into further adventures, raising the stakes, the conflict, and the possibilities.

Published by Thriftbooks.com User , 14 years ago
I am a big Dekker fan so it should be no surprise that I loved this very easy to read book. It is a "youth fiction" but is a good companion to the Circle Trilogy.

Good, but I liked the first better.

Published by Thriftbooks.com User , 14 years ago
I read this in a day, even though this book annoyed me more than the first(Chosen). I won't say why except that a certain character was annoying me. But in the end, you understand why Dekker did what he did with the character. If you like Dekker's books, or fast paced adventure/fantasy books, you'll love these. For me, it was good, but not as good as the first. Read Black, Red, White, and Chosen before this.

The Tie That Binds

Published by Thriftbooks.com User , 14 years ago
I received both Infidel and Chosen (bk. 1 of the series) in the mail at noon. I finished reading them (yeah, both) at 6:00. I couldn't put them down. This series is the tie that binds the Circle Trilogy (Black, Red, White) to Dekker's other works. Ted is a master at cliffhangers and totally unexpected twists and now he's taken it to a whole new level by interweaving storylines over multiple books. It's absolutely awesome. If Dekker keeps up this pace throughout the Books of History Chronicles, it will be on par with C.S. Lewis' Chronicles of Narnia and J.R.R. Tolkien's Lord of the Rings.

Published by Thriftbooks.com User , 14 years ago
Johnis, Silvie, Darsal, and Billos continue on their quest in this second installment of Ted Dekker's Circle Series. Having just helped the Forest Guard thwart a major Horde attack, they now find themselves settling into their new leadership roles. Johnis soon learns that his missing mother might be living as a prisoner among the Horde. Despite his promise to seek out the hidden Books of History, Johnis decides to follow his heart back into danger and find a way to save his mother. Soon Johnis and Silvie embark on a dangerous mission that may just put the future of Elyon's followers in jeopardy. Ted Dekker has crafted another remarkable story full of heart, suspense, and action. Infidel takes us deeper inside the veiled world of the Horde, and what Johnis and company discover about their enemies is surprising and eye-opening. At its core, this is a story about compassion, acceptance, and honor. The insights into humanity that Johnis experiences are compelling and his inner battle of duty vs. compassion is incredibly captivating. Dekker is known for plots full of unexpected twists and turns, and his hard core fans will not be disappointed. Infidel is full of fascinating characters, beautiful and vivid landscapes, and gut wrenching battles. However, Dekker's major strength is clearly found in his ability to persistently entertain on a high level while causing readers to think and question. This new young adult series is a fresh and exciting addition to the world of Ted Dekker.
Trustpilot
Copyright © 2022 Thriftbooks.com Terms of Use | Privacy Policy | Do Not Sell or Share My Personal Information | Accessibility Statement
ThriftBooks® and the ThriftBooks® logo are registered trademarks of Thrift Books Global, LLC