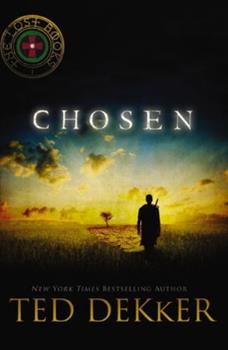 The first in the Lost Books series, a YA spin-off of the New York Times bestselling Circle series, Chosen sets four teens on a quest to save their world . . . and ours. Think with your heart and prepare to die . . . for you have been Chosen. Thomas Hunter, supreme commander of the Forest Guard, has seen a great evil decimate much of his beautiful world. With a dwindling army and an epic threat, Thomas is forced to supplement his fighters with new...

Back To The Future

Published by Thriftbooks.com User , 14 years ago
Ted Dekker is a machine. He's been pumping out book after book, and doesn't show any sign of slowing down for the 2008 book-selling year. Released simultaneously with the second book in the series, "CHOSEN" jumps in where Dekker left off with his Circle Trilogy. The story centers around Johnis, a just-barely sixteen year old who wants to be part of the Forest Guard, the fighters that protect the forests from the desert-dwelling Horde army, but can't because he's been elimanted from qualifying. Through quite the sequence of events (albeit a football game of sorts), Johnis ends up in the Forest Guard, and is immediately thrown into a crazy adventure that will take him into the heart of darkness itself. Creepy monsters, visions, and the search for seven mysterious books makes this one of Dekker's most fantastical stories yet. The writing here is good. Very good. And things move along very quickly. The only interesting thing to note is that while this has been marketed for youth, readers who have not read the Circle Trilogy (marketed for adults) will most likely be a little confused on some story points. (Maybe that's why Dekker put out those graphic novels of the trilogy in the fall...?) There are even some very interesting tie-ins to the rest of the Dekker universe which will be very intriguing for long-time fans, but will likely not shed much light on things. All in all, this is very likely to please the young fantasy crowd it's been aimed at. And while at times some readers may too obviously see the message Dekker is dishing out here, it will still entertain and inspire. Definitely worth your day to read.

Dekker in his element

Published by Thriftbooks.com User , 14 years ago
Can four teenagers really save humanity if they throw everything to the wind to follow their hearts? Johnis believes so. And so does Thomas Hunter, supreme commander of the Forest Guard. It's been thirteen years since the Colored Forests gave way to desert. Elyon's followers now live in seven scattered forests, each forest containing a lake of life-giving water which the forest dwellers depend on to fight off the dreaded skin disease of the Horde. But the skin disease isn't the only danger Elyon's chosen people face. The Horde army is now 400,000 strong. Word has reached Thomas Hunter that the Horde plans to attack from the east in four days time. With only 20,000 eligible Forest Guard fighters left, Thomas is forced to lower the recruiting age from eighteen to sixteen in order to boost the Guard's ranks. Of the new recruits, four are hand picked by Thomas to become squad leaders. Before Johnis, Darsal, Billos, and Silvie can receive their commission, they must undertake one final test. Thomas sends them on a mission that takes them to the edge of the desert on the west side of the forest, but it soon becomes clear to Johnis that the west is not as safe from the Horde as Thomas thought. Johnis must make an agonizing choice when he unexpectedly meets with creatures long deemed as legend. Can he really turn his back on Thomas and the Forest Guard to follow his heart? Can he convince Silvie, Darsal, and Billos to follow him deeper into the desert in search of the six missing Books of History while keeping their mission a secret from everyone, including Thomas? The answer to these questions can be found in the pages of Chosen, book #1 of Ted Dekker's new Circle Series. Building on his successful Circle Trilogy, Dekker reintroduces readers to the world they came to love in Black, Red, and White. The battle between good and evil continues as Elyon's chosen are pitted against the Horde and the Shakaiki once again. The lovable Roush, who remain committed to helping and guiding the forest dwellers, also reappear. Although the Circle Series will be marketed as Young Adult novels, older readers need not worry. Dekker is in his element with this new tale. His talent for creating memorable characters and alternate realities merge to make Chosen a book that will appeal to all ages. The main characters in this series may be teenagers, but their struggles are timeless and universal. Forest life has forced them to enter adulthood earlier than today's society. Not only is sixteen marriageable age, but now they are required to protect their villages in combat. Their decisions will shape their future, and that of all humanity. Their story explores themes which include following your heart, the search for truth, and yes, the enduring battle between good and evil. Already acquainted with Dekker's alternate reality? Your mission is to journey forward from the Circle Trilogy and embrace the continuing battle unfolding against the Dark One. Unfamiliar with R

A Career of New Colors

Published by Thriftbooks.com User , 14 years ago
Just when we thought we knew where Ted was headed in his career, just when we were ready to pigeonhole him, he breaks out with another fantastic series. This is not a cheap spin-off of the Circle Trilogy, or another way to cash in on that series' success. This is great storytelling. The story introduces us to Johnis, a young man who is still trying to understand his place in the Forest Guard. He knows his community is threatened by the nearby Horde, but he and the others have lost their deeper understanding of the good and evil forces that encircle them. They've become lackadaisical in the thirteen years since the Circle Trilogy ended, and they follow their leader Thomas based mostly upon the old stories. Soon, Johnis and three partners are thrust into a battle for their very lives, racing to fulfill an assignment from Thomas, while also fighting off the bat-winged Shataiki. Johnis is given his own specific quest, and he is forced to either rise above his own limitations or fall prey to his youth and inexperience. I discovered Ted's writing at the beginning of his relatively short, but prolific, career. I still think "When Heaven Weeps" is one of the best Christian novels out there, and "Thr3e" broke barriers in the market. When he wrote the Circle Trilogy, we had only hints at the larger mythos he was creating, one which ties together his last ten books or so. While I loved the allegory and depth of "Showdown," I found "Saint" and "Skin" to be more movie-script oriented--not bad, just different. "Chosen" is a return to the deeper exploration that I've come to expect from Ted's stories. Despite being immensely readable and aimed at the YA audience, this is a story older readers can also enjoy for its fantasy elements and for the spiritual ideas that ring throughout. I'm anxious now to read "Infidel." And if these are any indication, "Adam," his next full-length novel should rank among his best.

A Superb Beginning to a Great New Series

Published by Thriftbooks.com User , 14 years ago
It's been thirteen years since the evil Teeleh has laid waste to the beauty of Elyon's creation. The Horde roams the desert-filled earth seeking to destroy the followers of Elyon that remain. Thomas Hunter is the commander of the Forest Guard, warriors who have given their lives in service to Elyon and fellow believers. The Horde greatly outnumbers the Forest Guard, and Thomas is reluctantly forced to encourage sixteen and seventeen year olds to fight. Out of this group four have been chosen by Thomas himself as special leaders: Johnis, Silvie, Darsal, and Billos. These new recruits are sent on one last training mission to prove their worth to Thomas and the Guard. They soon discover there is an even greater mission in store for them, and the survival of Elyon's followers depends on their success. They must seek out and collect the legendary Books of History before they fall into evil hands. Along the way Johnis discovers that not only was he born to lead, but his destiny is greater than he could have ever imagined. Ted Dekker is one of the most prolific and successful CBA authors to date, and with the beginning of this great new series he only continues to elevate his status. Chosen is an extraordinary tale that builds upon the unforgettable world Dekker created in Black, Red, and White. Adventure, action, and suspense abound, and the world and characters of Elyon are rich and skillfully fashioned. The subtle connections to Dekker's previous works are a clever and fun addition to the enjoyment. Chosen is being marketed as Young Adult Fiction, but young and old alike will enjoy this latest offering. Dekker fans will love this new story from the Circle universe and new readers will undoubtedly be sucked in to the greatness that is Ted Dekker. This is a superb beginning to what is sure to be a fantastic series.
Trustpilot
Copyright © 2022 Thriftbooks.com Terms of Use | Privacy Policy | Do Not Sell or Share My Personal Information | Accessibility Statement
ThriftBooks® and the ThriftBooks® logo are registered trademarks of Thrift Books Global, LLC