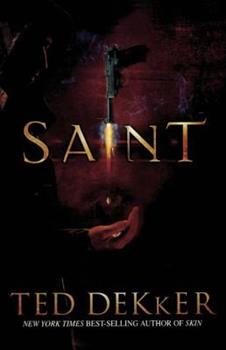 "We call you Saint." The name ignited a light in Carl's mind. Saint. He'd been covertly recruited for Black Ops and given his life to the most brutal kind of training any man or woman could endure. He was here because he belonged here. To the X Group. An assasin. The most effective killer in the world. And yet . . . Carl Strople struggles to retain fleeting memories that betray an even more ominous reality. He's been told part of the truth--but what's...

Immersive storyline and compelling characters. One of the best suspense stories I have ever read.

Published by Thriftbooks.com User , 4 years ago
Immersive storyline and compelling characters. One of the best suspense stories I have ever read. This was my first Ted Dekker book, and I rate him as one of the top five authors I have ever read. I have read 100 to 200 books a year for the past 50 years, and this book I would rate as in the top 50 of my lifetime. Highly recommended, just not for younger readers.

Just One More Chapter Before I Sleep

Published by Thriftbooks.com User , 15 years ago
I was planning to read Saint over a weekend, but I couldn't seem to put the book down. Like Ted Dekker's other books, Saint is more non-stop action with twists and turns, heavily laced with emotional undercurrent than a leisurely read that I could bookmark after a few pages. Ted has that wonderful ability to draw a reader into the story he's telling - causing me to promise myself, "just one more chapter, then when things settle down a little in the story line, I'll put this book down and get some sleep." I'd like to thank Ted Dekker for another book that was well worth the next-day yawns from lack of sleep.

Published by Thriftbooks.com User , 15 years ago
I've been wondering for the longest time if Dekker would ever come out with something to match the intensity of THR3E. I mean, he's really... REALLY going to have to be locked and loaded to beat the caliber of THR3E, and that's just how it is. But upon picking this up, it sucked me right in, quick, but not quite quicker than THR3E. I believe that Dekker intended for this to not just be a page turner, but to play with the mind, even more so than he does with most of his work! Most of his work is bar none 5 star material, and "Saint" comes from out of the shadows and exceeds a lot of expectations. So you meet a man focused, and a man who succeeds at his every objective. Carl is a trained killer, and he doesn't even know his own identity. He doesn't know who Kelly really is, yet he has killer instinct to the max! His is part of The X Group, and there are very few of them. He knows that he doesn't like Englishman. Englishman is a threat, and he very well may be born of black, but never mind that for now. Carl may want to kill the President of the United States. His journey will take him to many places. From Hungary, to New York, maybe even to Colorado, who knows! He's on a mission, and he just may find out who he really is. So how did Dekker do it again? Hey, it's Ted Dekker!! That's how. He's kind of like Dean Koontz, you don't dare question the man. That's how good he is. If he chooses intense action, there you go. A hint of romance? Hey, no problem! If Ted Dekker wants his work to put on 4 ounce boxing gloves and knock you on your back, that's what will happen! Hey, the back of this states that he may want to kill YOU, so do you REALLY want to pick this up? WILL YOU upon reading the final page of this Dekker mastermind survive this encounter? Just remember that you won't be prepared for this. Ok? Remember that. Now YOU may begin the journey!

Published by Thriftbooks.com User , 15 years ago
Somehow, someway Ted Dekker continues to please and surprise his growing fans base - Saint is no exception. The tagline for the thriller is "Saint...He's not who you think." That statement could not be any truer. Going into this book, neither you or Carl Strople "Saint" have any idea who he is really. The thing that makes Dekker's books so amazing to read, the twists and turns, making it equally difficult to review. Much of the plot revolves around the surprising revelation of Carl's identity. To avoid spoiling any of the amazing surprises Dekker has in store for readers, I can only give vague statements about specifics in the book. But I cannot praise the novel (and Dekker) enough. The novel is able to effectively and dramatically combine the spy, thriller, and supernatural genre flawlessly, not to mention some romantic moments as well. Anyone who has read any of Dekker's novel will want to get his latest. Specifically, if you enjoyed Showdown, you will love Saint. But one of the most amazing things about Dekker's recent works is that while he is able to connect each of the novels, the average reader can pick up Saint knowing nothing about any previous book and enjoy it. What sets Dekker apart from most other writers today, is his thought provoking nature. After I finished Saint, I went back and tried to make all the connections. I lay in bed awake for 30 minutes running through the characters that had become so real to me. I wanted to know what happened to them next. I wanted to know what happened to them in the periods I didn't read about. I was hungry for a sequel and prequel. That to me makes Dekker one of the most gifted writers alive. That and the fact that I got the book home Saturday around 2:00 and had finished it before 9:00 that night. The highest compliment I can give a writer is that they make me want to write. They encourage me to get my ideas and thoughts down onto paper. Not only does Dekker inspire me to write for the sake of writing, but I want to get my stories down before he publishes all the good ideas. Read Saint and then like me, you will be dying with anticipation for Skin which comes out in April 2007.
Trustpilot
Copyright © 2022 Thriftbooks.com Terms of Use | Privacy Policy | Do Not Sell or Share My Personal Information | Accessibility Statement
ThriftBooks® and the ThriftBooks® logo are registered trademarks of Thrift Books Global, LLC