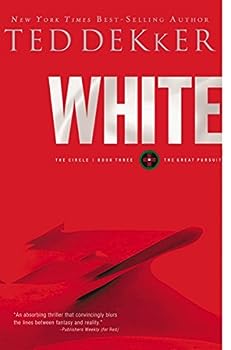 Time Is Running Out In Two Realities. In one world, a lethal virus threatens to destroy all life as scientists and governments scramble to find an antidote. In the other, a forbidden love could... This description may be from another edition of this product.

Published by Thriftbooks.com User , 16 years ago
White by Ted Dekker is the 3rd and final installment of the Circle Trilogy. It continues with Thomas Hunter seeking away to save this Earth from the Raison Strain. The beauty of this book comes from the other Earth. While this Earth is quickly falling into disarray from the disease, Thomas of Hunter is involved with the Great Pursuit of Elyon. That is drawing the Horde into the Circle, to become Elyon's Bride. Will he have to give his life in that Pursuit, just as Elyon Himself had to do? Our will he survive? How does our Earth fare in the end from the Raison Strain? Is there any hope for an anti-virus? At what cost to the nations? What would be the ultimate cost in this battle against time and a madman, set on destroying all? In this book, Ted Dekker weaves a tale of great sacrifice, a sacrifice for love. Thomas meets a young woman by the name of Chelise, the daughter of General Qurong of the Horde. This woman captures his heart, which should not happen between those of the Circle and the Horde. She is one that has forsaken the Great Romance of Elyon and believed a lie. Yet, Thomas is taken by her. He does everything within his power to woo her, to cause her to see that she is loved by Elyon. Will he succeed? The cost of rescuing the General's daughter is his life, and if she follows after him, it will cost her life as well. Dive Deep, and Live! Again, this is a masterfully written book. In it we see a great example of 2nd Corinthians 5:11-19. It beautifully shows the ministry that we as Christians have been given, the ministry of reconciliation. We were reconciled to God by Christ Jesus, and we have been called to reconcile man to Christ. The Great Pursuit of Elyon is all about this. Our God desires fellowship with His Creation, yet those that have pursued after there own desires have no understanding of this Love. We are called to give up our life for the sake of winning the lost. The word Martyr actually means Witness. In this book, you will see that put in action in every way. I have walked away from this series inspired to love more, to walk in remembrance of the great sacrifice Christ made for me, and what He has called me to do. I am still in awe of how this story overcame the barriers that so often come with preaching about love and sharing our faith. In a story, the truth comes through so much stronger and we are more willing to accept it. By the way, in case you didn't know, Elyon is a name for God. It is Hebrew for The Most High God.

Published by Thriftbooks.com User , 16 years ago
It's been about 2 weeks since Thomas Hunter woke up with knowledge of a potentially world-ending deadly virus strain. Although he was unable to stop the release of the deadly virus, he has been very busy helping to look for a cure. At the same time, it has been over 16 years since Thomas of Hunter woke up in the Black Forest with knowledge of the Histories. Although he was unable to stop the disease-ridden Horde from overrunning the forests, he has been very busy helping those who want a cure to the disease to get it. Both worlds are going to hell in a handbasket, and it's up to Thomas Hunter to figure out how to keep that from happening. This third and final installment in the Circle Trilogy may be one of Ted Dekker's best ever. His ability to pull you into the story and then throw you for loop after loop will leave you breathless and eager to continue. I lost quite a few hours of sleep because I couldn't find a good stopping place. As with the first two, this book is an unabashed Christian work. In addition to a gripping story, it also contains a retelling of the Bible. While you may not always agree with how the story has been rewritten, the main concepts are there. Not only will you be on the edge of your seat while reading this book, but your mind will be reading and understanding as well. If you have not read "Black" or "Red" first, then "White" will not mean anything to you. Some people will be upset that they have to buy three books to read the whole story, but this is one trilogy that is worth it.

Published by Thriftbooks.com User , 17 years ago
All the things I love all in one place ~ Spirituality ~ Science Fiction ~ Time Travel/Alternate Reality combined with Romance, Suspense and Intrigue. What a series! I was lucky to read all three books at once without having to wait. I zoomed through them and was very pleased with the ending as sad as I was to see it. Ted Dekker has an incredible gift of going where no one has ever been and taking you with him. I am a new fan and highly recommend this book. Be sure and start with "Black" first!

Great Conclusion - But Read them in Order

Published by Thriftbooks.com User , 17 years ago
This is the third book of a trilogy. Read the first two: Black and Red before going into this one. Thoman Hunter lives in a world where a lethal virus threatens to destroy humanity. Then he goes to sleep as we all do. When he wakes he is in a world where he is involved in the struggle for peace and religious freedom. When he goes to sleep in this world, he wakes back in the first one. Each time he wakes he encounters a crisis until he is unsure just which world is real and which is dream. Or are they both real, or both dreams. It's a fascinating concept, very well executed and highly recommended.

Published by Thriftbooks.com User , 17 years ago
The mind-bending story continues in White, the final book in the Circle Trilogy. Dead in our world but alive in the other reality, Thomas and those that escaped to follow Justin now live in the desert. Those that have drowned in the red lakes and put their trust in Justin and Elyon are free from the disease that still afflicts the Scabs. They are still hated by the Horde and the Scabs continue to try to kill Thomas. In our reality, the virus has been spread throughout the entire world. Using her brother's blood sample, Kara Hunter crosses over to the other reality where she shares minds with Mikil, Thomas's second in command. Like in the other two books, White is filled with unexpected twists. The story is incredible and almost believable in an amazing way. After reading White, I have to say this is one of the best series I have ever read. Every time I thought I had it figured out there was a new twist and I was left guessing again. Make sure you have plenty of time before you start this book because yet again Ted Dekker has written a book you can't put down.
Trustpilot
Copyright © 2022 Thriftbooks.com Terms of Use | Privacy Policy | Do Not Sell or Share My Personal Information | Accessibility Statement
ThriftBooks® and the ThriftBooks® logo are registered trademarks of Thrift Books Global, LLC