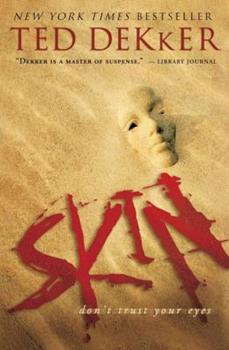 (Part of the Books of History Chronicles Series)

A freak storm has spawned three tornadoes that are bearing down on the town of Summerville. Yet under the cover of the storm looms a much more ominous threat: A vindictive killer known as Red who's left a string of victims in his wake and is now bent on exacting his final revenge on the unsuspecting town. But there is an enigma surrounding Red that the FBI is unwilling to admit-closely guarded secrets of something gone terribly wrong beneath the skin...

Great Book! Like New Condition...because they didnt glue the pages into the back....

Published by Thriftbooks.com User , 6 years ago
Ted Dekker is a fantastic writer, I have not disliked a single book he has written. If you want a thriller, something that makes you turn the pages and the next thing you know its morning, look no further than Ted Dekker! This "Like New" Copy I received, I opened the book and the whole middle (every last page connected with each other, thankfully) fell out onto the floor. Even with this happening you cant complain much because of the steal of the price!

Published by Thriftbooks.com User , 13 years ago
First of all, it is such a relief to read a really good suspense novel, one which doesn't rely on sex or language to keep the reader intrigued. This author has co-authored with Frank Peretti (author of This Present Darkness, Piercing The Darkness, etc.), who is himself a master at suspense, so you KNOW he's gotta be talented! I picked this book up on a whim in a bargain basket, never having heard of the title or author before. To my great delight, this has turned out to be one of my favorite books! Dekker has a way of sucking you into the story, making you want to keep reading even after it's ended. The characters are easy to love, hate, and relate to. They represent real peple with real flaws and realistic reactions to the circumstances they were thrust into. There are so many twists and turns and downright weird happenings in this book that the reader is kept guessing all the way to the last page. Try as you might, it is near impossible to guess at anything between the lines until the author decides to let you in on it. Dekker is imaginative and extremely original, a nice break from all of the predictable suspense novels out there. Readers beware: you won't be able to put this book down!

Published by Thriftbooks.com User , 13 years ago
This book was an amazing breakthrough for Ted's career. Writing a book for the secular market was a smart move because it will cause readers that may be non-believers to want to read his other material that has more Christian-themed messages. In many interviews, Ted Dekker specifically said he was not writing this book to have obvious spiritual concepts but was targeting secular audiences with the simple message of getting past the skin of this world or the external appearance of a person to find out what's really underneath. Yes, the book contains some typos and may seem a bit rushed, but you have to understand what a prolific writer Ted is and the number of books he writes in the space of one year is unprecedented. Overall, it was an awesome, trippy ride. Get this book.

Published by Thriftbooks.com User , 14 years ago
Classic Dekker... mind-bending realities that take you so far you don't know which way is up. The characters aren't everyday, but then that's what I appreciate with Dekker's works. There's also a small reference to the 'Circle Trilogy'. (I find that to be the case with most of his latest releases, but it's not a bad thing.) All in all, a good read. I look forward to the next release.

The "Skin" Isn't What It Appers To Be

Published by Thriftbooks.com User , 15 years ago
I am a huge Dekker fan, and Skin only adds to his collection of great works. I bought the book when it was released, and finished it four days later. It kept me on the edge of my seat the entire time. The story fallows Wendy, Colt, Nicole, Carey, and Pinkus, four strangers being stalked and threatened by a crazy, mustered loving killer by the name of Sterling Red. Red threatens the group, and says he is going to kill the people of Summerville if they do not kill the one of them that is the ugliest. As the story goes on, and people dive deep into the past they learn that ugliness is not in the eyes of the beholder. The en dof the book will have you want to read it over again so you can catch all the pieces to this crazy puzzle. Skin fallows Saint, and Showdown with slight tie-ins to the Circle Trilogy (which in itself is a work of art). I recommend this book to all Dekker fans.

Going beyond the Skin

Published by Thriftbooks.com User , 15 years ago
"Hello, Colt. It's payback time. Red" The red words painted on a gray door plunge police officer Colt Jackson into battle with Sterling Red, serial killer. But Colt isn't the only person Red has a personal agenda against. As a freak storm ravages Nevada, traveler Wendy Davidson is waylaid on her journey to Utah when she comes across a stranded brother and sister seeking emergency medical care. Wendy takes Carey and Nicole Swartz to Summerville, only to find the town under siege with a killer on the loose. Waved down by Wendy, Colt takes the trio to the doctor's house. Relief is short-lived however when a tornado hits Summerville and the four find themselves trapped in the basement. Morning arrives, and with it comes a few surprises. Colt, Wendy, Carey, and Nicole are soon joined by Jerry Pinkus. Thrown together by circumstance, the random group find themselves targeted by Red, and soon discovers a commonality ties their fates together. As Red manipulates them and what they perceive as reality, the five must overcome their differences and suspicions to save themselves and the townsfolk. Ted Dekker's latest offering isn't for the faint-hearted. More cutting edge than SHOWDOWN or HOUSE, Dekker takes readers on a ride which twists and turns to the very end. Following on the heels of SHOWDOWN, HOUSE, and SAINT, all of which contain supernatural elements, SKIN is Dekker's first novel since THR3E that twists its way to a natural, yet unpredictable, ending. This is Dekker's first general market release, which is probably a good thing. His delivery is sure to raise voices within CBA. As SKIN explores the question of true beauty, bodies pile up and ensure that this isn't a cozy read. Despite the general market release, Dekker is quick to assure readers that SKIN isn't much different from his previous books. It contains a strong metaphoric message, but without the obvious Christian labels. As a Christian reader, I found SKIN's theme to be just as powerful as Dekker's earlier books. There is no watering down here. Readers of Dekker's previous works will notice each book from the Circle Trilogy series on contain subtle tie-ins. SKIN is no different. Although the connection to the earlier books is minimal, Dekker has revealed in recent interviews that SKIN shares a mirror scene with an upcoming young adult book, part of a series which will expand on the Circle Trilogy. If you haven't read any of Dekker's previous books, then don't fear. SKIN is a complete standalone which can be enjoyed as such. However, delving into the Circle Trilogy, SHOWDOWN, SAINT, and HOUSE will give you added enjoyment to the experience. If you're looking for a book with strong characters, snappy dialogue, and a mind-bending plot, then SKIN is just the book for you. Putting it down late at night will be your only problem.
Trustpilot
Copyright © 2022 Thriftbooks.com Terms of Use | Privacy Policy | Do Not Sell or Share My Personal Information | Accessibility Statement
ThriftBooks® and the ThriftBooks® logo are registered trademarks of Thrift Books Global, LLC