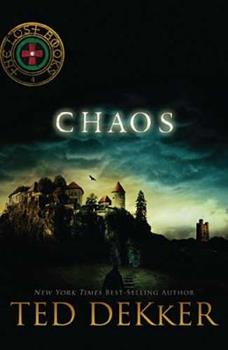 A final quest and an ultimate betrayal. Deep in the mountains of Romania stands a fortress, and deep within that fortress lies a chamber. In that chamber, ruling the dead for over two thousand years, lives one Shataiki bat straight from the bowels of the Black Forest. He seeks the final Books of History with which he will destroy the world. But there are four who stand in the way. The chosen are trapped in a new world of high technology and weapons...

Published by Thriftbooks.com User , 14 years ago
I loved the Chaos book. Can't get enough of Ted Dekker, he is a great author. If you loved his Circle Trilogy books then you will love this book because it is part of a new series of Ted's that goes along with the Circle Trilogy. It is aimed more at teens - they will like it because it uses teen characters. However, as a person out of their teen years I still enjoyed it too. When you listen to Ted's books on CD it really makes them come alive.

Published by Thriftbooks.com User , 14 years ago
Johnis and Silvie are shocked when they wake up in a strange place called Las Vegas in the year 2033. After combining the four lost books and touching one with their blood, they have opened a portal to the Earth of the histories. Darsal and Karas were supposed to follow but are nowhere to be found, and neither are the two books that were in their possession. To make matters worse, the evil Shataiki lord, Alucard, has disappeared into this new reality as well. If he can collect all four books first, he will have the key to finding the remaining three books that will give him ultimate power. They must find the books first in order to save this world, save their friends, and find a way back home. Choas is everything the title promises. This is the most intense novel of the series and the action never lets up for a moment. Dekker's writing sizzles as he takes us on an unforgettable thrill ride with numerous plot turns and a shocking twist in the end that is anything but predictable. It's fun to finally see Johnis and company romp around our world for a change and their experiences and encounters are both humorous and engaging. Dekker even dabbles a bit into vampire lore which actually fits right in with the chaotic nature of the plot. Many questions are finally answered, including the mysterious origins of those creepy worms. In the end Dekker satisfies us with some much needed closure, but as we've come to expect from Dekker, the end is never really the end. The table is now cleverly set for Sinner and I, for one, am hungry for more!

Published by Thriftbooks.com User , 14 years ago
I've followed Dekkers new series "The Lost Books" more out of an obligation and desire to learn more details about the world he created in the original Circle trilogy then out of a desire to be entertained. Chosen, Infidel, Renegade, although they were somewhat enjoyable for the most part the series has been one giant disappointment after another, showing off Dekkers more childish side of writing instead of his serious, deep, and thoughtful style. Although I loved his new novel, Adam, my expectations for Chaos were low. I was not expecting the incredible thrill ride that awaited me within the pages of this book. Where did this come from? Why couldn't the whole series be as amazing as this one entry? It's so mind boggling how Dekker turns a series which was destined to remain a low point in his carrier and make it into something worth remembering. We pick up immediately where we left off after Renegade. Silvie and Johnis have crossed from their reality in which good and evil exist physically in the form of furry bats, white for the good guys black for the bad guys (duh). They are thrown into an environment they are unfamiliar with, sin city itself, Las Vegas in the year 2033. But where are Karas, Darsal? Did they make it through to this reality? And what about Alucard? Where did that stinking old bat get off to? Renegade is by far the hardest book in the series to write a review for. Where the other three books were pretty standard and had few, if any, real shockers, Chaos is nothing BUT one shock after another. Revelation after revelation page after page after page, so many it will make your head spin. One hundred pages into the book I was already pulling my hair out in shock! No, none of these shockers are as good as the ending for Thr3e, but they are on par with any other in a Ted Dekker book. Chaos most resembles Showdown, with an ending which hearkens back to the days of Obsessed. Yes, this isn't a brake from the norm, it's a lot of the same old, but I love the same old and this book was no disappointment. Chaos is a wonderful book which fits perfectly with the Circle Trilogy which made Dekker great in the first place. The wonder and allegory of that brilliant series in brought back in full force, and the tie ins to all the other Paradise books is great. How did I not realize sooner that the villains from Showdown, House, and Skin, are named Black, Red, and White, the names of his original series? WOW! How long has Dekker been planning this? And this might not be the end. The series continues with Sinner in September, and later, if my sources are correct (I read it on Dekkers web sight so I'm pretty sure), Green, another chapter to go along with the original Circle series (but we'll have to wait on that one). Until then enjoy Sinner and Kiss, coming out n September and January of next year. Re read value; High.

Published by Thriftbooks.com User , 14 years ago
Faced with certain death in Alucarde's lair, the only escape for the young recruits is to open a book and touch it with blood. So one by one, they each touch a book and with the exception of one are transported to outside Las Vegas, Nevada. Oddly, though, when they cross over, there is a definitive time change. They left within moments of each other, but arrived years apart. Once in the histories, they're faced with many challenges, one of which is locating each other. However, Alucarde crossed over as well and he's diligently trying to unite the books as well. Will the chosen ones be able to unite the books before the Dark One can? Chaos starts out a bit chaotic. It's quite funny to watch Johnis and Silvie attempt to adjust to `modern' society. It reminded me quite a bit of the humorous side Ted showed in Obsessed and was very effective in setting up the story before the serious part hit. It also kept the first part of the book from being slow and full of redundant arguing. In my opinion, the best start of all the YA books. In Chaos, many questions are answered, but there are still more lingering. While we finally learn the answers to questions like, what happens when the seven books are united? What are the worms? Who is the Dark One? At the end, we know more, but we still don't know all. The heart of Chaos is in the revelation of the Dark One, which I'll leave for you to discover. As usual, Ted hits us with a dose of pure truth. The chaos inside of each person. God's choosing of us and his overwhelming love for us. The heart of the Great Romance. Powerful truth that hopefully sets into the heart of every reader. Another great book and a nice 'fix' until the next installment.

Published by Thriftbooks.com User , 14 years ago
Chaos, the last of the Lost Books series . . . You would think that after three other books in the series and whole other series to contribute to the Books of History Chronicles that things would wear a bit old. But you would think wrong. With this book you come to realize that the boundaries of Elyon's world are limitless, and you learn that the stories Ted writes about the Books of History hold endless possibilities. And Chaos is definitely the cream of the crop. It starts off at a breakneck speed and the speed never slows, only gains speed. Faster than a beauty of a cherry Chevy. Fiercer than a gladiator. And tastier than a Snickers bar. Plot twists a plenty in this book and answers a many. Sure, you may be confused after reading Black, Red, White, House, Showdown, Saint, Skin, Chosen, Infidel, and Renegade, but some confusion is put to rest in this book. And you should be glad to know that many more questions are asked! Also setting up the groundwork for another extravaganza Elyon has in store for his followers, this book ends leaving you completely satisfied and craving for more.
Trustpilot
Copyright © 2022 Thriftbooks.com Terms of Use | Privacy Policy | Do Not Sell or Share My Personal Information | Accessibility Statement
ThriftBooks® and the ThriftBooks® logo are registered trademarks of Thrift Books Global, LLC