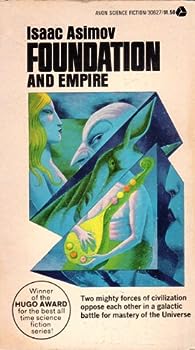 (Part of the Foundation Universe (#14) Series and Foundation (#4) Series)

This description may be from another edition of this product. The Foundation novels of Isaac Asimov are one of the great masterworks of science fiction. Unsurpassed for their unique blend of nonstop action, daring ideas, and extensive world-building, they...

Published by meuszik , 8 months ago
The operatic and fantastical nature of the story's structure quickly becomes overshadowed by the question of where the women are. The correlation of food with she who cook it is made more than once, which is distracting enough, but the theme points towards a subservient mold not unlike that of a model 1950's trophy wife. If not for a plumpily catty and breastily shrill tragedy of narrative featured in chapter nineteen, an operetta all of its own, I wouldn't have taken notice of anyone other than Beta (...), who's main role is to understand the story arch and serve as a caregiver. Implications of colonialism, religion, trade and democracy weigh on a galactic scale, which provoke the reader to question causality and free will. Yet, it always comes back to women being the silent underclass. I can't help but enjoy the principle of the book but must declare it an absolute shame to the genre for this singular reason. Feel the irony, as a prediction of human behaviour over millennia is seen through an exclusively male gaze. (I am male.)

Hari Seldon's plan receives a kick from the Mule

Published by Thriftbooks.com User , 16 years ago
I totally liked the pattern that Isaac Asimov established in "Foundation," the first volume in what we know refer to as the original Foundation trilogy. Hari Seldon created the revolutionary science of psychohistory and mapped out a future for humanity that would allow thirty thousand years of barbarism between the existing galactic empire and the future one to be reduced to only one thousand years. Through the effort of the psychohistorians the Foundation was established with its encyclopedists. Then we saw the rise of the Mayors, the Traders, and the Merchant Princes, each representing a step on the path laid out with mathematical precision by Hari Seldon over the first two centuries of the millennium he plotted out. I was looking forward to a continuing series of Seldon Crises as the Foundation played out the rise of human civilization, thinking that what we had hear with what Arnold Toynbee had done with his study of ancient civilizations extended into a future that covered an entire galaxy. But Asimov was setting us up for something unexpected in "Foundation and Empire"; the idea was that at this stage the Foundation would be threatened by the final power play of the dying Empire. But the universe is apparently tired of Hari Seldon playing with his mathematically loaded dice and has thrown the entire plan into doubt by creating a mutant, nicknamed "The Mule." Now the Foundation, the Seldon Plan and the entire galaxy is facing a new and powerful threat. When I first read "Foundation and Empire" I was rather dismayed at the big change in direction. But, of course, Asimov knew what he was doing. He had already proven the validity of psychohistory, at least within the context of his futuristic novel, and there really is no reason to put out another four books (at two hundred years apiece) to complete the plan. Historians might find this interesting, but Science Fiction fans were going to want more than that from Asimov. Indeed, the Mule proves to be, both in terms of the story and the trilogy, the link between the Foundation and the Second Foundation. The Foundation trilogy is classic science fiction from the genre's self-proclaimed Golden Age, and even if the writing style seems dated or quaint, it remains a seminal series.

The Foundation trilogy is essential

Published by Thriftbooks.com User , 19 years ago
The trilogy is essential, but since Asimov also capitalized on his own genius by writing what seems to be hundreds of lesser Foundation stories, it can all get very confusing and a bit draining. This is the second book in the original trilogy, so it is from a science fiction point of view essential reading. The trilogy itself comes up with two highly memorable characters, Hari Seldon, the psycho-historian, who uses Mathematics to predict the future and establish a "Foundation" that will limit the dark ages after the fall of the "Empire" to a single millenium (as opposed to ten.) He reappears as a hologram at certain points in the story with more or less accurate takes on what is happening in "History" at that point. The other very memorable character is the Mule. He represents the variable that makes predicting "History" mathematically a tricky business at least, not to mention impossible. He is a nasty totalitarian character who strangely in Asimov's hands manages to elicit some sympathy. Asimov is playing with the idea of predicting human behavior scientifically (or controlling it scientifically,) but this character is also a humanistic meditation on how masses of people get overwhelmed by evil social forces like fascism and soviet communism. You can see that Asimov lived through the era of Hitler, Mussolini, Franco and Stalin and that these cult of personality tyrants and the submission of masses of people to their destructive and sadistic wills profoundly affected his view of human nature. Foundation and Empire seems to be an attempt to come to terms with that experience, and so has something to say about the specifics of twentieth century history, as well as about historical philosophy.

The continuation of an epic series

Published by Thriftbooks.com User , 19 years ago
Foundation and Empire is the second of the original Foundation trilogy written in the 1950s. The first book is Foundation and the last is Second Foundation. I enjoyed Foundation but I liked F & E quite a bit more! Foundation consists of five disconnected short stories, too short for adequate development of the settings or characters. F & E is much more focused, containing only two stories, the second of which really impressed me.A quick refresher on the background: The psychohistorian Hari Seldon was able to mathematically foresee the future of human society in the Milky Way. It wasn't pretty. Socio-economic forces were to cause the total collapse of the Trantorian Empire and lead to 30,000 years of anarchy and barbarism before a new empire restored peace and order. However, Seldon saw an "alternate path" that could reduce the duration of the Dark Ages to a single millennium. He established two societies (called Foundations) to bring this change about.In Foundation, we learn how the fledgling First Foundation established itself after Seldon's death and how it grew powerful. In F & E, Seldon is long dead and the First Foundation faces much more serious threats: a war with the dying but still powerful Trantorian Empire and a war with a mutant leader called The Mule who possesses incredible powers. The part about the war with the Empire is a straightforward narrative with a couple interesting twists. The second part about The Mule takes place a few decades later and is written in the style of a mystery, sort of like the first two Robot novels.Since The Mule is an individual of extraordinary power, Seldon's psychohistorical predictions for the First Foundation are in jeopardy because they deal only with masses of people and large scale socio-economic forces. Hence the second part is a more exciting read. :-) Also, until the end of the second part the Second Foundation is a mysterious society on the other side of the Galaxy about whom we know next to nothing. Although I guessed the nature of The Mule's powers, I did not guess his identity and it was a great surprise for me when it was revealed at the end. The events of the last two chapters are stunning and really make you want to rip into the third book. Yet F & E doesn't end on a cliffhanger and is quite satisfying in and of itself. This unique blend is a testament to Asimov's genius as an author. Also, you'll learn why the mutant calls himself The Mule and it's quite enlightening!With novels written later, Asimov tied together three series into one huge one! I recommend reading the entire 14-book series in the following order: the four Robot novels, the three Empire novels, and the seven Foundation novels (the original trilogy plus two prequels and two sequels). So far I've yet to read the last three Foundation books (Second Foundation, Foundation's Edge, Foundation and Earth), but so far most have been excellent and all have been well above average.

Published by Thriftbooks.com User , 20 years ago
As in Foundation, this is actually not a single story. Here are presented two separate episodes in the development of the Foundation toward the establishment of the Second Galactic Empire. The first details the encounter between the growing Foundation and the still-very-powerful Empire. At the forefront is an Imperial General of outstanding ability and charisma. Unfortunately, Hari Seldon, the architect of the Foundation, predicted all this with his psychohistorical calculations. While the general is very successful in his opposition to the Foundation, his very nature ensures his downfall. The second story is quite ingenious, in that the single large failing of Seldon's psychohistory is brought to light. An individual beyond the predictive nature of psychohistory has appeared and done the impossible. While there is a type of mystery presented, Asimov either wanted the reader to know the answer before the characters, or he didn't try very hard to obscure the nature of things. But this is a crucial moment in the Foundation's development, as they seem to be vulnerable after all. This story depends heavily on a plot element present in all the Robot-Empire- and now Foundation Series: psionic abilities. Clearly this was a favorite concept for Asimov, and he never seems to abuse it; that is, it never seems there for its own sake but always represents a fundamental encounter when it appears, and you can bet there are severe ramifications.While I have noted a few complaints about the second of these two stories, this book is still very well written, with action and suspense as good as any I've read. Asimov did such a wonderful job crafting this future history that I can only applaud having had the pleasure to read it. If you like S-F, you will love this whole series, chosen as the Best Series Ever Hugo winner. Need I say more?

Published by Thriftbooks.com User , 21 years ago
First I should say that this is a great book. It is the second book in the Foundation Trilogy. And if you need some help on the order of the books, here tis : 1)Prelude to Foundation 2)Forward the Foundation 3)Foundation 4)Foundation and Empire 5)Second Foundation 6)Foundation's Edge 7) Foundation and Earth. #s 3,4, and 5 are the original trilogy. I have reviewed all of them. They're all good. This particular book has two parts. In the first part the Foundation is faced with the dying but still strong Galactic Empire, and in the second, more interesting part, they face the rising Mule. A few words bout him, he's not what or who you might think he is. The next sentence might be considered a spoiler, so choose to read it or not. The Mule is actually Bobo( this word only appears once in the book, and might be missed). Well, have fun reading!
Copyright © 2020 Thriftbooks.com Terms of Use | Privacy Policy | Do Not Sell My Personal Information | Accessibility Statement
ThriftBooks® and the ThriftBooks® logo are registered trademarks of Thrift Books Global, LLC