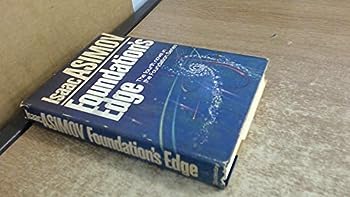 (Part of the Foundation Universe (#16) Series and Foundation (#6) Series)

At last, the costly and bitter war between the two Foundations had come to an end. The scientists of the First Foundation had proved victorious; and now they retum to Hari Seldon's long-established plan to build a new Empire that the Second Foundation is not destroyed after all-and that its still-defiant survivors are preparing their revenge. Now the two exiled citizens of the Foundation-a renegade Councilman and the doddering historian-set out in...

Published by Thriftbooks.com User , 19 years ago
There was a reason why Asimov's original FOUNDATION TRILOGY was voted the best science fiction trilogy of all time by the Association of SF Writers. It covered a vast sweep of post-Galactic rise and fall that brought to mind Gibbons' RISE AND FALL OF THE ROMAN EMPIRE. Asimov's plots are straightforward, but often convoluted and requires a reader's careful attention to hints that suggest a surprise ending. In his original series, the action is set perhaps 50,000 years from now in an empire ruled by Trantor, covering hundreds of millions of worlds. The empire is falling, and only Hari Seldon sees it. He sets up one foundation in the full glare of light and a secret second foundation buried under the ruins of a devastated Trantor.Fully thirty years after Asimov wrote this trilogy, he returned to the same theme, but this time he tries to connect other themes from his past: the destruction of earth from his robot series and his fascination with a long-lived sect of humans who exist only to plot the end of their more short-lived brethren. FOUNDATION'S EDGE tells the stories of two protagonists: Golan Trvize, an upsetter of his superior's political plans, who travels through space to locate the hidden Second Foundation; and Stor Gendibal, a member of the secret Second Foundation, who is on a similar trek to locate Earth. Soon enough, their respective journeys co-incide, but not on Earth. Both wind up on Gaia, a planet that was probably settled long ago from Earth. The complicated plot leaves many loose ends for sequels as both Golan Trevize and Stor Gendibal realize that someone unconnected to either foundation had previously removed all references to Earth from all historical sources and libraries. To appreciate how this novel fits in to Asimov's Foundation universe, it is useful to have first read other works in the canon. I recommend his robot series and Pebble in the Sky. Still, FOUNDATION'S EDGE can be enjoyed on its own basis.

Published by Thriftbooks.com User , 21 years ago
This is as good as any of the original three books of the Foundation Trilogy, and is in my opinion a work of Creative Genius. Some readers have commented on the seeming non-religious philosophy of the book, but although the philosophy is somewhat strange (not to give away the ending), I think that it is compatible with either a religious or non-religious viewpoint, and furthermore Asimov intended further books to follow to develop his themes further. Others have indicated that his characters are psychologically or emotionally lifeless, but the main characters Trevize and Gendibal and Sura Novi and Mayor Branno and Pelorat are as alive as most of Shakespeare's characters without the unnecessary violence. In this book, Asimov reveals himself to be a master of surprise, characterization, conflict and its resolutions, and an openness to ethical and even environmental questions. Most of all, perhaps, he is the ultimate opponent of bureaucracies in this book, whether academic, political, or any others. His conclusion is a bit confusing on this matter, but I do not think it was intentional but rather was dictated largely by the element of surprise and telling a good and entertaining story.

Published by Thriftbooks.com User , 21 years ago
If you read the Foundation Trilogy and anxious about what happened next, get this book as well as Prelude to Foundation, Forward the Foundation, and Foundation and Earth. Also read the robot series connected to Foundation :The Caves of Steel, The Naked Sun, The Robots of Dawn, Robots and Empire.
Copyright © 2020 Thriftbooks.com Terms of Use | Privacy Policy | Do Not Sell My Personal Information | Accessibility Statement
ThriftBooks® and the ThriftBooks® logo are registered trademarks of Thrift Books Global, LLC