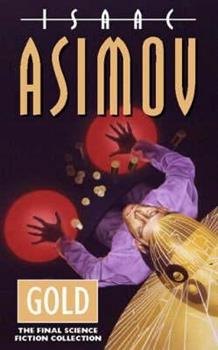 (Book #1.14 in the Foundation Universe Series)

This description may be from another edition of this product. Gold is the final and crowning achievement of the fifty-year career of science fiction's transcendent genius, the world-famous author who defined the field of science fiction for its practitioners,...

Published by RobA , 2 years ago
A year after Isaac Asimov’s death, his publisher collected a beautifully written set of short stories and essays. The majority of these are about the craft of writing. They give a fascinating insight into Asimov’s craft and how he viewed himself.

Published by Thriftbooks.com User , 19 years ago
"The Final Science Fiction Collection [from Isaac Asimov]" is what the cover to GOLD proclaims, and to be honest, I find that to be a rather sobering realization. The Good Doctor was such a prolific author that even now, ten years after his death, the thought of that constant supply of words being silent is not a particularly happy one. So we are left with this collection, from the later stages of Asimov's career, which puts together a lot of pieces that hadn't been anthologized and were fairly difficult to find. The book is divided into three sections; the first, fifteen science fiction short stories; the second, eighteen essays about science fiction; the third, twenty selections about the art of writing science fiction. It's a bit of a haphazard collection with essays and material coming from a variety of seemingly random sources, but for someone looking for those hard-to-find writings this should prove invaluable.The collection of science fiction stories is certainly passable. There's nothing particularly breathtaking or outstanding here, but the consistent level of quality is fairly high. There was really only one story that I seriously disliked, and the rest were at least average or better. A number of the stories would appear to be slightly autobiographical in nature, and it's interesting to see Asimov in a more reflective mood than usual.The essays that deal with the topic of science fiction itself have been pulled from multiple sources. Some of them are editorials from his magazine, while others have been copied from introductions to SF collections. It's this section that gives one the slight feeling that this is merely a cashing in on the popularity of a famous author. Certainly it's odd to see Asimov discussing the particulars of the individual stories and themes that are present in the book he was writing for, but for obvious reasons aren't actually included in this text. Still, despite the strange nature of how they came to be included here, his thoughts and ideas on the subject are quite welcome. Whether Asimov is reminiscing about the "Golden Age" of printed science fiction or talking about the exact role of robots or aliens in the genre, his arguments are presented clearly and the healthy dash of wit familiar to his many fans.The final third of the collection is a subject that Asimov knew well and loved speaking and writing about. He has a lot of tips for young and hopeful science fiction authors, as well as insights into his own creative process. Asimov's approach to describing science fiction is to talk a lot about his own science fiction stories. Not just that he liked talking about his own work (which, of course, he did), but by analyzing criticism and praise of his own writings he demonstrates his own particular way of developing stories. I found this section to be fairly interesting although he had covered this topic in other areas (in particular, his autobiography and in various introductions).My only wish wa

Published by Thriftbooks.com User , 19 years ago
"Gold" is an interesting piece of fiction. Clearly turning autobiographical at times, Isaac Asimov tells the story of an author determined to see one of his more famous works turned into something greater -- a "compu-drama", the brand-new visual medium of the future. It's an engaging story that uses its science fiction trappings to tell a tale about authors, stories, and the place the both of them hold in history. It is this theme along with the ways that different characters interpret the same piece of fiction that give this work its bite.The fictional author would appear to be based, at least somewhat, on Asimov himself. The biggest clue to this is the book that the writer is looking to have produced bears a striking resemblance to one of Isaac Asimov's more celebrated novels. In fact, "resemblance" probably isn't going far enough -- for all intents and purposes, the book being discussed in "Gold" categorically is one of Asimov's more famous stories, at least, in most important respects (there is one section that is hinted to be different, but it seems clear that the bulk of the stories are identical in theme, plot, and characters). Readers who have already read that book will no doubt enjoy picking up some of the references. I had personally greatly enjoyed that book, and I found it quite interesting to get another interpretation of some of the more abstract concepts presented there. Not to say that Asimov explains them away; he merely presents an interpretation of the facts in a way that would be natural to someone trying to produce something so intangible in a visual context."Gold" isn't the best piece of fiction that Asimov wrote during his long and celebrated career, but it should definitely be considered worth reading. The science fiction portions are engaging, but that is really just the backdrop to a more fundamental story. The fictional author's comments on his own work were particularly interesting, especially as one attempts to figure out when he was talking from his own character, and when he was voicing the thoughts of Asimov contemplating his own place in literary history. As I wrote this review, my mind went over the events and I found myself appreciating the story even more. That is always a good sign, and "Gold" is definitely a story worth thinking about.

Not one of his best, but still great, as always

Published by Thriftbooks.com User , 20 years ago
This book is surely not one of Isaac's best books, but still, its a great book as all of him are. If you are interested in stories, and nothing else however, you might be disappointed, for the second half of the book contains essays and articles from the various magazines he was involved(I was disappointed at first). But if you take the time and read them too, you might find them interesting and funny, as they are also writen in Asimov's style... (P.S: I did not yet read the hardcover version - but I guess its pretty much the same - right?)

Published by Thriftbooks.com User , 22 years ago
Masterpiece of a collection. I escpecially liked that story, "Alexander the God," which was cataclysmically cool, not to mention just about every single other story which probably should have gotten Hugos. This book should win a Hugo. When I finished this book, I wanted to stand up and cheer. Isaac Asimov was and still is the greatest science fiction writer EVER.

Published by Thriftbooks.com User , 23 years ago
In this collection of science fiction short stories and stories about science fiction short stories, Isaac Asimov once again writes with that distinctive style of his. Mr. Asimov has always had a clarity of thought and expression that few have been able to match. Wether it be the 500 word essay or 200,000 word novel, Mr. Asimov is able to grab your interest in the opening sentences of each story. This book is a combination of science fiction shorts and essays, some memorable, others. . ."interesting". Although Gold is billed as Isaac Asimov's "final" science fiction collection, I wouldn't be surprised if more undiscovered and unpublished works of Isaac Asimov were to come out in the years ahead. Though not his best material, you'll like this book if you like Asimov.
Copyright © 2020 Thriftbooks.com Terms of Use | Privacy Policy | Do Not Sell My Personal Information | Accessibility Statement
ThriftBooks® and the ThriftBooks® logo are registered trademarks of Thrift Books Global, LLC