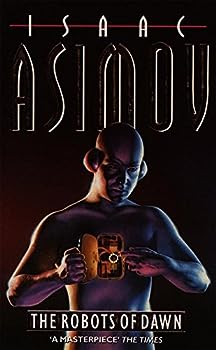 The Robots of Dawn

(Book #6 in the Foundation Universe Series)

This description may be from another edition of this product. A millennium into the future two advances have altered the course of human history: the colonization of the Galaxy and the creation of the positronic brain. Isaac Asimov's Robot novels chronicle the...

Published by Thriftbooks.com User , 14 years ago
The late Isaac Asimov (1920 - 1992) is one of my all-time favorite sci-fi writers. He pertains to the old "hard sci-fi" school that populated the `50s and a successful member of that community by the way. This story is the third and last step in the long friendship between the earthling New York detective Elijah Baley and the robot detective R. Daneel Olivaw. You don't need to read "The Caves of Steel" or "The Naked Sun" to understand this book; it is almost a stand alone book. Situated in a far future Earth, Humankind has divided into Spacers who dwell scattered in fifty worlds (and are the rich & advanced society) and Earthlings that remain in the Mother World, inhabiting overcrowded underground cities. Both groups distrust and despise each other. A roboticide occurs in Aurora an Outer World. Elijah is put in charge of the investigation due to his success in the previous investigations. Once again he will team with R. Daneel. Here a new backdrop is constructed by Asimov; a complete alien society is presented to the reader, with its codes, ecology and history. Bailey still suffers from his agoraphobia but he is in his way to control it. As usual Asimov built his novel step by step, proposing and discarding suspects of committing the roboticide, conforming bit by bit the final picture and solution of the quest. One more detail about this novel, the author reassumes writing sci-fi novels after almost fifteen years. The second book he releases is this one, showing a soft spot in Asimov's preferences. Enjoy Asimov's second disembarkment on sci-fi shores! Reviewed by Max Yofre.

Published by Thriftbooks.com User , 14 years ago
Having read the first two books as a teenager, I came back to the good doctor and certainly I wasn't dissapointed. Some of the other comments here critizes badly the novel, but look, first it is a lot of fun to read; maybe is a little better if you know all the guys from the other novels so you can really identify their pasts and stories in a broader perspective; certainly after Spielberg's AI and then the own I Robot and the Bicentennial Man as movies, you are expecting something with the mind of us modern inhabitants of the first decade of the 21st century. But precisely for that in the light of transhumanism and the things expected with the role of robots and artificial personas in the coming years -just like now how it is with real life and avatars- you realize that the way they do lived in Solaria, were nobody sees each other in the flesh but just as a hologram, the things here about love between human and machine -by the way I just love my powerbook!!!- you see not only Asimov is aging quite well, but he is very well doing his duty of forecast as Verne did. Very surprising for me was to go to Wikipedia and learn at the Daneel R Olivaw enter, that it doesn't end here, the character lives way beyond until foundation, becoming the longest living character of the Asimov's universe covering well into his 20, 000 birthday. Give yourself the time to have a glimpse of your own teenage years, and if you are a young reader, or planning to give to one just have in mind that very surprisingly the book has some mild intense erotic scenes, a surprise in Asimov, and much more since I am molded to have the same erotic interest than the legendary Susan Calvin, but nothing at all to be an indecent book, just a little spicy.

Well worth the wait

Published by Thriftbooks.com User , 19 years ago
Although, in this year 2002, I have just recently finished reading The Robots of Dawn directly after its prequel, The Naked Sun, and thus did not have to endure the 25-year wait between the novels as many who read that book when it came out did, I can assume that they, as I, considered it worth the wait. This is a very good novel, indeed. When Asimov first began writing his robot stories in the 40's, the concept itself was relatively new and bold - and, to many, unthinkable. Of course, when this book finally came out, in 1983, robots were no longer a novelty - and the dictations of their behavior had, by then, moved beyond Asimov's original fundamental Three Laws of Robotics. Still, the conflicts in this book, as in virtually all of Asimov's other robot stories, hinge crucially on those Three Laws, and the complications inherent therein. It is amazing that, as much as Asimov had already written on the subject up to that point, he could still come up with new and novel twists relating to them - but he does, indeed, and does so very well here. Although the actual unraveling of the mystery itself, as in The Naked Sun, never quite reaches the peak of intensity and excitement as did the plot of The Caves of Steel (the first novel in this series), this is, nevertheless, a far more ambitious work than the previous two books - not only in length, but also in scope. With this book, Asimov also begins to tie in the Robot series with the Empire and Foundation serieses (as he does in the sequel, Robots and Empire) to create one grand, monumental fictional universe. This is a testament to the skill and unique visionary perspective of one of the greatest fiction - not just science fiction writers - of the 20th century. Anyone who loved The Caves of Steel and The Naked Sun will undoubtedly love this further amazing edition to the series.

The Return of Asimov

Published by Thriftbooks.com User , 21 years ago
Well, here it is: the final robots mystery starring Baley and Daneel. Personally, I think this falls to second or third place in the trilogy, with The Naked Sun as first place. This is in no way a knock of the book, mind you. This book's plot is more involved, making the mystery aspect even tougher to solve. I had thought of the solution, but never given it any thought. This novel takes place on Aurora, the main Spacer world. Its a pleasent mix--not population saturated like Earth, but not robot city like Solaria. My only sort of complaint--sometimes it seemed a bit too long. However, when I finished it, I wished it was longer. Go figure. Now that this novel is done, and Baley has solved his final case, there is only one place to go-- Robots and Empire

A brilliant third installment to the Robot Series

Published by Thriftbooks.com User , 22 years ago
Just when you thought the first two books "Caves of Steel" and "The Naked Sun" were as good as Asimov gets, here comes "The Robots of Dawn" and knocks them both down in one blow. In this novel, a middle aged Detective Elijah Baley sets out on his most defying investigation ever. His journey takes him to the capital of the Spacer Worlds; the planet Aurora, where he is reunited with his old partner R. Daneel Olivaw. The story has everything that I missed in the first two books, including some romance with the sexy Gladia Delmarre (which Lije was always too cautious about in "The Naked Sun").Asimov hooks you on the "whodunnit" trail right from the start, and gives you a knock on the head right at the end. Truly spectacular, a work of a genuis.In this book, Asimov makes Aurora feel like your own world, describing every bit of detail with superb depictions and without a single sense of tediousness. For the first time, the relationship of robots with humans when it comes to sexual intercourse is explored, and how the three laws of robotics handle it.An absolute MUST read for all those who adored the first two books of the robot series. Isaac Asimov, I personaly salute you.
Copyright © 2020 Thriftbooks.com Terms of Use | Privacy Policy | Do Not Sell My Personal Information | Accessibility Statement
ThriftBooks® and the ThriftBooks® logo are registered trademarks of Thrift Books Global, LLC