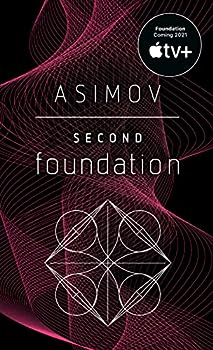 The third novel in Isaac Asimov's classic science-fiction masterpiece, the Foundation series THE EPIC SAGA THAT INSPIRED THE APPLE TV+ SERIES FOUNDATIONThe Foundation lies in ruins--destroyed by a... This description may be from another edition of this product.

Published by Thriftbooks.com User , 17 years ago
The final--and arguably the best--volume of the original trilogy, "Second Foundation" expands Asimov's premise that a solution found in one era is often the grief of the next generation. "Search by the Mule," the first half of this book, follows the race between the Mule and remnant members of the First Foundation to find the location of the keepers of the secret Second Foundation--or whether such a civilization exists at all. The very presence of a mutant like the Mule has thrown off course the inexorable historical trajectory plotted by the psychohistorian Hari Seldon, who (as readers of the previous volumes know) planted the seeds for an accelerated rebirth of a new empire after a thousand-year intergalactic Dark Ages. The second half, "Search by the Foundation," pits several of the leaders of the resurrected First Foundation against the (real or imagined?) threat posed by the Second Foundation. The Foundation books were originally written as a series of eight interconnected stories (plus an opening chapter written for book publication), so their arrangement as a trilogy is rather random--and that leads to this book's only significant fault. The first half of "Second Foundation" is a continuation of the Mule's reign of terror that began in the second half of "Foundation and Empire"; they are the only two stories in the series that share a lead character. Their separation into two books arbitrarily contributes to an odd lack of cohesion, and if it has been a while since you read the second volume you might find yourself confused. (Had Asimov originally planned these books as a trilogy rather than a series, these two halves would have, together, comprised a nearly seamless novel.) On the plus side, what is noticeable in this final volume is how much better Asimov's writing had become by the time he wrote the last story. (The first Foundation story, "The Encyclopedists," was written when he was only 21; the final installment was published when he was 28 and after he had completed graduate school.) In addition, his humor is more mature, his science more speculative, and his characterizations more complex. Even the multiple twists and turns in "Second Foundation" are the sign of a more confident writer. With a choice of over four hundred books, Asimov's fans may differ over which is their favorite, but this is certainly one of his best.

An Exciting Web of Intrigue to Close the Trilogy

Published by Thriftbooks.com User , 20 years ago
Asimov's classic original trilogy comes to a close in this ambitious finale. Here Asimov has really gone over the top with political and intellectual intrigue, which propels the two main plot elements. As with the two previous Foundation novels, there are actually two shorter stories here that take place decades apart. In this installment Hari Seldon's plan gets back on track after being disrupted by the mutant known as the Mule, with the mythical Second Foundation starting to peek out from behind the scenes. Who works for whom, who's a traitor or not, and whether or not the Second Foundation even really exists are all intricately played out by a series of intelligent and conspiratorial characters in relentlessly tangled webs of intrigue. In fact, this book has the most well-defined characters yet to appear in the Foundation series, especially the young Arcadia. The original Foundation saga is wrapped up nicely here as the original trilogy comes to a close. Of course, Asimov's creation is so expansive that there was plenty of room for more speculation and development of the story, leading to the prequels and sequels that Asimov continued to crank out for this classic series.

Everything seems to be explained?

The search for the Second Foundation.

A must-read for anyone who appreciates good writing.

Published by Thriftbooks.com User , 23 years ago
This book is the last in the classic Foundation Trilogy and is a perfect example of a truly captivating story. The series builds up exponentially into this finale and the plot moves faster and faster, not dropping off until the very last sentence and being easily the greatest conclusion to a story I have ever read, leaving me laughing maniacally and wondering how such a profound literary mind could possibly exist. The sheer grandness of it all is simply superhuman, and the best part is the way you would never suspect it before the point, but once you get there, everything falls into place perfectly and you know that no matter how much you had to struggle through the first two books, it was worth the ride. And such a ride it was.
Trustpilot
Copyright © 2022 Thriftbooks.com Terms of Use | Privacy Policy | Do Not Sell My Personal Information | Cookie Preferences | Accessibility Statement
ThriftBooks® and the ThriftBooks® logo are registered trademarks of Thrift Books Global, LLC