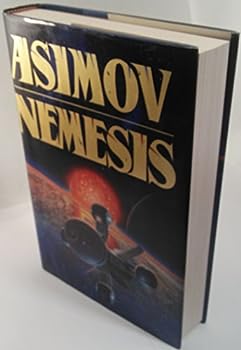 "A totally new and original work that stretches his talents to their fullest . . . welcome back, champ "--The Detroit News In the twenty-third century pioneers have escaped the crowded earth for life... This description may be from another edition of this product.

One of Asimov's best

Published by Thriftbooks.com User , 13 years ago
In the 23rd century pioneers have escaped over crowded Earth. One of the colonies, Rotor, has broken away from the solar system to create its own renegade utopia orbiting an unknown red star. 15 year old Marlene is drawn to the planet orbiting the red star - and the incredible secret the planet holds. I won't reveal too much of its content. I loved the discoveries Marlene made, regarding herself, the conspiracy and most of all the alien planet. An unforgettable book.

Published by Thriftbooks.com User , 19 years ago
Out of all the works of Isaac Asimov that I have read, my favorites are undoubtedly The Foundation Trilogy, and Nemesis. Nemesis is an interesting book. Its not really an adventure like so much science-fiction writte today. No, it's more of a social commentary on the types of changes we could likely expect when humanity reaches out for unknown territory. And it's also the story of a girl who is blessed with an uncanny ability to read people like an open book. Needless to say, it's quite interesting to observe what happens when a person simply cannot be lied to in any way, shape or form. And it's also about her mother and father and how they adapt to and deal with their environment.But the real meat of this book is three-fold. First, it's about a planet in peril. The earth is going to be wiped out when the Sun's closest star approaches it, and no seems to belive the girl who knows. Second, this book is about the alien intelligence living on an inhospitable planet and it's desire to communicate with humans. And thirdly, this book is about the development of super-luminal (faster than light-speed) travel. Asimov explains the science of this like it's an actual phenomena that's really possible (which of course it is not as far as we know). I really enjoyed the science part of this novel. And I found the characters and their actions interesting too...But the real kicker comes at the end of the book, when the man who's dreams of isolation and subsequent experimentation on a small group of humans are destroyed. To say much more would spoil it. But let's just say that the word Nemesis has several meanings, and the plot twist on the last page (as we realize what's REALLY going to happen in the years to come) is awesome. Perhaps the greatest ending plot twist I have ever seen (and a darn cool tie-in to the Foundation Series to boot).If you love Asimov's sci-fi writing, definitely check this one out. Especially if you love the Foundation Trilogy. Highly recommended.

Published by Thriftbooks.com User , 21 years ago
Nemesis is a fascinating piece of work in which Isaac Asimov shows true talent through science fiction. Asimov is able to show the great struggle of many people to save the human race from total destruction through many scientific advances. Each character having very different views and personalities allows situations in the book to create great conflict and the need for critical decisions. For example, Eugenia Insigna, the discoverer of the star Nemesis posing the threat to Earth, wanted to warn the people on Earth and to inform them of new travel techniques in order to understand how to travel elsewhere. The commissioner of her satellite was selfish and would not allow her to reveal this discovery to anyone and wanted to leave the solar system behind. This is just one of the many conflicts that cause the reader to wonder what lies ahead. This suspense is what makes the story interesting. It was very intriguing to see the many different scientific issues Asimov brought up as his characters dealt with everyday survival in new places. Even though much of it was fictional and strange, he made it seem very possible which shows his great ability to manipulate one's mind. The ending to the novel was well done due to the fact that it steers the reader toward a solution, yet it is not definitive. It allows for some imagination and the ability to create an ending that best suites the desires of the individual.

Nemesis is a great read!

Published by Thriftbooks.com User , 22 years ago
I'm 13 years old and Nemesis is the first "real" science fiction I've ever read. I bought this book not knowing what to expect, and I must tell you that I was satisfied with my purchase! The characters were diverse and well rounded, and the story line was unique and interesting. Contrary to my original belief the book was not at all hard to follow; there is a lot of scientific stuff in there but it's not too complicated. I advise you to read this book; you won't be disappointed!

Published by Thriftbooks.com User , 23 years ago
One of Asimov's most popular stand-alone novels, Nemesis combines accurate scientific information, intriguing conjecture, and sturdy characters that you can sympathize with in a setting that is breathtaking. Read this book.
Trustpilot
Copyright © 2022 Thriftbooks.com Terms of Use | Privacy Policy | Do Not Sell My Personal Information | Cookie Preferences | Accessibility Statement
ThriftBooks® and the ThriftBooks® logo are registered trademarks of Thrift Books Global, LLC