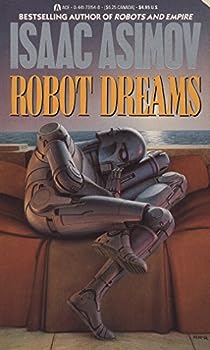 This description may be from another edition of this product. From Isaac Asimov--the bestselling author of I, Robot and Foundation --comes a collection of 20 of his best science fiction stories. "His name is synonymous with all that is best in science...

Published by Thriftbooks.com User , 17 years ago
I expected this to be a collection of robot stories because of the title, but only two are robot stories. They are the first two, and the first one is also a story from _I, Robot_ (which I just re-read). The second one is "Robot Dreams" from which the book takes its title, and it is another Susan Calvin robot story like those from _I, Robot_ but was written in the mid-'80s (_I, Robot_ was written 30 years earlier). It is in the same mold with the earlier stories, but with a nod to advancing technology (small computers, for instance).Many other stories in this collection center on "Multivac," an immense computer. The name is an obvious derivative of UNIVAC, a large, vacuum-tube based computer of the early 1950s. UNIVAC became famous for predicting that Eisenhower would win the 1952 election based on early returns (against pundit predictions that Stevenson would win). That led directly to one story, "Franchise," which takes the ability to sample a small number of votes to predict a total election outcome and drives the idea to an absurd (but nevertheless interesting) extreme.There are a variety of other stories, from ones dealing with beings without bodies to one talking about an alien medical investigator who has come to Earth to find out more about a disease. All are worth the read, and some are truly fascinating and end in very unexpected ways.Ralph McQuarrie provides the cover illustration and several others for individual stories; they are of the style familiar to anyone who has seen original art from "Star Wars" (which he worked on). Asimov's introduction is amusing; he explains what he got right in predicting the future--and what he got spectacularly wrong. He discusses this with respect to both stories in the book (Multivac, for instance) and to other books and stories he had written decades earlier.All in all, this book was a fun read.

Published by Thriftbooks.com User , 17 years ago
Someone wrote that he only knew of one story being in another collection, and another wrote that it's only complete if you have Robot Visions as well. Here's the scoop.Robot Visions has 7 of the 9 stories from I, Robot, 2 stories from Bicentennial Man and one unique to Robot Visions, the title story. The I, Robot and Bicentennial Man stories are all also included in The Complete Robot.Robot Dreams, as others have pointed out, is actually a well-rounded compendium and has only a few robot stories. The title story is unique to this collection, but the three others are included in The Complete Robot (one of those is an I, Robot story).So, the first story is from I, Robot, and the second is the newly-penned title story. The next 5 stories are from Nightfall, then comes the title story from Martian Way. Then come two from Earth is Room Enough and one from Nine Tomorrows. The next two stories are from Buy Jupiter, and then three stories from Nine Tomorrows. There follows the final story from Asimov's Mysteries, then a story that's been in four other collections, including TCR. Finally, the last two stories are from The Winds of Change.

Published by Thriftbooks.com User , 18 years ago
This is a fine collection of the Good Doctor's tales. It's partly an excuse to publish a book with Ralph McQuarrie's haunting illustrations, but it's also a collection no Asimov fan should be without.Most of the stories have nothing to do with robots. However, there _is_ a story written just for the collection, and it's the title piece -- a short and haunting Susan Calvin tale that introduces some _very_ deep ethical ambiguities. You'll want to let this one roll around in your mind for a while.The rest are selected (and selected quite well) from the Good Doctor's lifelong output. Some of them are indifferent, but two of Asimov's own favorites are here: "The Last Question" (my own choice for his very best short story ever) and "The Ugly Little Boy". The usual cliche applies here: these two alone are worth the price of the book.This volume was originally conceived as a companion to _Robot Visions_, and Asimov fen will want the other one too.

Why have I not heard more about this book? It's great!

Published by Thriftbooks.com User , 21 years ago
This is a collection of Asimov's probably 20 best short stories. Only three of the stories have anything to do with robots, unless you consider computers and talking cars robots. This is easily one of the best books I have ever read. I read it in between his robot novels and Foundation novels, and it holds its own quite well against those. Only one of the stories is in any other collection I know of. "Jokester," "The Billiard Ball," and "The Last Answer" are some excellent ones, but I agree that "The Last Question" (as it is named in my book; not "Final Question") is the best story I have ever read. Anybody remotely interested in science fiction at all should definitely buy this book. Before long you will be an Asimov fan for life.

Robot Dreams: Food of the Gods

Published by Thriftbooks.com User , 24 years ago
I am generally not one to rant and rave about a book, but Robot Dreams and in particular the story entitled 'The Final Question', is the exception. I ordinarily hesitate to sing the praises of something on the assumption that there might be something out there that I haven't read that is better; however, The Final Question is without any shadow of a doubt, the best short story I have ever read. Let me elucidate. Starting with the seemingly innocuous question, "Can entropy be reversed?", Asimov proceeds, in a style all his own, to turn the reader's world upside down. When you've finished this story, you can do nothing but close the cover and sit and think for a while. In a piece that is a textbook example of the way a short story should be written, Mr. Asimov somehow manages to address that most basic of all questions, "What is the nature of our Universe, and by extension, what is the nature of ourselves?" As an avid reader on all subjects, I enjoy being challenged by what I read but, speaking politely, the climax of this story, barely more than 15 pages in length, knocked me flat on my behind. No story I have read, before or since, has managed to turn life's basics quite so much on their ear as did this one. I read somewhere that Mr. Asimov always felt that this was his favourite piece of writing, and I have no problem understanding why. Read it...If you thought your world was dark before, I guarantee that "The Final Question", indeed, all of "Robot Dreams", will shed some light on the subject. Sincerely, Tony Hoffmann
Copyright © 2020 Thriftbooks.com Terms of Use | Privacy Policy | Do Not Sell My Personal Information | Accessibility Statement
ThriftBooks® and the ThriftBooks® logo are registered trademarks of Thrift Books Global, LLC